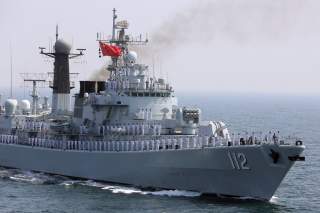 Until the 19th National Congress of the Communist Party of China, Beijing’s state media would continue the same medley on the recently-concluded Army Day Parade. That occasion, to commemorate the People’s Liberation Army (PLA) ninetieth birthday, was an unprecedented affair. Instead of troops goose-stepping and tanks rumbling on Beijing’s immaculately-maintained boulevards the PLA turned out on the dusty tarmac of Inner Mongolia’s Zhurihe military training base, the Chinese analogue to Fort Irwin.

The parade was more than muscle-flexing. It’s also intended to highlight the accomplishments to date of the ongoing PLA structural reforms, and to burnish Chinese President Xi Jinping’s credentials at the Party Congress. The Chinese leader’s message to the army was loud and clear. “Our heroic armed forces have the confidence and capability to defeat all invading enemies and safeguard national sovereignty, security and development interests,” he exhorted.

Xi’s call carries long-term significance, in view of how events have been unfolding in the turbulent Indo-Pacific maritime domain and the PLA Navy’s flurry of activities. Numerous Chinese warships were observed in the Indian Ocean ahead of Exercise Malabar. Frequent PLA forays were spotted close to Japanese home islands. To India, and to Japan, Beijing wryly has this to say: get used to it and don’t kick up a fuss over these legitimate activities.

Then came a Chinese intelligence-collection ship shadowing Exercise Talisman Sabre in international waters off Australia. The PLA Navy’s extent of reach has started to discomfort some, a stark contrast with Beijing’s opposition to foreign military activities in its exclusive economic zone (EEZ). “At the moment what we see is a double standard where China picks the areas of the Law of the Sea that it likes and refuses to implement those that it doesn't,” the Lowy Institute’s Dr. Euan Graham remarked.

It’s not the first time China was called out for this double standard. The frustration is understandable: if other countries, including the United States, interpret international law to allow freedom of navigation and overflight for military vessels through the coastal states’ EEZs, why shouldn’t China conform to this mainstream?

There were attempts to socialize Beijing into the mainstream practice on freedom of navigation and overflight. Back in 2013, responding to the PLA Navy operating within American EEZ, then chief of the U.S. Pacific Command Admiral Samuel Locklear said: “They are, and we encourage their ability to do that.” Then came 2015; didn’t Washington downplay Chinese warships’ transit within twelve nautical miles of the Aleutians as complying with the Law of the Sea Convention’s “innocent passage” regime?

But when such socialization efforts went nowhere, criticisms are levelled at Beijing with the vain hope it will awaken and stop practicing the double standard. One should wonder: does China care? The assumption boils down to an instinct to protect international reputation and moral image. Yet it’s one thing to talk about “face” rather characteristic of the Asian socio-psyche; practicing statecraft quite another. Machiavellian in fact. National interests foremost, who cares what others say?

In case anyone needs reminder: Beijing’s island-building in the South China Sea was subjected to a torrent of criticisms, including from scientists who warned of a marine ecocide by the massive dredging work. And the biggest poke into Beijing’s eye—the Arbitral Award on Manila’s legal challenge, announced in July last year.

The award took China aback, albeit only temporarily. It refrained from escalation and mended ties with its Southeast Asian rivals through enticements. But Beijing has been obfuscating its deeds in the South China Sea. Behind diplomatic niceties championing cooperation with ASEAN, it persists with fortifying those artificial islands. Does Beijing care about being called out by others? Truth is, it doesn’t, but instead passes them off as “defensive” preparations against foreign meddling while others denounced such as militarization.

So let’s get real, Beijing will continue with this lawfare, justifying what it does as following what others have been doing to itself. And for better effect, couch this all within the boilerplate “Century of Humiliation” narrative: China was victimized in the past, but was too weak then to resist. A stronger China now should right the wrong and is beyond reproach.

Consider the snooping on Talisman Sabre. The jingoistic Global Times criticized Australian media for overhyping Beijing’s “low-key presence” and exercise of freedom of navigation in international waters. More relevant was this point it made: “patrolling in Western waters may be an ideal response to Western interventions in the South China Sea issue.” In short, China’s action is justifiable against what it perceives as foreign meddling in the disputed waters.

With its newfound diplomatic, economic and military clout comes newfound confidence—real or misplaced if you may call it—that Beijing will exploit for its interests. Never mind what others say. Only historical grievances matter. Such pent-up resentment translates into strength to challenge those perceived wrongs.

For one, Beijing sought to paint the existing rules-based order as an archaic Western-centric product. The West’s perceived decline fuels China’s quest to rewrite rules, and propagate an alternative vision for rules-based order. Following Donald Trump’s election and the looming anti-globalization wave, Xi was quick to seize the opportunity to present China as the world’s new stabilizing force, in his keynote address in Davao early this year.

We should have long seen it coming. Since Xi came to power, China has begun laying the foundations of this alternative vision—especially targeting the developing world it believes long oppressed under the yoke of Western domination. The “new Asian security concept” propounded by Xi in May 2014 touched on security concepts familiar to faithful students of international relations. But the most glaring aspect was near the end of his long speech: “it is for the people of Asia to run the affairs of Asia, solve the problems of Asia and uphold the security of Asia. The people of Asia have the capability and wisdom to achieve peace and stability in the region through enhanced cooperation.”

In other words: Asians run Asian security affairs, the others should butt out of it. This logically includes the maritime disputes Beijing has long been entangling with its neighbors. The “new Asian security concept” gives Beijing self-conjured legitimacy to rule every extra-regional involvement as “meddling” and therefore, justified for tough counteraction. More insidiously perhaps, this exclusivity concept allows Beijing complete leverage over its weaker rivals shorn of extra-regional support, using its suite of carrots and sticks.

It’s one thing about the PLA Navy exercising freedom of navigation and overflight off foreign coastlines, quite another about defending against foreign encroachment into “Chinese airspace and waters” that are over the twelve-nautical-mile territorial limit surely. But there’s no double standard from Beijing’s standpoint.

Therefore, no point calling out Beijing on its double standard, since it won’t pay heed. While it cherry picks on international rules and norms to pursue interests abroad, including freedom of navigation and overflight for the PLA, it’ll also ensure more resolute response against foreign military activities off its coastline, even in international realms. One needs to brace for more high-octane action from the “heroic” PLA just not too long ago exhorted by Xi to “defeat all invading enemies.” History indicates that the future trajectory doesn’t augur well.

- August 2014: a PLA J-11 fighter jet came within twenty feet of a U.S. Navy P-8 maritime patrol and reconnaissance aircraft in international airspace over the South China Sea, performing a barrel-roll at close range and flashed past the nose of the American plane with its undersides exposed to show its weapons.

- May 2016: a pair of Chinese J-11 jets conducted an unsafe intercept of a U.S. Navy EP-3 reconnaissance plane in international airspace over the South China Sea.

- May 2017: a pair of PLA Su-30 jets confronting a U.S. Air Force WC-135 reconnaissance plane over the East China Sea. One of them even flew inverted directly above the American aircraft.

- May 2017: a pair of PLA J-10 fighter jets flew about 200 yards in front of a U.S. Navy P-3 Orion and began conducting multiple turns which restricted the latter’s ability to maneuver, in international airspace over the South China Sea.

- July 2017: a pair of Chinese J-10 jets intercepted a U.S. Navy EP-3 in international airspace over the East China Sea. One of them flew underneath at high speed, decelerated and pulled up some 300 feet in front of the American plane.

Well-informed observers are aware of these trends. But more troubling are two things. First, the recurrence of these incidents is not for want of confidence-building measures. Three months after the August 2014 intercept, Chinese and U.S. defense authorities promulgated the Memorandum of Understanding on the Rules of Behavior for Safety of Air and Maritime Encounters. A Supplement to this MOU was published the following September. Captain Jeff Davis, a Pentagon spokesman noted after the May 2016 incident that “Over the past year, we have seen improvements in PRC actions, flying in a safe and professional manner.” Perhaps CBMs did have an effect. Yet the Pentagon’s observation began to sound hollow after the recurring incidents in 2017.