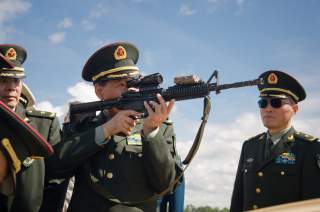 Americans will do well to keep in mind during the next week that global summit meetings are not sporting matches. We should not judge the success or failure of the effort by the kind of apparatus employed to help the Chinese president deplane from his aircraft, nor by some pithy line delivered at a post-summit press conference like a bank shot at the buzzer. Equally troubling is the intensifying blurring of domestic political conspiracy theories with great-power politics. Such stories may titillate journalists and readers alike, but they also contribute to the current world disorder and could lead indirectly to catastrophe.

It is no exaggeration to say the weight of the world is on the shoulders of the two most important world leaders gathering at Mar-a-Lago at the end of this week. Presidents Donald Trump and Xi Jinping must endeavor to keep the world economy on a positive track. Also, they may discuss certain (often overlooked) initiatives vital to maintaining global order, such as United Nations peacekeeping. The critical climate change issue, a major feature of recent U.S.-China summits and bilateral negotiations, is not likely to make it onto the agenda this time for obvious reasons. Major points of tension—which include the South China Sea and the fraught Taiwan issue—could easily scuttle any chance to build a genuine working relationship between the two “political strong men.”

But far and away the most important issue before the two leaders is that of North Korea, and this is as it should be, because the crisis on the peninsula has reached an exceedingly delicate point. It will be essential for the two leaders to move briskly away from the customary blame game that has characterized U.S.-China interaction on the issue for more than a decade. Washington, DC blames Beijing for not using its obvious influence to restrain Pyongyang. Meanwhile, Beijing complains that Washington’s continuous military pressure against Pyongyang is the root of the problem. Both critiques actually have considerable merit. Some ideas are presented at the conclusion of this essay for breaking that particular impasse among others.

However, the main contribution of this pre-summit edition of Dragon Eye will be to make a quick, preliminary survey of Mandarin-language assessments from among a few of China’s up and coming “America hands”[ 美国通]. For instance, The Chinese Journal of American Studies [美国研究] devoted a special issue to the theme of Donald Trump’s election victory with the lead article written by Da Wei [达巍], director of the American Studies Center at the China Institute for Contemporary International Relations [中国现代国际关系研究院]. Da’s appraisal is quite balanced: “Trump, on the one hand continuously attacks China . . .  but on the other hand has expressed a willingness to make deals with China.” After all, he is a businessman [商人] “with ample experience of negotiations and quite accustomed to using “psychological pressure” and strategically employing both “surprise” and “uncertainty.” In general, Da evaluates that Trump’s business mind will be looking for a China policy that is both “low cost and high payoff” [低成本高收益]. Da comes close to endorsing the common charge in the United States that China is insufficiently open to U.S. investment.

Continuing in a rather optimistic tone, Da cites numerous problems with the U.S. “rebalance,” including that the planned naval buildup will take many years. He additionally observes that Trump was widely criticized in the United States for his phone call with the Taiwan leader Tsai Ing-wen from early December. Da explains the hope among Chinese strategists that the Middle East will be the main focus of Trump’s strategy rather than the Asia-Pacific region. Ultimately, Da seems to expect increasing economic frictions, but suggests this could also be accompanied by a decreasing of ideological and geopolitical tensions. Still, there are major concerns articulated here, including the lack of China expertise in the senior ranks of the new administration. Da explains that policy could be “kidnapped” [绑架] by a small group of ideologues with little or no experience of policymaking in the complex Asia-Pacific context. At the conclusion of the piece, Da warns that Beijing must be ready to “retaliate” [回击], responding “action for action” [行动对行动] to any steps by the Trump administration that harm China’s interests. Still, Da ends the piece by calling for an expanded basis for U.S.-China cooperation and warning Beijing against “getting trapped in an arms race.”

Other Chinese analysts are a bit more pessimistic. Zhu Feng [朱锋] of Nanjing University, writing in an early 2017 article for Asia-Pacific Security and Maritime Affairs [亚太安全与海洋研究], characterizes Trump’s victory as a “Black Swan event” [黑天鹅事件] that has “brought to the Asia-Pacific region a new insecurity and anxiety.” Zhu predicts increasing tensions as the United States strengthens the U.S.-Japan alliance and seeks to bring greater sanctions pressure against North Korea. Even on the South China Sea, where Beijing’s hand has seemed to be strengthened of late by the policies of Philippines president Rodrigo Duterte, Zhu notes that Trump and Duterte will likely get along much better than Obama and Duterte. Adding the Taiwan issue to this above volatile mix, Zhu foresees the “trend toward U.S.-China strategic rivalry . . . will certainly deepen,” but he also says it is “most important to avoid . . . a U.S.-China confrontation.” Similarly, Wang Dong [王栋], a rising America hand at Peking University, or Bei Da, presents a rather dark appraisal, which appeared recently in Contemporary International Relations [现代国际关系]. Wang observes that scholars in China have been “excessively optimistic” [过度乐观] with regard to Trump. He briefly entertains the (mocking) theme from an American article that “China Just Won the U.S. Election,” since the new American president is less likely to interfere in China’s internal politics, or continue the “rebalance,” and has subsequently pulled out of the Trans-Pacific Partnership. However, Wang explains that this is a surficial analysis and that a more careful reading of Trump’s team members and the Republican majority in the Congress yields the conclusion that these people “are full of unfriendly attitudes toward China.” [对中国的认识是充满不友好态度的]. He explains that Trump accuses China of “cheating” and “not respecting the United States,” concluding that this new American president intends to “resort to all means of punishment, retaliation and intimidation in order to ‘tame’ China.” [用各种报复, 反击, 威吓手段来‘驯服’中国]. While he does not foreclose the business man open to bargaining interpretation, Wang concludes his analysis with the recommendation that Chinese leaders “cast aside illusions, make preparations, strive for the best [outcome], but prepare for the worst.” [抛弃幻想, 作好准备, 争取最好, 不怕最差].

Even in Wang’s rather gloomy appraisal, he nevertheless suggests that the goal of Chinese policy remains to “continue the stable development” of U.S.-China relations. Indeed, if U.S. and Chinese negotiators are creative and flexible in the coming years, a series of crucial bargains can be struck that serve the interests of both superpowers, as well as global security and the Asia-Pacific more generally. They can, for example, avoid igniting World War III over “rocks and reefs” by agreeing that Beijing must clarify and reform its U-shaped claim in the South China Sea, while Washington should simultaneously endorse the general approach of bilateral negotiations in pursuit of genuine “joint development.” Turning back to the Gordian Knot of the Korean Peninsula, the United States and China can likewise strike a bargain in which Beijing strengthens its security commitment to Pyongyang (obviating North Korea’s reliance on nuclear weapons for regime survival) and Washington agrees to scale back its pattern of exercises. The United States should seriously entertain the possibility of opening diplomatic relations with North Korea in exchange for a freeze on the nuclear program as a first step toward a larger deal that results in denuclearization. One can disagree about the specific proposals and their sequencing, of course, but the eventual cooperative steps must serve the basic interests of all parties involved (yes, including those of North Korea). Unlike in the Middle East, wherein continuous conflict and decades of killing have engendered such a level of animosity that peace agreements are nearly impossible, that is simply not the case in the Asia-Pacific region.

Washington and Beijing both have hawks aplenty. The latter are more vocal than ever and seem to have plenty of material to feast on, while the former can be counted upon to oppose any such practical diplomatic bargaining, wielding as is their wont the well-worn Munich trope. More than a few of these jingoists in both capitals (and their institutional backers) actually gain significant material benefits from continuing and further escalating strategic competition, it is sad to say. Of late, the atmosphere of intensifying U.S.-China rivalry has become so entrenched that it has even become fashionable around Washington to smirk sarcastically at the mere suggestion of a “win-win” compromise (once a core plank of liberal thinking) since this phrase is now apparently derided as “so much Chinese propaganda.” However, those entertaining this point of view might briefly reflect on just what the opposite of that clichéd aphorism actually entails: namely “lose-lose.” In that dark scenario—almost too dark to contemplate—massive wealth will be squandered and it’s likely that innumerable innocents (including far too many young Americans) will be slain as well.