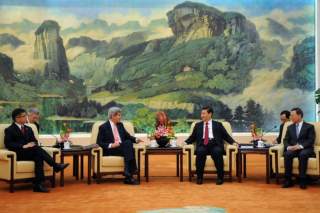 Coming close on the heels of President Barack Obama’s “reassurance trip” to China’s East Asian neighbors in April 2014, Beijing’s deployment of an oil rig protected by over eighty naval vessels in the South China Sea is a deliberate and calculated provocation. China’s move though fits a pattern of advancing territorial claims on its periphery through coercion, intimidation and the threat of force through what I call “paramilitary operations short of war” (POSOW). China’s drilling rig is also a political statement of Beijing’s resolve and capability to control and exploit the South China Sea and deny it to others—and this message is meant as much for Washington as for Tokyo, Hanoi, Manila, Jakarta, and New Delhi. While exploring oil in the disputed waters, the $1 billion oil rig is supposedly drilling a big hole in Washington’s “pivot strategy” insofar as it undermines Washington’s credibility as regional security anchor or security guarantor. In essence, it makes mockery of President Obama’s security assurances to regional countries against Chinese coercive tactics aimed at changing facts on the ground. Beijing calculates that neither the mighty United States nor China’s weak and small neighbors would respond with force to counter Chinese incremental efforts to turn the South China Sea (SCS) into a “Chinese lake.”

The key reason for China’s aggressive posturing on the seas is the tectonic shift in Beijing’s strategic environment that occurred following the collapse of the Soviet Union in 1991. For the first time in its long history, China no longer faces any threat whatsoever on its northern frontiers and this geopolitical development of the millennium largely explains Chinese military’s expansionist moves on its eastern seaboard and southwestern frontiers. It is worth recalling that the successive Chinese dynasties built the Great Wall to keep out the troublesome northern Mongol and Manchu tribes that repeatedly overran Han China. In 1433, faced with increasingly bold raids made by Mongols and a growing threat from other Central Asian peoples to its land borders in the northwest, China’s Ming rulers halted Admiral Zheng He’s expensive ocean voyages so as to concentrate their resources on securing the Middle Kingdom’s land borders. From the eighteenth to twentieth centuries, threats first from the ever-expanding Czarist Russia and then the Soviet Union kept the focus of Chinese military planners on their northern frontiers.

Despite Moscow’s geopolitical concerns about Chinese encroachments in Russia’s Far East and the loss of Central Asia to China’s growing influence, President Putin—faced with isolation by Europe and the United States following Russia’s annexation of Crimea and continuing unrest in eastern Ukraine—seems to have accepted unpalatable terms from China to clinch a massive gas pipeline deal that will diversify Russian energy export markets away from Europe, and make China Russia’s major ally. On a range of issues, Russia, along with China, is challenging the post–World War II international order. Even though China has backed Russia neither on Georgia nor on Crimea, Putin believes the ties between Moscow and Beijing are at their “peak.” If a “Sino-Russian alliance” is being resurrected, then in a complete reversal of roles from the early Cold War era, China—not an economically and demographically shrinking Russia—is the stronger partner in this alliance. As in the past, entanglements in the West have once again led Russia to make concessions in the East. Beijing’s game plan is to make Russia economically dependent on China just as the West has become addicted to the cheap Chinese manufactured goods.

Not surprisingly, media is awash with reports of a “new Sino-Russian strategic alliance threatening to dominate Eurasia heartland,” thereby signaling a “nightmare of Mackinderesque proportions for Washington.” Some envision a Beijing-Moscow-Tehran axis based on energy, trade and security across Eurasia. Though Russia’s pivot to Asia is motivated by turbulence on the western front and comes from a position of relative weakness, Washington nonetheless faces challenges by revisionist states seeking to revise regional balances of power in ways detrimental to U.S. and its allies’ interests.

Thus, the public perception of Asia out of balance is widespread. America’s war-weariness in times of fiscal constraints is apparently emboldening China and Russia. The Obama Administration’s efforts to “rebalance” the U.S. role in the Asia-Pacific were influenced by public perceptions of strategic imbalance and rapidly changing geopolitical equations. The struggle for dominance over “contested commons” (maritime, cyber and outer space) is intensifying. Strategic concerns loom large as China’s growing ambition, power and reach run up against the interests of old, established powers. Despite official claims to the contrary, China is behaving just as other rising powers have behaved in history: it is laying down new markers, drawing new lines in the land, air, water, sand and snow all around its periphery, seeking to expand its territorial and maritime frontiers, forming and reforming institutions, and coercing others to fall in line. For Beijing, history—the Chinese Communist Party’s version of history— trumps international law and norms. The Asia-Pacific region is thus on the threshold of change—the known and unknown; challenges and uncertainties abound. This article outlines major strategic shifts that will shape China’s strategic future and Asia’s geopolitical landscape.

Power in the international system is relative and ever shifting. Over the past three decades, China has demonstrated tremendous ability to plan and mobilize national resources to implement goal-oriented, timely action strategies in economic, diplomatic, and military arenas. The global impact of China’s success will be “Chigantic” (amend the Oxford Dictionary). If China can sustain its growth, China’s gross domestic product (GDP), military and R&D spending could rival those of the United States, albeit not in terms of quality but quantity. China has the potential to emerge as a peer competitor far more powerful than the Soviet Union.

No rising power is ever a status quo power. Rising powers tend to be both risk-takers, impatient, and paranoid powers. They flex their muscles and test the resolve of old, established powers. They seek to benefit from the weakness in resolve—not capabilities—of the established powers by employing asymmetric strategies to chip away at their hegemony. Post-2008 financial crisis, China has transitioned from “hide and bide” policy to “seizing opportunities, taking lead and showing off capabilities to shape others’ choices in China’s favor.” The post–World War II international order has depended on three factors: U.S. alliances, uncontested American maritime dominance and a stable balance of power. All these are under challenge by China’s growing power and purpose. For, China—the biggest beneficiary of the post–World War II order—no longer sees U.S. primacy as serving its interests. One Chinese military officer observed: “American forward presence and alliances constrain China’s future growth and goals in the region.” Beijing dubs U.S. alliances “relics of the Cold War” which must be dismantled to restore what it calls “natural power balance in the region” (translation: a Sino-centric hierarchical order of premodern Asia). It is not in China’s DNA to play second fiddle to any other power. Moscow learnt the hard way in the 1950s. Now it’s the turn of those Americans who have long talked of co-opting China as a junior partner. Moreover, regimes that do not share power or abide by the rule of law in domestic politics do not abide by the rule of law in international politics or share power in world politics.

China’s Asia strategy is to undermine the United States’ credibility as regional security guarantor. Beijing’s diplomatic rhetoric notwithstanding, the “New Type of Great Power Relations” seeks U.S. recognition of China’s primacy in Asia in a geopolitical deal that limits Washington’s regional role and presence, and relegates traditional U.S. allies (esp. Japan) to the sidelines. This push and shove will continue for decades because the Chinese believe that “the U.S. is in irreversible decline, and growing weaker as China grows stronger.” From Beijing’s perspective, the main issue is how to manage, and profit from, America’s decline. The challenge, from Washington’s perspective, is how to manage China’s rise within the U.S.-led order without diluting American role and presence. Who emerges at the top in this poker game will ultimately determine the future of world order. It is against this backdrop that the Obama administration officials have been visiting Asian capitals to reassure U.S. friends and allies about security commitments, and reaffirm Washington’s determination to rebalancing to Asia.

Significantly, China is not rising in a vacuum. Under Shinzo Abe’s leadership, Japan is keen to become a “normal nation.” India has been economically and strategically rebalancing toward the Asia-Pacific for nearly two decades under its “Look East” policy. With the victory of Narendra Modi-led BJP government in May 2014 elections, India may well be back in the reckoning. Since Beijing will not abandon its policy of engaging India economically while strangulating it geopolitically, a revitalized India will form the southern anchor of an Asian balance of power and frustrate efforts to establish Chinese supremacy. Small and middle powers (Singapore, South Korea, Indonesia, Vietnam, the Philippines, and Australia) are also maneuvering for balance and advantage. Indonesia and Vietnam, in particular, are upgrading their naval power, as territorial disputes in the South China Sea escalate. For its part, Russia is using its vast energy resources to stage a comeback on the world stage. Though it predates the Ukraine crisis, the Russian pivot to Asia is set to deepen given Western isolation under sanctions, Gazprom’s thirty-year gas deal worth $400 billion with China, and growing demand for Russian weaponry and energy by China’s neighbors. Russia is unlikely to slide into China’s junior partner’s role without resistance. It is indeed a very complex and crowded geopolitical space out there.