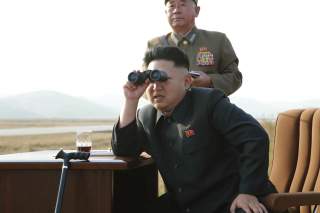 In the escalating crisis between the United States and North Korea, the world can no longer afford to wait for a grand bargain to emerge. We need a compromise that is politically feasible, and we need it soon. An easily verifiable freeze for freeze offers a promising, if not satisfying, path toward de-escalation.

In his first speech at the United Nations, U.S. President Donald Trump personally attacked North Korean leader Kim Jong-un and threatened to “totally destroy North Korea.” In response, in what is believed to be the first direct statement issued to the world under his name, Kim declared that he would “tame the mentally deranged U.S. dotard with fire.” North Korean foreign minister Ri Yong-ho suggested a hydrogen-bomb test over the Pacific Ocean as a possible countermeasure of the young dictator to Trump’s insult. Ri also said that North Korea had a right to shoot down American warplanes because Trump’s comments were a declaration of war.

While the exchange of insults at the highest political level is a recent phenomenon, the United States and North Korea have a long history of mutual distrust. In fact, they rationally distrust each other because of two strategic problems: the inability of the United States to commit to the survival of the Kim regime and the lack of transparency in the autocratic North Korea.

Whatever Washington may offer to Pyongyang, it is dangerous for North Korean leaders to trust the United States and abandon its nuclear weapons. The United States is the strongest military power in the world, has had hostile relationships with Pyongyang, and the Korean War has not officially ended. Once Kim Jong-un gives up on his nuclear weapons, he will be much more vulnerable to external pressure. Although North Korea does have significant conventional capabilities to hurt South Korea, a U.S. ally, the fates of Saddam Hussein and Muammar el-Qaddafi reinforced the North Korean leaders’ attachment to nuclear weapons.

Meanwhile, even if Pyongyang promises to give up or suspend its nuclear weapons development, it is risky for the United States to trust North Korean leaders. Development of nuclear weapons is a secretive process—even for democratic states—and North Korea’s closed political system makes it difficult to monitor compliance. North Korea’s betrayal might not be detected and punished until the regime decides to use nuclear weapons later. Unfortunately, due to military risks and political cost of yielding to pressure, North Korea is unlikely to agree to robust inspections.

In light of these problems, an easily verifiable freeze-for-freeze deal presents the best chance to initiate a compromise between Washington and Pyongyang. To be sure, the specific contents of the deal must adjust to political reality in Washington and Pyongyang. For example, a freeze-for-freeze approach advocated by the Chinese government and doves in South Korea was flatly rejected by the Trump administration.

In the rejected proposal, Pyongyang would suspend missiles and nuclear tests while Washington and Seoul would postpone or scale down their joint military exercises. The idea to suspend the U.S.-South Korean joint exercises, however, has been unpopular so far. As the U.S. ambassador to the United Nations put it, “When a rogue regime has a nuclear weapon and an [intercontinental ballistic missile] pointed at you, you do not take steps to lower your guard.” Respected figures outside the government such as Christopher Hill, former chief U.S. negotiator with North Korea, have also criticized the proposal.

Leaving aside the merit of the Chinese proposal in terms of contents, it should be noted that the proposed deal takes a format that addresses the two strategic problems. As long as North Korea only has to suspend tests, it can maintain the threat of nuclear retaliation against the United States, thereby alleviating the U.S. commitment problem. Moreover, all actions proposed are easily observable, circumventing the incomplete information about North Korea’s behavior. What we need is a deal that takes such a format, but with politically acceptable contents.

A double-freeze deal will not be satisfying to either U.S. or North Korean leaders, but it still reduces tensions and the risk of accidental nuclear war. A not-so-grand bargain is still better than the current state of affairs, in which war of the words between both sides have raised the risk of conflict without addressing the underlying conditions of the crisis.

Tongfi Kim is an assistant professor of international affairs at Vesalius College in Brussels, Belgium. He is the author of The Supply Side of Security: A Market Theory of Military Alliances.

Image: North Korean leader Kim Jong Un looks through a pair of binoculars as he guides a flight drill for the inspection of airmen of the Korean People's Army (KPA) Air and Anti-Air Force in this undated photo released by North Korea's Korean Central News Agency (KCNA) in Pyongyang October 30, 2014. REUTERS/KCNA​