America, Crimea and the Dangers of Hypocrisy 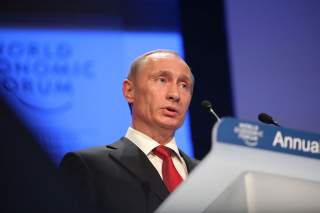 The Trump administration is continuing the policy of its predecessor regarding the Crimea issue. U.S. ambassador Nikki Haley is the latest official to confirm that point. In a speech on February 2, Haley emphasized that the United States intended to maintain economic sanctions against Russia until Moscow returned the peninsula to Ukraine. “Crimea is a part of Ukraine,” she stated bluntly. She reiterated Washington’s firm position in remarks to the UN Security Council on February 21.

That stance is nearly identical to the Obama administration’s policy. Former secretary of state John Kerry blasted Russia’s action from the outset. “You just don't in the twenty-first century behave in nineteenth-century fashion by invading another country on completely trumped up pretext,” he fumed. “Russia is in violation of the sovereignty of Ukraine. Russia is in violation of its international obligations.”

Numerous U.S. officials over the decades have insisted that territorial changes achieved through military force are illegitimate, and that Washington will not countenance such behavior. Crimea is merely the latest application of that policy. George H. W. Bush took an uncompromising stance regarding Iraq’s invasion and occupation of Kuwait, and unlike the Obama and Trump administrations, even waged a war to reverse the result. Addressing a joint session of Congress to justify America’s entry into the Persian Gulf War, he stated: “A puppet regime imposed from the outside is unacceptable. The acquisition of territory by force is unacceptable.”

However, Washington’s position concerning similar behavior by U.S. allies is markedly different. One might ask, for example, when the United States is going to demand that Israel return the Golan Heights to Syria. Israel seized that area during the 1967 Six-Day War, a conflict that Israel initiated as a preemptive measure because Syria and Egypt seemed to be making preparations for an attack on the Jewish state. Tel Aviv has solid security reasons for wanting to retain the Golan Heights. Syrian artillery emplacements there repeatedly menaced Israeli communities in the valley below.

Nevertheless, it is an indisputable case of a territorial adjustment achieved via military force, and Tel Aviv’s later annexation of the territory confirms that it will never be returned to Syria. Yet in marked contrast to U.S. policy regarding Crimea, Washington never imposed sanctions on Israel. To the contrary, bilateral relations have become extremely close in the intervening years.

An equally flagrant U.S. double standard exists regarding Turkey’s invasion and seizure of northern Cyprus in 1974. In that episode, even a strong security justification was lacking. Ankara used isolated incidents of Greek Cypriot violence against Turkish Cypriots as a pretext to occupy some 37 percent of the country. Although Washington initially imposed mild sanctions on Turkey for its aggression, those measures were soon rescinded and forgotten. Turkey proceeded to establish the puppet Turkish Republic of Northern Cyprus. That entity’s lack of meaningful sovereignty was underscored when Ankara orchestrated the exodus of more than one hundred thousand settlers from the Turkish mainland to consolidate the occupation.

One might well ask why Russia’s actions in Crimea were so much worse than those earlier episodes that they warranted the imposition of harsh sanctions. Although Moscow’s security rationale for the annexation was not as strong as Israel’s situation regarding the Golan Heights, it was far from insignificant. With the emergence of a staunchly anti-Russian regime in Ukraine, the Kremlin had reason to fear for the future of its crucial naval base at Sevastopol. Moreover, Russian officials were smarting at the unsubtle U.S. and European support for the demonstrators in Kiev that had overthrown the democratically elected, pro-Russian president Viktor Yanukovych two years before the expiration of his term.

Moreover, Russians point out that Crimea was part of Russia from the 1780s until 1954, when Soviet leader Nikita Khrushchev transferred control to Ukraine. Since Ukraine and Russia were both part of the Soviet Union, that decision didn’t matter much at the time, but with the USSR’s disintegration, having a vital military base in a foreign country became a concern to Russia. Today, Russians have reason to ask why U.S. political leaders and policymakers treat the arbitrary edict made by the communist dictator of a defunct country with such reverence.

Finally, the United States and its NATO allies engaged in a forceful territorial adjustment of their own. NATO waged a seventy-day air war against Serbia in 1999 to detach that country’s restless province of Kosovo from Belgrade’s jurisdiction. Subsequently, in 2008, Washington and its allies bypassed the UN Security Council (and a certain Russian veto) to midwife Kosovo’s unilateral declaration of independence. That set a crucial precedent, which Moscow seized upon later that year in a war against the Republic of Georgia. That conflict assisted secessionists in two regions, South Ossetia and Abkhazia, to break free of Tbilisi’s control.

Given the multiple cases of a blatant double standard, the moral foundation of Washington’s policy regarding forcible territorial adjustments is exceedingly weak. And the current rigid stance regarding Crimea makes no sense from a practical standpoint either. U.S. leaders need to accept the reality that Russia will not relinquish Crimea. Nor will Serbia be able to reclaim Kosovo or Syria regain the Golan Heights from Israel. Despite the latest round in periodic negotiations over the decades, it is also unlikely that the Cypriot government will ever regain sovereignty over its northern territories.

It does not benefit America to persist in a stubborn, futile demand that Russia return Crimea to Ukraine. Washington’s hypocrisy on that issue in light of positions it has taken toward similar territorial seizures by Western powers (including the United States itself) makes that stance even more repellent.