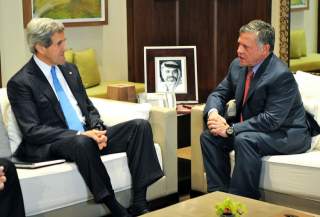 While apprehension among Gulf states about the Iranian nuclear agreement has been widely circulated, responses to the deal from Washington’s non-GCC Arab allies have been less publicized. U.S. allies like Egypt, Jordan and non-Arab Turkey have not had a Camp David of their own to voice concerns to Washington, but their reticent responses are telling symptoms of unease about Iranian subversion and hegemonic aspirations.

In initial diplomatic reactions, surface-level optimism failed to cloak fears of Iran’s mounting regional influence. In Ankara, Economy Minister Mehmet Simsek and Foreign Minister Mevlüt Cavuşoğlu touted the economic boost Turkey will receive from the agreement, but demanded that Tehran “abandon sectarian politics” and discontinue its regional policies. Cairo’s response likewise zeroed in on the deal’s broader implications for Iran's regional interventionism, as evidenced by the Egyptian Foreign Ministry’s uninspired statement expressing hope that the agreement “prevents an arms race in the Middle East...ensuring the region is free of all weapons of mass destruction, including nuclear weapons.” Similarly, Jordan’s Minister of State for Media Affairs and Communications said that the kingdom supports “any deal which asserts peace and security in the Middle East” and “prevents arms race in the region,” but added that it was “following up” on the deal’s details and that Jordanian ministers remained in contact with main parties to the agreement, including Secretary Kerry.

The ambivalence from Amman undoubtedly prompted Defense Secretary Ashton Carter’s meeting with King Abdullah II and visit to Jordan last month. It is also the likely impetus for the resumption earlier this month of the U.S.-Egyptian Strategic Dialogue, postponed since 2009, even though the dialogue focused on counterterrorism, economic opportunities, and cooperation on regional issues and mentioned Iran only in the context of pushing for a “comprehensive implementation” of the nuclear accord.

Underneath the diplomacy, Egypt, Jordan and Turkey view an agreement with Iran as Washington’s green light for Tehran to continue subversive and destabilizing support for proxy forces in the Arab world. Turkey fears that Iran will use its earnings from sanctions relief to ramp up support for Assad, Ankara’s primary foe in Syria. A foiled terror plot backed by the Iran-sponsored Bayt al-Maqdis in northern Jordan on the eve of the nuclear deal has reignited fears that Tehran seeks to undermine the Kingdom’s domestic security. Egypt, aspiring to reassert its regional clout and blunt Iranian expansion into the Gulf, has thrown its support behind the Saudi-led coalition against the Iranian-backed Houthis in Yemen despite Nasser’s disastrous intervention there in the 1960s. Ignored at the time by the United States, King Abdullah II’s 2004 warning of an Iran-led “Shi’a Crescent” encircling the Levant may be imminently becoming reality.

So how will these states really respond? The first suggestion has been that these states develop nuclear weapons of their own. However, this frequently posited proposition is woefully misguided. Iran has been covertly enriching uranium for decades, and a deal scaling back its program is not bound to suddenly provoke a nuclear race. Moreover, these states were never truly concerned about Iran’s nuclear ambitions in the first place. Turkey, Jordan and Egypt are looking to develop their own civilian nuclear programs to confront rising energy insecurity and electricity demand and have turned to Russia to do so, but this does not amount into anything other than economic interest unless Washington wishes to stem Moscow’s Middle East nuclear energy investments for the long-term strategic shifts they could precipitate.

A second possibility—and a far more likely one— is regional conflict escalation. Washington’s rapprochement with Iran, hesitancy to act in Syria, and ineptitude against ISIS in Iraq have left regional allies with the perception that they must take actions into their own hands. Turkey and long-standing Arab powers now consider any real or perceived maneuver by Iran as a major threat necessitating an immediate and heavy response. This is currently playing out in Yemen with lamentable humanitarian consequences. To be sure, Jordan and Egypt are only cautious participants in the coalition against the Houthis—Egypt has deployed warships to protect its own maritime trade channels, and Jordan has provided only a handful of warplanes. Nevertheless, while they are pragmatic enough not to stumble impulsively into regional conflicts, they are too concerned about Tehran’s hegemonic ambitions to stand by. If the coalition succeeds in driving out the Houthis, the campaign in Yemen could serve as a bloody and foreboding precedent for regional states in confronting Iran—something no one really wants.

But what is the third option for these states? Egypt and Jordan will certainly remain close U.S. allies, as each receives over $1 billion in U.S. aid annually and places emphasis on stemming extremism. All three states, moreover, share an interest in joining the United States to fight ISIS, even though Turkey ranks Assad and the Kurds as higher-priority threats. Nonetheless, Egypt, Jordan and Turkey sense Washington’s eroding political will to stay in the Middle East and are hedging their bets against waning U.S. regional presence. Rather than turning to Washington, these states are keeping in close contact with each other—just last week, King Abdullah II met with Muhammad bin Salman, Saudi Defense Minister and primary executor of the Saudi-led intervention in Yemen, to discuss, among other regional issues, Iran’s determination to “interfere in Arab countries' internal affairs to undermine their security.” This reference to Arab countries as a collective group suggests that a threat to any Arab state posed by Iran will be interpreted as an assault on the security of all, a perception that does little to promote durable regional stability.

For their own interests, all states within the region are looking to diversify their options, economically and politically. With trade with Syria shuttered and Iraq closing its western border, Jordan is courting investors from China and Russia to minimize economic and security concerns.  Turkey has finally abandoned its reluctance to get involved in Syria, launching its first airstrikes last month and agreeing with Washington to organize strikes from Turkish bases and establish a buffer zone in northwest Syria, but only because Ankara sees the perfect opportunity to bomb the PKK, halt the Kurds’ military progress, and preempt any bids for Kurdish autonomy. Egypt is receiving increased shipments of U.S. F-16s, missile craft, and weapons systems, but has also intensified cooperation with Moscow in recent months, holding joint naval exercises, striking agreements for natural gas trade and investment, and seeking to purchase arms and advanced weapons systems from the Russians.

These states are seeking to minimize their risks and secure their interests by playing for other opportunities are notable and certainly nothing new. The difference now is that it is happening amid a lack of comprehensive regional strategy from any side, including Washington. The United States is in no way disappearing from the Middle East and remains a major player and partner for these regional states. However, without decisive action and long-term strategy from any side, every actor in the region will find itself with less leverage and fewer options.