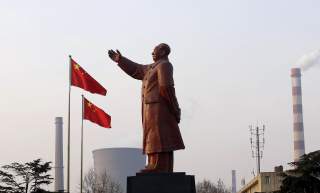 Last week, President Donald Trump renewed his pledge to defend American steel producers against what he described as the unfair practices of overseas competitors. Singling out China in particular, the president declared that these competitors were “dumping steel and destroying our steel industry . . . and I’m stopping it.” He pledged to consider tariffs, quotas, or other similar restrictions on the steel trade to protect American manufacturers from China and other competitors.

Unfortunately, this initiative misidentifies the problem facing American workers, prescribes policy that would aid the comfortable and harm those actually in need, and omits those steps necessary to truly prepare the United States to compete in the economy of the future.

First, while there is arguably a surplus facing the market for steel, it is likely more an effect of changing patterns in global demand than anti-American scheming. Wealthier countries consume less metal than developing ones, and as global poverty has plummeted in recent decades, steel makers have been victims of their own success. Skyscraper booms and infrastructure investments have slowed in China and India, and so countries around the world have seen their steelmaking capacity go increasingly underutilized. Far from flooding the United States with cheap metal, China makes up a tiny sliver of American steel consumption, and it has already been rapidly cutting production to compensate for that falling global demand.

For these reasons, a crackdown on steel imports would be ineffective at best, but it would also risk actively harming the administration’s own stated goals. The domestic steel industry does not need financial assistance (average profit margins are at or near record highs since the Great Recession) and it employs a tiny share of blue-collar workers. Rather, an increase in steel prices stands to hurt the hundredfold more Americans working in the manufacturing sectors that consume steel as an input. Millions of machinists, automakers and construction workers could suffer for what would amount to an act of symbolic protest.

If the Trump administration wants to improve the lot of American workers and stand up to China’s growing market prowess, it needs to look toward harnessing the industries of the future rather than grasping at the economic models of decades past.

Chinese investments in basic science research are on track to soon exceed those of the United States. More than momentary fluctuations in commodity steel demand, this fact should give the administration cause to worry. The American economy has for decades been powered by technological development, and the United States has in turn been an engine for global innovation and progress. Knowledge- and technology-intensive industries make up fully 40 percent of our economy—the highest share of any country in the world—and provide advancements and spillover benefits that backstop the other 60 percent.

This progress is founded in long-term basic science research. Frequently taking years or even decades to realize tangible benefits, the federal government has traditionally taken the lead in funding this research through the United States’ many world-class universities. These institutions not only carry out this research, but also build intellectual and human capital that undergirds subsequent innovation and investment in the private sector. Researchers at the University of Pennsylvania, standing on the shoulders of decades of basic genetic research, developed a breakthrough gene-therapy treatment that shows tremendous promise to combat leukemia and other cancers. They licensed the technique to Novartis, which scaled the treatment, readied it for FDA approval and stands to make a tidy profit while saving the lives of countless Americans.

But the benefit of this model reaches far beyond PhDs in medical laboratories. Horizontal drilling and hydraulic fracturing, now household names for complex industrial practices, were first researched in partnership with the Department of Energy decades ago. The natural gas unlocked by these techniques is powering a massive energy-production boom in the United States that, if properly executed, also promises to mitigate the pace of climate change. This new industry brought with it direct blue-collar employment, but also gave a lift to many sectors of the economy in the form of lower energy prices writ large.

Yet blue-collar employment can also be aided more immediately—and, crucially, with an eye toward the future rather than the past—by policy interventions that have been proven in select American industries as well as more broadly in other industrialized countries. The United States could learn from the much-vaunted German apprenticeship model in its efforts to empower workers with flexible, in-demand skill sets, through public-private partnerships in some of America’s most dynamic sectors. States have also begun rethinking skills education more generally. Coding skills are likely to be an engine for the blue-collar jobs of the future, as programmers increasingly use language more akin to that used by electricians than by journalists.

Beijing recognizes where these economic winds are blowing, and that’s why its spending on basic research and broadening the skills of its workforce have skyrocketed over the last twenty years. In contrast, the United States spends less today as a fraction of GDP than in the sixties and seventies, when the transformational technologies of today were first being envisioned in laboratories. The Trump administration has proposed slashing that distressingly low number even further.

Whether the twenty-first century is another American century or a Chinese one will depend on how each country prepares its workforce for the economy of the future. There is a clear road map for success—one the United States has already pioneered—that calls for embracing technological progress and investments in the competitiveness of the American workforce.

Ignoring this path in favor of costly, symbolic gestures toward a nostalgic past, however, will do little more than willingly cede the next century to China.

Harry Krejsa is the Bacevich Fellow at the Center for a New American Security.

Image: A statue of former Chinese leader Mao Zedong is seen in front of smoking chimneys at Wuhan Iron And Steel Corp in Wuhan, Hubei province, March 6, 2013. China will impose new restrictions on its sprawling steel sector as it battles chronic air pollution, but hopes that the curbs could also help tackle sector overcapacity and strengthen the country's struggling state-owned mills are likely to be dashed. Picture taken March 6, 2013. REUTERS/Stringer.