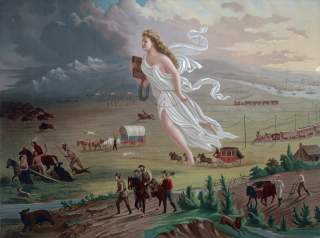 AMONG THE commanding symbols of American civilization, none are more important than empire and liberty. From George Washington’s journey to the Monongahela River in 1754 to George W. Bush’s conquests in Mesopotamia in 2003, observers have puzzled over the relationship between our thirst for dominion and our attachment to freedom. When Patrick Henry argued in 1788 against the “great and splendid empire” he espied in the vision of the Constitution’s architects, he set that in opposition to the liberty that was America’s original resolution:

*** “If we admit this Consolidated Government it will be because we like a great splendid one. Some way or other we must be a great and mighty empire; we must have an army, and a navy, and a number of things: When the American spirit was in its youth, the language of America was different: Liberty, Sir, was then the primary object.” ***

Some variation on Henry’s theme has been played on every subsequent occasion in which the use of force figured—1798, 1812, 1818, 1830, 1846, 1861, 1898 and on to the wars of the American Century. As much as these debates might be dismissed as belonging to another age, without relevance to our globalized world, they express views that go to the core of the nation’s purposes and convictions today. The relation America bears to liberalism and imperialism, to use the modern terminology, is of intense interest in the contemporary world, but in a fundamental sense it has always been such.

DESPITE ITS centrality, the relation between empire and liberty is not easy to characterize. It is certainly complex. The debate over it can rise to great heights of eloquence; it can fall into the labyrinths of obscurity. Both imperialism and liberalism (and their cognates) have a multiplicity of meanings, employed in a multiplicity of contexts. Liberty, instantiated in “the American system,” referred to “written constitutions, representative government, religious toleration, freedom of opinion, of speech and of the press,” as a Kentucky ally of Henry Clay put it in 1822. But it has also signified collective freedom, especially independence from foreign rule, and the freedom reflected in the integrity of the nation’s political institutions.

Empire is an especially slippery concept, tending toward domination in theory but in practice displaying relaxations that concede much freedom to the periphery. While empire is typically defined in terms of alien control and domination, nearly all successful empires relied on indirect means of control. They usually required the cooption of local elites. They were often patchwork and incoherent affairs, with no clear delineation of the lines of authority. As Edmund Burke famously said, describing a world in which “seas roll, and months pass, between the order and the execution,” the first rule of empire was that it couldn’t control everything.

*** “The Sultan gets such obedience as he can. He governs with a loose rein that he may govern at all; and the whole of the force and vigour of his authority in his centre is derived from a prudent relaxation in all his borders. Spain, in her provinces, is, perhaps, not so well obeyed as you are in yours. She complies too, she submits, she watches time. This is the immutable condition, the eternal law, of extensive and detached empire.” ***

Burke reminds us that political structures have been called empires, and figured long in the mind as such, that do not comport with any simple portrait of sheer domination. Burke is one of a handful of great theorists of the empire of liberty, and his admonitions on how to run the British Empire, c. 1775, are not irrelevant to the administration of the American Empire today. Describing the relation England could bear to its American colonists, he wanted “to keep the sovereign authority of this country as the sanctuary of liberty, the sacred temple consecrated to our common faith.” As long as England did this, the more friends among the colonists it would have.

*** “The more ardently they love liberty, the more perfect will be their obedience. Slavery they can have anywhere. It is a weed that grows in every soil. They may have it from Spain; they may have it from Prussia; but, until you become lost to all feeling of your true interest and your natural dignity, freedom they can have from none but you.” ***

Burke’s grand solution to the colonial crisis—keeping Parliament’s sovereignty but conceding the particular issues in the dispute, in the name of peace—fell on deaf ears in 1775, but something of its spirit lived on in the “union of the empire” Americans built for themselves. George Washington spoke with pride of the “stubendous fabrick of Freedom and Empire” created by the American Revolution, one that would be an asylum for the oppressed peoples of Europe. Jefferson wrote of an “empire of liberty” and an “empire for liberty,” neither of them having in their minds’ eye a system of domination. These expressions evoke themes that stubbornly resonate to this day.

But empire had a more sinister meaning, even at the time, signifying an apparatus of power and arbitrary rule that had gone beyond its just limits, and this darker side has been its more usual connotation in political speech over the last two centuries. As John Adams put it on the eve of the American Revolution, in the course of arguing that the British Empire was not an empire at all, but a limited monarchy: an empire is “a despotism, and an emperor a despot, bound by no law or limitation but his own will: it is a stretch of tyranny beyond absolute monarchy.”

Historians have increasingly recognized that American rule, as it played out over time, meant the dispossession of and domination over disparate peoples, a key attribute of the move from continental to hemispheric to global empire. Judging the overall record, it might fairly be said that the United States was most imperial with respect to the peoples of color on its progressively expanding continental and oceanic frontiers (e.g., Indians, Africans, Mexicans, Filipinos, Vietnamese, Iraqis); it was least imperial in its approach to the European system and in its own internal organization (which accorded equality and internal autonomy to the new states of the expanding union). That there is an internal as well as external aspect of the question, however, complicates any easy summation. There might be domination within, as well as domination without, an imperial relation not only to other peoples, but also to one’s own people. The federal union, as perfected in 1787 by the Constitution, was intended by its framers to operate as an antidote to the ills of the European state system, widely seen as having given an unconditional surrender to the theology of force. The new federative system created at Philadelphia, truly a new order of the ages, was anti-imperial in vital respects, and dedicated to peace. But it also as the price of union consolidated domestic slavery in the southern states—a system of domination, wrote Frederick Douglass, “one hour of which was worse than ages of the oppression your fathers rose in rebellion to oppose.” The southern states, in the years before the Civil War, were no less inveterate in describing schemes to interfere in their “domestic institutions” as an imperial project par excellence. “Call it imperialism, if you please,” northern abolitionists answered; “it is simply the imperialism of the Declaration of Independence, with all its promises fulfilled.”

IF EMPIRE is about domination, liberalism is about resistance to domination, in the name of right. Within every liberal, resistance to unjust domination runs deep, and just about all Americans are liberals in this sense. It should come as no surprise that there is a long tradition of anti-imperialism in American political thought. Walter Lippmann could write, in 1944, that “the American antipathy to imperialism . . . is organic in the American character, and is transmitted on America soil to all whose minds are molded by the American tradition.” The appeal to anti-imperialism, however, does not resolve the problem, but rather re-states it, as nominal opposition to imperialism has been part of the justification for every major American war, just as it has figured in all the dissents against them. Faithful to an anti-imperialist ethos, one set of Americans have wanted to stay away from war; another set of Americans, those who urged war or the threat of war, insisted they were being faithful to that same ethos. In this curious interplay of rival anti-imperialisms the relation between empire and liberty is central—and is so for both sides of the argument. The anti-imperial thread in American political thought bespeaks enduring (though clashing) commitments that go to the core of the national purpose.

In U.S. foreign policy and the theory of international relations, this argument among nominal anti-imperialists—some in favor, other opposed, to force or the threat of force—is the most important and enduring antagonism. Unfortunately, the opposition is very inadequately captured by conventional categories in international relations and indeed of political thought more generally, since the two key schools, realism and liberalism, have thinkers on either side of the question. The colloquial terminology of “hawks” and “doves,” who differ mightily in their estimations of the utility and morality of force, gets to the central antagonism better than these conventional categories. Though hawks and doves differ strongly over the use of force, they are invariably, in their own rhetoric and self-imaginings, fierce anti-imperialists themselves. One side says you need empire to preserve or promote liberty; the other warns that the embrace of empire and force is in crucial respects a bargain with the devil, with liberty imperiled in the pursuit.