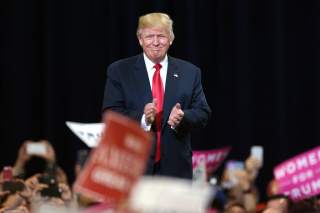 Consistent with his penchant for rebelling against the conventional rules, Donald Trump delivered more of a campaign speech than a traditional inaugural address. There were no paeans to American democracy or freedoms in his address. He didn’t quote any of the Founding Fathers or previous presidents. There was no attempt to reach out to his adversaries or bind the nation together. Instead, he came out swinging as he said, “This carnage stops right here and stops right now” and the “time for empty talk is over.”

Such language will thrill his supporters and horrify his detractors, which is what he wanted. Trump delivered, in pungent, even lacerating, tones, the message that he intends to stick to the themes that he enunciated during the race for the presidency. It wasn’t Trump as peacemaker but revolutionary. His themes weren’t conservative but populist. Positioning himself as a new Andrew Jackson, he poured scorn on elites and said it was time for the American people to “rule” Washington. He wants it always to be America, to borrow from the title of an essay that Patrick J. Buchanan wrote in the National Interest after the end of the cold war, first, second—and last. Nothing else matters.

Unlike Buchanan, who made an abortive run for the presidency in 1992, Trump succeeded in riding the populist tiger to the White House. Now he made it clear that he’s not dismounting. For both George W. Bush and Barack Obama his remarks probably came as a jolt even if they were familiar with the substance. He administered what amounted to a tongue-lashing to his predecessors. The only area in which Trump stuck to the rodomontade of past administrations was in claiming that he would “eradicate” radical Islam. This was as lofty a claim as Bush’s promise to “defeat the evildoers.” Of course it will never happen. This kind of apocalyptic rhetoric has less to today with foreign policy than Sunday school lectures.

But Trump ‘s larger message is abundantly clear: he is essentially saying the liberal postwar order that prevailed even decades after the Berlin Wall collapsed is now null and void. Elites can talk about defending globalization, but Trump wants to scrap it. In his view, it’s every nation for themselves and he intends to see that America comes out in top in the scramble for prosperity and power. As Jessica Matthews notes in the February 9 New York Review of Books, Trump has long complained that America is being fleeced by both its allies and adversaries. In 1987, he published an open letter in the New York Times. It demanded, “End our huge deficits, reduce our taxes, and let America’s economy grow unencumbered by the cost of defending those who can easily afford to pay for the defense of their freedoms. Let’s not let our great country be laughed at anymore.”

It’s doubtful that anyone in Europe or Asia is laughing today now that Trump has ascended to the presidency. Trump declared his fidelity to protectionism: “Protectionism will lead to great prosperity and strength.” Trump’s America First approach could produce the result that Europe—Germany in particular—sees its interests as closer to China than America. In this regard, Chinese leader Xi Jinping’s soothing words about the importance of globalization at Davos on January 17 could lead to closer ties with Europe. “No one will emerge as a winner in a trade war,” he said. China, he added, “will keep its door open and not shut it.”

Where Trump will actually head with his protectionist threats is of course another matter. Is his tough talk a bargaining chip? Or is it an inflexible resolve to impose significant tariffs? Will the proponent of the art of the deal prove to be an artful dealmaker? Or will he plunge the world into recession, if not depression?

When it came to domestic policy, Trump did not allude to the Affordable Care Act, a huge conundrum that the GOP is nowhere close to solving. He made expansive promises of future prosperity. He stated, “We will build new roads and highways and bridges and airports and tunnels and railways all across our wonderful nation. We will get our people off of welfare and back to work, rebuilding our country with American hands and American labor.”

Now Trump has to show that he can do it.