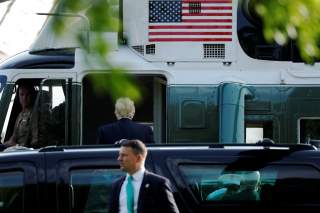 A focus on ensuring power’s availability and heightening self-sufficiency boasts several impressive advantages over the current strategy of orchestrating power’s use and practically defining the value of autonomy out of existence. Principally, the America First foreign policy is safer and cheaper than internationalism because it emphasizes controlling what U.S. leaders can have relatively high confidence in controlling (their country’s own actions) rather than controlling what they don’t have confidence in controlling (the actions of others).

Just as important, America First policies also increase the odds of success for whatever international engagement is needed. It’s easy to understand the benefits of great power, wealth and autonomy for unilateral actions. Yet their crucial importance for multilateral engagement is less well understood. Of course, on some issues, the United States will find it sensible to cooperate with others, and this looks to be especially true for the proverbial “problems that respect no borders,” like disease, pollution and climate change. Nonetheless, because even countries with much in common will invariably approach various international issues with some different views—due to differing characteristics, cultures, historical experiences, etc.—the specific form taken by cooperative solutions will tend to reflect some countries’ preferences more than others. Assuming that Americans wish their preferences to prevail to the greatest extent, they will find that, although some might be secured via suasion, many others will require using the leverage created by power and wealth—either via carrots, sticks or some combination of both.

Lastly, for similar reasons, an America First strategy focused tightly on building strength and wealth and maximizing autonomy can best enable the nation to cope with the chronic unpredictability of world affairs. Yes, governments might one day learn how to foresee major foreign policy challenges and opportunities with some consistency. But the record shows that this day is far off. Prudence therefore dictates that Washington should start placing less emphasis on perfecting its crystal ball and acting on these insights, and more on improving its chances of coping successfully with the many events and developments that inevitably will catch it way off guard. This success in turn will require developing and preserving the largest number of promising options possible. These various options cannot guarantee foreign policy success. But as with multilateral diplomacy, undoubtedly the strong, the rich and the relatively insulated will be have many more and better options—and therefore greater chances of success—than the weak, the poor and the deeply entangled.

Third, an America First strategy would change the definitions of foreign policy successes and of the great power status that, irrespective of results, have so warped Americans’ expectations of appropriate foreign policy behavior. It would dissuade the nation from expecting a continuing stream of military interventions, alliance creation, international regime formation, bilateral and multilateral negotiations, treaty signings, foreign aid initiatives, and human rights pronouncements from Washington. Instead, it would convince the public that the United States is so intrinsically secure, prosperous and self-reliant that its best foreign policy decisions are often decisions to do nothing at all. In the process, America Firstism would helpfully move the nation much closer to a traditional, common-sense view of foreign policy as an exercise in achieving national aims that can’t be achieved through other means, or that can’t best be achieved through other means.

America First leaders, therefore, would foster the understanding that a great power is not defined mainly by what it does on the international stage. It is defined, as emphasized by Kenneth Waltz and other realist scholars, by what it is: the assets it can apply to those efforts when they are necessary or desirable, or can simply keep at the ready. Unlike internationalists, America Firsters would not assume that the country is strong, wealthy or wise enough to shape world events decisively—even with allies and institutional tools. But they would insist that the United States is more than strong, wealthy and wise enough to achieve the goals it should regard as essential—acceptable levels of safety, freedom and well-being—through its own devices, without questing for worldwide reform. And this approach would concentrate its efforts on preserving these capabilities.

Sketching out America First approaches to some of today’s leading foreign policy issues shows how these insights can produce a revamped foreign policy that differs profoundly both from mainstream internationalism and from the partial Trumpian departure—and improves substantially on both.

America First–oriented leaders would agree with President Trump that the nation’s main security alliances in Europe and Asia have become increasingly unsatisfactory arrangements. But in present circumstances, America Firsters would focus not on the economic and financial inequities that irk Trump—and that are indeed difficult to justify given the allies’ prosperity and their far greater vulnerability to aggression.

Instead, they would bridle at the dramatically worsening risk-reward security calculus. Specifically, both NATO and America’s security relationships with Japan and (especially) South Korea are now posing relentlessly growing risks of nuclear war—including an attack on the United States—even though developments in those regions have not directly threatened America’s own security. And although the U.S. nuclear umbrella over these regions during the Cold War also was based on threatening to trigger an all-engulfing holocaust, America Firsters would stress today that conditions have changed substantially in each case.

In Europe, the prime targets of Russia’s designs are not longstanding allies like the United Kingdom, France or Germany. Nor, as a result, are they major centers of military-industrial power—as America’s original containment doctrine had dubbed them. Instead, they are countries such as Ukraine and the Baltic states, which have never been seen as significant American interests for any number of major reasons. They are indefensible with conventional weapons alone—barring the kind of military buildup that neither the United States nor its other NATO allies has ever seriously considered—because they are located literally on Russia’s doorstep. Indeed, for decades, they were part of the Soviet Union with no discernible impact on America’s own security, independence or prosperity. They are economically marginal to boot.

Nonetheless, because they’re full-fledged NATO members, the Baltics enjoy the legal right to U.S. military protection that would need to threaten all-out nuclear war in order to succeed, but whose bluff could well be called because their manifest unimportance gravely weakens the credibility of such threats. Consequently, American leaders face the worst of both possible worlds.

Not that ways out that preserve the policy status quo can’t be identified—chiefly, as suggested, big conventional forces buildups in endangered countries. But even with the needed political will to create them, unless the new units could defeat a Russian assault on their own, their purpose would be serving as tripwires aimed at bolstering deterrence by practically ensuring the escalation of any fighting to the nuclear level.

Although President Trump has greatly stepped up an Obama administration initiative to expand the U.S. military footprint in the region, America Firsters would view these moves as dangerously mistaken. For they would go far toward denying a president any real options on a decision that should always result from choice, not necessity—whether or not to engage in a conflict that could expose American territory to nuclear attack.

An America First–oriented president would recognize that courting such dangers to defend less-than-vital interests veritably defines recklessness. Indeed, even internationalist presidents have appeared to agree—hence their reluctance to station even modest forces in Eastern Europe permanently. Therefore, a genuine foreign policy reformer would focus on bringing America’s goals in Europe and the means available to defend them into a much more sensible balance.

Specifically, an America First foreign policy would start devolving Europe’s defense responsibility to the Europeans, and phasing out the current NATO. The allies are more than wealthy enough to take on the challenge. Moreover, two European NATO members, the United Kingdom and France, already possess nuclear arsenals (the latter spawned precisely by the aforementioned nuclear credibility question, and consequent French skepticism that America would actually “risk New York to save Paris”). Phasing out the U.S. defense guarantee would generate the political will to create adequate militaries by eliminating continued free riding as an option.

Because Western Europe’s hostile takeover would seriously harm (though hardly decimate) American economic interests, an America First foreign policy could justify maintaining rapidly deployable conventional forces capable of reinforcing the region if needed. Such “leading from behind” would also ensure that the military infrastructure and institutional arrangements built up under NATO are not completely wasted. Washington could further assist by selling the Europeans any conventional or nuclear weapons they desired—strengthening the U.S. economy and balance of payments in the process. But the bottom line would be sunsetting today’s NATO by a date certain—possibly within five or ten years of the decision’s announcement.

The risk of the nuclear umbrella to American security is rising even faster in Asia. As widely recognized, North Korea has made unexpectedly rapid progress in building nuclear-tipped missiles that can strike the U.S. homeland. As is not widely recognized, the tripwire forces that the United States seems to be bolstering in Eastern Europe already exist in South Korea, the country most immediately threatened. Therefore, for the first time since America has extended the nuclear umbrella over South Korea, the nuclear war of necessity Washington might need to fight in Seoul’s defense could result in the destruction of an American city. Or two. Or three.