Is America Fulfilling Its NPT Commitment? 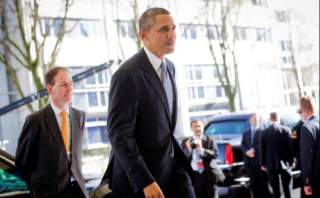 At the UN today, this year’s Review Conference will conclude its assessment of the performance of member-states that signed the Non-Proliferation Treaty, which became international law in 1970. Among the central issues the parties debated was whether the United States and Russia have been fulfilling their commitments under the treaty. To no one’s surprise, there was no agreement on this point.

In the negotiations that led to the NPT, a central issue was the divide between the “haves” (the five declared nuclear weapon states) and the “have-nots” (those pledging to forgo nuclear weapons development). Part of the bargain for the “have-nots” was a commitment from the “haves” to “pursue negotiations in good faith on effective measures related to cessation of the nuclear arms race at an early date and to nuclear disarmament.”

Fortunately, the Cold War is over and with it the nuclear arms race that led to the build-up of vast superpower arsenals. As chart 1 demonstrates, the U.S. arsenal, which included more than 26,000 warheads in 1970, has been cut by more than 80 percent. As chart 2 shows, the Soviet arsenal has been reduced proportionally.

Today the U.S. and Russian nuclear arsenals consist of 4,800 and 4,480 warheads, respectively. Moreover, despite the current stand-off over Russia’s annexation of Crimea and destabilization of Eastern Ukraine, the United States and Russia continue to fulfill their commitments under the 2010 New Strategic Arms Reductions Treaty (New START), which limits both sides to 1,550 deployed strategic warheads—their lowest levels since the 1950s.

In June 2013, in Berlin, President Obama offered a further reduction of deployed strategic warheads to two-thirds of the level set by New START. But given the state of U.S.-Russian relations, as Undersecretary of State for Arms Control Rose Gottemoeller noted recently, “We find ourselves on a plateau.”

At the review conference, the United States drew fire for its decision to “modernize” its nuclear infrastructure. Critics charged that this is blatantly contrary to Obama’s frequently-affirmed commitment to pursue a “world free of nuclear weapons.”

Part of the problem in this case is semantics. Currently, China, Pakistan, India have ongoing “modernization” projects that are adding new weapons with new designs to their arsenals. In contrast, how many new warheads will the U.S. modernization program build? The unambiguous answer is: zero.

Furthermore, critics overlook the oft-repeated commitment by successive American Presidents that as long as other nations have nuclear weapons, the United States will maintain an arsenal meeting three requirements: weapons must be safe, secure, and reliable. Meeting these standards becomes ever more challenging as the United States moves to reduce nuclear stockpiles and sustains its commitment not to test weapons in the atmosphere. Thus the U.S. “modernization” program will not construct any new weapons, but rather refurbish American nuclear weapons labs and facilities to provide confidence that the shrinking American arsenal can meet its essential requirements.

Skepticism about the U.S. commitment to the NPT was dampened by America’s leadership in reaching a framework agreement that will keep Iran in the NPT as a non-nuclear weapons state. If consummated, the current accord between Iran and the P5+1 is intended to assure the international community that Iran’s nuclear program has stopped verifiably short of a bomb. One only needs to imagine what would happen to the NPT if Iran obtained a bomb and, as expected by most experts, this development were followed by a cascade of nuclear proliferation across the Middle East. In that world, it is not difficult to imagine the collapse of the NPT, and even nuclear war in the region.

The NPT and the norms it has established help ensure a more secure future for us all. Despite its disparagers, the United States continues to reduce its weapons stockpile and provide global leadership to prevent a nuclear catastrophe. Looking ahead, the United States must not only continue to demonstrate its commitment to fulfilling its obligations under the treaty, but also make the case to skeptics and critics by persuading them to examine the facts.