America Has a Chance to Finish the War in Yemen 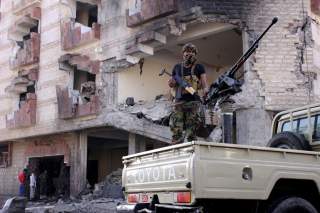 While Iranian and North Korean diplomatic maneuvering distracts the world, the Trump Administration is in serious talks with Gulf Arab officials about widening the war in Yemen.

Americans unfamiliar with Yemen should take more of an interest—at the far south of the Arabian Peninsula, where the Red Sea meets the Indian Ocean, this former U.S. ally has collapsed into chaos. Nearly every Middle Eastern and East African nation has sent troops or arms to one side of Yemen's war or the other. On one side are Saudi Arabia, the United Arab Emirates, Egypt, and several other Arab states. On the other are Iran, its largest proxy militia, and Al Qaeda’s most dangerous offshoot. It is a scene of large-scale daily battles of brigades backed by planes and tanks—some in vast deserts, others in the ruins of large cities.

The United States is deeply involved. America sends special forces on deadly raids and drones with hellfire missiles to attack Al Qaeda and other terrorists. The United States also refuels Saudi and UAE warplanes, supplies spare parts and avionics, and provides significant ammunition and equipment. Allied forces fighting in Yemen are believed to be among the world's largest customers for the U.S. military “Meals Ready to Eat,” known as MREs.

A new debate in Washington asks whether to increase American involvement. Specifically, should the U.S. support a massive operation to retake Hodeidah, Yemen’s fourth-largest city of four hundred thousand people and a port that serves as a lifeline for all UN and international non-governmental assistance? Iran-backed Houthi fighters hold the city and will not surrender it easily. They are threatening another Stalingrad, should the allies attempt to enter. Their motivation is clear—Hodeidah is “the vein that the Houthis are benefiting from,” one Yemeni official told the Wall Street Journal. Without it, Iran will be hard pressed to supply its proxies and continue its war.

Inaction is not an option. Houthis have threatened shipping that passes by Hodeidah, including vast supplies of food and fuel bound for America's NATO allies in Europe via the Suez Canal. Yet Trump officials have thus far avoided committing to their Saudi and UAE allies. Pressure is mounting to do so. Gulf Arab military and political leaders believe a decisive victory at Hodeidah would push the war into an endgame phase, providing a path to checkmate. No one doubts, however, that the endeavor will be costly.

What the Gulf Arabs need most from the United States is real-time surveillance—both satellite and high-flying plane reconnaissance—to guide their artillery, missile strikes, and bombing runs. In the past, they had also asked for American close-air support, whereby U.S. aircraft would drop bombs to support Saudi and UAE ground forces. No one is talking about putting large numbers of uniformed U.S. forces on the ground.

Both the President and his advisers are hesitant. Trump, as a candidate, had, on the one hand, criticized the Iraq war, while on the other supported massive air strikes and special-forces operations in Iraq and Syria to destroy ISIS. There are understandable worries about joining a war that could drag on as the Iraq war did.

But there are strong reasons for the President to accede to the pleas of his allies. First, striking a decisive blow against Iran’s proxy army in Yemen will make it easier to roll back its nuclear weapons program by taxing the regime’s imperial overreach and forcing it to address the needs of its own, struggling economy. Doing so will also weaken Iran’s hand in Syria and Lebanon, where it is waging further proxy wars and supporting Hezbollah, which has killed more Americans than any other terror group besides al Qaeda.

As the United States is already fueling and arming allied warplanes, adding American surveillance is an increase of degree, but not of kind. The effects, by contrast, could be game-changing. Without a seaport, Iran will have to supply its troops by ground and air, where they will be vulnerable to allied aircraft. The volume of cargo that can be moved by plane or truck is significantly less than what container ships can offer. Thus there is a real possibility that taking Hodeidah could end the war.

In appraising the determination of its allies in Yemen, the United States should weigh in the remarkable contributions of the UAE, both to this embattled nation and to the security of the broader region. Under the leadership of crown prince Mohammed bin Zayed, the UAE has emerged as one of America’s boldest and most capable Arab allies. As the Washington Post has reported, during the war in Afghanistan, in which the UAE participated robustly, NATO entrusted UAE pilots to fly hundreds of close air support missions to protect coalition ground forces. On numerous occasions, moreover, the U.S. relied upon the UAE to bomb Taliban fighters while its own troops were under attack in the Afghan south. The crown prince’s commitment to the war on Al Qaeda in Yemen has been unflinching and provided substantial intelligence information in the ongoing international struggle to defeat the group. In fighting as well alongside their Saudi partners to defeat the Houthis, the UAE is vouching for the promise of the Hodeidah strategy—an endorsement and a commitment both worthy of respect.

As the Trump Administration examines its options, it should bear in mind the bigger picture. Iran strives to dominate the Arab world and covets the Islamic holy sites of Mecca and Medina. Its war in Syria and forces in Lebanon have enabled it to assert itself in the Levant to an unprecedented degree. Iran’s backing of the Sunni Islamist Muslim Brotherhood gives it a foothold in Egypt as well as Jordan. It has funded uprisings in Bahrain and Saudi Arabia. Its war in Yemen positions it on the Middle East's southern flank. Meanwhile, it is building nuclear weapons and the Shihab missiles to carry them.

In April when Saudi crown prince Mohammed bin Salman memorably compared Iran’s Supreme Leader to Hitler, he was signaling his awareness of a lesson the world learned with bitter tears and bloodshed—the time to strike a hegemon is before it can consolidate its power.

Ahmed Charai is a Moroccan publisher. He is on the board of directors for the Atlantic Council, an international counselor of the Center for a Strategic and International Studies, and a member of the Advisory Board of The Center for the National Interest in Washington.

Image: A police trooper mans a machine gun mounted on a patrol truck at the site of a car bomb attack outside the Finance Ministry offices in the southern port city of Aden, Yemen November 29, 2017. REUTERS/Fawaz Salman