America Has Military Options for North Korea (but They're All Bad) 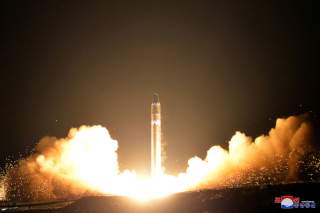 Is the Trump administration considering preventive military action of some sort against the North Korean regime of Kim Jong-un? With various U.S. officials saying that “time is running out” for a diplomatic solution to the nuclear and missile standoff with the DPRK, that may be the case—or at least the intended message.

A review of the plausible military options available to the United States underscores two central points. First, the Trump administration is not alone in thinking about them. Previous U.S. administrations, including Democratic ones, have done so too. Second, however, none of those options really hold water. The risks of escalation are not worth the potential benefits. Consider these options:

One military option would be to prevent North Korea from completing any more long-range missile tests to perfect ICBM technology. This idea was proposed in 2006 by two Democratic secretaries of defense, William Perry and Ashton Carter. The missiles could be destroyed by precision munitions launched from aircraft just before launch. Or they could be shot down in flight by a U.S. missile defense system; based on previous testing, any such shot might have a 25 to 75 percent chance of success.

However, in response, North Korea might accelerate its development of solid-fueled ICBMs, which have a launch preparation process that is difficult to detect. The United States might not shoot down such ICBMs effectively in peacetime or in war. North Korea might also request permission from China or Russia to launch test ICBMs northward or westward rather than eastward, which means the missiles would land in Siberia or the Gobi desert (or even the Arctic Ocean).

Furthermore, this idea does not address North Korea’s growing inventory of perhaps several dozen nuclear warheads (and shorter-range missiles that could carry them) that already put Seoul and Tokyo at risk, including the hundreds of thousands of Americans living there.

To the credit of the Trump administration, the UN Security Council has just imposed additional sanctions on the DPRK. These would, among other things, reduce certain types of fuel imports up to 90 percent and severely squeeze the remittances sent home by North Korean workers living in places like Russia.

A blockade by the United States and allied navies could seem a logical way to ensure that such sanctions were actually respected. Of course, a military blockade is, by standard international law, an act of war. Enforcing it could require the use of lethal ordnance against any North Korean or other ships that refused to allow boarding and inspection. In response to such a blockade, North Korea could be expected, at a minimum, to shoot at any nearby ships that were targeting its own vessels, risking American casualties.

Even more importantly, this option would not curtail trade across North Korean land borders or airspace. Thus, it would neither reduce the existing threat posed by North Korea, nor likely slow further growth of nuclear and missile arsenals in the future. It would tighten the economic squeeze, but fail to reduce the military threat.

Just as Israel preemptively attacked Iraqi and Syrian nuclear reactors in 1981 and 2007, the United States and/or South Korea could take aim at parts of North Korea’s nuclear infrastructure, most likely with stealthy attack aircraft. Specifically, the nuclear reactor that is under construction but not yet operational could be destroyed without dispersal of highly radioactive material, as could the uranium centrifuge complex at that same site.

Unfortunately, such preventive strikes could not eliminate any second uranium enrichment facility that North Korea may have built at an unknown site. Nor could they humanely destroy the operational research reactor that has produced all of North Korea’s plutonium to date. An attack on such a site would create a miniature Chernobyl or Fukushima-like outcome, lethally spreading highly radioactive reactor waste over an area of hundreds of square miles downwind. Such an attack would be unlikely to reach any of the several dozen warheads North Korea already likely possesses, since U.S. officials do not know where they are located.

Like the start of Operation Iraqi Freedom in 2003, when the Bush administration attempted to kill Saddam Hussein in an early “shock and awe” strike, the United States and South Korea could target Kim Jong-un. U.S. law prohibits assassinating foreign political leaders. But if Kim were declared the military commander of a nation still technically at war with the United Nations and in violation of its cease-fire obligations (due to frequent repeated aggressions against South Korea over the years), this issue might be finessed, at least legalistically.

However, the United States might miss Kim Jong-un in any such attempt, as the 2003 Iraqi case demonstrates. Whether successful or not, North Korea might respond with similar attempts against western leaders.

And where would even a successful operation get the United States? Unless U.S. officials were able to message virtually all other senior North Korean leaders in advance, and persuade them to accept amnesty and exile if they chose not to resist, killing Kim Jong-un might just lead to the replacement of one extremist leader with another. North Korean military command and control might also splinter, with some elements opting for a violent response against the United States and ROK rather than for surrender.

In short, whatever their individual appeal, each of these options would appear to promise only mediocre effects against the North Korean threats that matter most to the United States. Let us hope the Trump administration understands as much, and that it is using its threats of military action to create a sense of urgency about the need for North Korean concessions rather than to signal looming attack.