America Has No Deep State 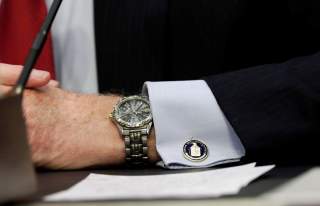 THE CONCEPT of a deep state neatly describes certain patterns of power in some foreign countries, but it has no purchase in American politics, where it serves only as a handy pejorative. A deep state materializes in various forms where democracy is at best weak. Algeria has le pouvoir, comprising senior military officers and some associated civilians who may have more ultimate say over national policy than does the elected president. Many Middle Eastern countries have a mukhabarat, which instills fears of unchecked power going beyond a formal mission of intelligence or internal security. In Russia the siloviki, including veterans of the KGB or other security components who have entered politics, have been riding high since one of their own, Vladimir Putin, acquired the top job. Such terms most often denote a loosely delineated collection of like-minded officials with ties centered in security services and exercising disproportionate power over the lives of the country’s citizens. The United States has nothing like it.

An attraction of the term “deep state” to those who misapply it to the United States is that the user of the term feels no need to adduce specific evidence that such a phenomenon exists and is actively exerting political influence. After all, the very concept of a deep state involves operating in the dark and out of sight. If there were evidence to see, then the deep state wouldn’t be very deep. The idea of a deep state, in other words, is pretty shallow.

The concept originally gained traction on the hard left, usually as an adjunct to ideas about a warmaking military establishment or a privacy-violating intelligence and internal-security establishment. But the attraction of the concept, as a label to be applied to whatever might be opposing or frustrating one’s policy or political aspirations, transcends any left-versus-right lines. When I, as a serving intelligence officer, gave an invited talk in 2004 (by happenstance during George W. Bush’s reelection campaign) to a private outside audience about Middle Eastern affairs that unavoidably touched on the bad turn the Iraq War had taken, a leaked and garbled version got to the late conservative commentator Robert Novak, who made a column out of it. Novak wrote that it was “shocking” that the CIA was waging “war” with the White House, and that this reminded him of how “history is filled with intelligence bureaus turning against their own governments.”

Today, Donald Trump deplores the “Deep State Justice Department” for not doing enough against “Crooked Hillary Clinton” or against James Comey, the FBI director he fired. Lest we fail to realize just how far the deep-state conspiracy supposedly extends, Trump’s son Eric has advised us via tweet that the conspiracy may include not only Clinton and former president Barack Obama but also comedian Ellen DeGeneres. Clearly we are witnessing not some devilishly planned agenda of an entrenched bureaucracy, but instead the flailing of Trumpites against any purveyor of inconvenient truths, or those they fear may yet purvey such truths.

Unlike systems dominated by siloviki or a pouvoir, the United States has, at least so far, a deeply engrained liberal democratic—in the classical, not partisan, sense—political culture. For the permanent bureaucracy, a corollary of this culture is an ethical commitment to apolitical performance of duties and deference to the policymaking role of leaders whom the American people elected. If there were to be any straying from that ethic—which is as well entrenched as any occupationally related culture—then the agencies involved and the individuals within them would become far more vulnerable than they are now. There would be a case for giving each new political leadership the ability to fire the whole bunch. Employees of the security agencies have no incentive to move things in that direction.

The presumption that the bureaucracies concerned have a collective political intent, which is part of the notion of a deep state, runs up against two problems. One is that political preferences are not worn on sleeves in these places. Notwithstanding some well-publicized emails between romantic partners within the FBI, such preferences generally are not discussed in the course of work, because there is no good reason to discuss them. If there were some community of political intent within those bureaucracies, it would be hard for the people who supposedly are part of such a community to discover it.

The second problem is that, to the extent one can glean political preferences indirectly—through things that do not violate the Hatch Act, such as bumper stickers on cars in agency parking lots—one would see that people who work in these agencies, like other Americans, exhibit a diversity of preferences. Likewise, the supposed political leanings that those making “deep state” accusations contend exist in the bureaucracies have been all over the political map. One group of accusers may say that the FBI is filled with Neanderthal heirs of J. Edgar Hoover; a later group says that it is filled with Clinton-coddling lefties. They can’t both be right, and in fact both are wrong.

The federal bureaucracy in the United States is even less apt to play an independent political role than bureaucracies in other advanced democracies such as Japan or Britain, where the permanent government extends to higher levels and the elected political leadership makes far fewer appointments below the ministerial ranks. Herein lies one of the most destructive aspects of the notion of a deep state. That notion is being used as an excuse for such bashing of objective work by government professionals as Trump’s rants against a Department of Justice that refuses to function like Roy Cohn, and his rejection of the intelligence community’s findings about Russian interference in U.S. elections, in addition to his flagitious firing of Comey. The same destructive tendency is reflected in many appointments, including the most partisan and ideological CIA director since William Casey. The fictitious idea of a deep state is doing more to politicize the bureaucracy than any real deep state ever did.