America Has No Plan to Stop Nord Stream 2 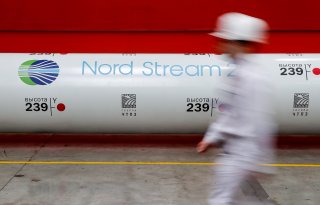 Over the past decade, one project has been a focal point of tension between the political and industrial players within the transatlantic community: Nord Stream 2. The labyrinthine plots and mysteries enshrouding Nord Stream 2 have been enough to confuse it with the work of Belgian surrealist René Magritte. The geopolitical reality is that it is something else entirely. Beyond transporting Russian gas to Germany, Nord Stream 2 furthers Putin’s machinations to circumvent Ukraine, undermining its economic and political leverage all while reversing the course of progress made in the name of energy security. The irony is that this is a project that should hold no merit in the halls of Berlin or Brussels, particularly as Russian forces amass on Eastern Europe’s border. The time has come for Germany to join its neighbors and the United States to support the future vision of Central and Eastern European energy security.

The pipeline-in-disguise, with a story worthy of a star-studded Netflix mini-series, is rife with Russian spy intrigue, political machinations, purchased politicians, creative ownership transfers, and dizzying legal challenges testing the competence of the European Union.

Central and Eastern Europe have also benefited from the energy revolution in the United States driven by the efficient development of shale gas resources. Countries deprived of energy diversity now realize that they have an alternative to Russian gas and the strings that come with it. But let’s be clear, U.S. LNG alone is not enough to eliminate Russia’s grip on the EU market and it never will be. Rather, it helps provide room to breathe and essential leverage to restructure crippling contracts with Russia’s Gazprom. In other words, Russia’s ability to use energy as a means of political coercion is no longer a given.

Today, politicians on all sides use their pulpits to point the finger at Russia, Germany, or the United States for its meddling, short-sightedness, or unilateralism. But they’re missing the forest through the trees. After all, sound foreign policy requires both incentives and deterrents.

Recognizing the attendant energy security risks that came with the completion of Nord Stream 1 in 2011, and Russia’s annexation of Crimea in 2014, twelve EU member-states formed the Three Seas Initiative (3SI) to focus on developing independent energy, transportation and digital infrastructure.

Complete with a $1.2 billion (and growing) investment arm, the 3SI Investment Fund is advised by London-based Amber Infrastructure Group, which is currently assessing a long list of critical infrastructure for development. President Joe Biden knows from his experience on the Senate Foreign Relations Committee and his many trips to Ukraine the value of a European-led initiative designed to promote economic linkages that foster opportunity, prosperity, and security.

Biden now has a strong tool in the U.S. International Development Finance Corporation and the U.S. commitment of up to $1 billion to help Europe realize its energy vision through the Three Seas Initiative. These funds, with $300 million currently available, represent the first tranche of U.S. investment into the next chapter of Europe’s energy story. However, these funds, committed under the Trump administration, have yet to be dispersed by the Biden team.

As economies around the world emerge from the shocks of the coronavirus pandemic, it is more important than ever that the United States step up as a strong partner that can offer viable alternatives and investments for the future of the energy sector. Europe is in need of pipeline interconnections, import terminals at key European ports, and critical storage expansion and modernization. These projects and more could even expand further optionality and leverage for Ukraine. Of course, this also means promoting the deployment of renewable technologies, creating truly independent energy production for European consumers. In other words, Europe needs infrastructure capable of fulfilling current demand, while also meeting the needs of the clean energy transition. The United States and Germany just so happen to be best positioned to export the necessary know-how and innovation.

Establishing a new State Department Czar for Nord Stream 2 might be too little too late, especially as vulnerable European nations prepare for the next winter heating season. Secretary Antony Blinken should not only fully execute his duties under law to ensure Nord Stream 2 is not realized, but also urge Congress and identify resources within the administration to quickly present Europe with the resources to complete the right pipelines. A joint U.S. and German financial commitment to the Three Seas Initiative would go far to undo the damage of Nord Stream 2.