America and Iran: The Morning After a Nuclear Deal 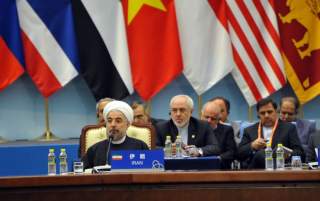 Fast-forward to July 21: The Joint Plan of Action (JPA) between the so-called P5+1 and Iran has been replaced by the recently signed comprehensive agreement, negotiating an end to a dispute that has lasted a dozen years over Iran’s nuclear program. Now that this major international security concern has been resolved, what’s in store for U.S.-Iranian relations? Will the seeming thaw expand into greater strategic cooperation? Will we finally see that highly anticipated meet and greet between Presidents Obama and Rouhani at this year’s UN General Assembly? What has become apparent over the past few months is that there seems to be an appetite in the White House and in Tehran for testing the waters on whether cooperation on issues beyond the nuclear issue is possible. While presuming ongoing negotiations do not unravel, any meaningful relationship between the United States and Iran after a comprehensive agreement will undoubtedly depend on its successful implementation.

Successfully implementing the agreement cannot be overstated. If either side of the agreement violates its terms, confidence-building will regress and the prospects of a resurrected political, economic and perhaps even military conflict will increase, much to the contentment of hardliners in Washington and Tehran, but ultimately to the detriment of U.S.-Iran relations and regional stability.

For Iran, complying with the provisions of the agreement will certainly include ensuring transparency into its nuclear program through the agreed monitoring and verification mechanisms of the agreement such as the Additional Protocol and other supplemental inspection measures. It will also include redesigning the Arak heavy water reactor to greatly limit the amount of plutonium it can produce. As part of the agreement, Iran could also be required to remove the centrifuge cascades at the Fordow uranium-enrichment plant and convert the facility into a nuclear research and development center. These are just several among many measures that Iran could be required to implement through a comprehensive agreement. Judging by Iran’s implementation of the JPA and its cooperation with the International Atomic Energy Agency (IAEA), there is reason to be optimistic in its technical ability and political will to comply with a long-term comprehensive agreement, particularly since it will receive extensive sanctions relief in return. Implementation of the comprehensive agreement in Iran could, however, encounter unforeseen bumps if, for instance, hardline elements within the Iranian government such as the Revolutionary Guards, the Majles (Iranian parliament) or the judiciary decide to restrict Iran’s seemingly improving relationship with the United States. Further, not achieving results in a timely manner could risk subjecting the Rouhani administration to a political “I told you so”, reducing his influence within Iran’s ruling establishment. For these reasons, the Supreme Leader’s continued support for the ongoing negotiations, the final outcome and more importantly, the Rouhani team at-large will be critical in countering the obstructionist tendencies of hardliners.

For the United States, complying with the comprehensive agreement will undoubtedly require sanctions relief which could be problematic, particularly as it relates to lifting congressionally mandated sanctions enacted into law. Since the mid-1990s, Congress has legislated seven acts targeting Iran’s energy, financial and trade sectors. Many of these sanctions can be temporarily waived by the president for a period of 180 days to a year, depending on the statute; however, as noted by the National Iranian American Council (NIAC), if the Obama administration relies solely on offering continually renewed temporary waivers, Iran could respond in kind with nuclear concessions that are limited and reversible. The president cannot remove sanctions passed by Congress through an executive order. The repeal or amendment of the congressionally enacted sanction must follow the same legislative process all bills must undergo to be passed and signed into law which will require presidential leadership on Capitol Hill to overcome the unpopularity of sanctions relief with lawmakers on both sides of the aisle. The president will need to embark on a similar campaign to the one he initiated last fall/winter when Congress tried to pass additional sanctions after the JPA was signed. The White House lobbied Capitol Hill intensively by sending delegations led by Vice President Biden and Secretary Kerry and also invited committee staffers and lawmakers to the White House for special briefings. This was done in concert with public statements by the President and others in the administration who opposed further sanctions. Timing could play a role in the Administration’s lobbying of Congress particularly as midterm elections are nearing and early polls are indicating that Democrats could lose the Senate, giving the President even less pull on Capitol Hill than he currently has.

U.S.-Iranian Relations after a Comprehensive Agreement

From a broader U.S.-Iranian-relations perspective, the successful resolution of the nuclear issue and the unprecedented level of bilateral discussions that have taken place between Washington and Tehran over the past year can be used as a stepping stone to cooperation on an array of regional and international issues of common concern. Reportedly, Iranian President Hassan Rouhani indicated during his visit to the UN General Assembly last September that U.S.-Iranian relations had to start with one step: resolving the nuclear impasse to build confidence so that further steps could be taken. After all, thirty-five years of mistrust and enmity cannot be forgotten so rapidly as evidenced by the Obama administration’s rejection of Iran’s UN ambassadorial nominee.

To be sure, many areas of overlapping strategic interests between the United States and Iran could serve as areas of further regional cooperation. Both countries have an interest in stabilizing Afghanistan and Iraq; both would like to see a significant decrease in sectarian strife across the Middle East; and both would like to see the crisis in Syria resolved in a way that prevents the country from becoming a breeding ground for extremism. Other areas of cooperation could also include countering drug trafficking out of Afghanistan, combating piracy in international waters, or working with Iran to become an alternative source of natural gas to Europe, negating the need for Russian supplies during this time of deteriorated relations between the West and Russia.

For the United States, managing the relationship with Iran after a comprehensive nuclear agreement will require continued engagement and leadership at the senior levels of the administration. In fact, nuclear talks picked up pace in secret bilateral meetings at the direction of the Obama administration after President Rouhani assumed office. Both countries could opt to pursue other issues of common concern in similar fashion, only to disclose it publicly if a breakthrough or agreement is made. In doing so, they can leverage the relationships that have developed over the past year. There has already been an unprecedented amount of interaction at the highest levels of the State Department and the Iranian Foreign Ministry, including phone calls and bilateral meetings between Secretary of State Kerry and Foreign Minister Zarif as well as interactions between Under Secretary of State Wendy Sherman and Deputy Foreign Minister Abbas Araghchi. These engagements will be crucial in moving U.S.-Iranian relations forward as it may be some time before diplomatic relations are normalized. With that being said, both sides will likely be prudent in moving the new bilateral relationship forward. As Iranian Foreign Minister Zarif indicated: “Iran will prudently manage its relations with the United States by containing existing disagreements and preventing further tensions from emerging unnecessarily, thereby gradually easing tensions.” As others have pointedly remarked, the United States does not naively think that Iran will become its new “BFF”.

Bilateral cooperation beyond the nuclear issue could prove difficult as ideological differences continue to divide both countries. Despite these differences, both sides share common concerns in areas where deep divisions exist. Case in point: Syria. The United States and Iran support opposing sides in Syria, however, both countries oppose the influx of extremists and the increase in fundamentalism in that country. Further impediments could stem from U.S. regional allies who oppose a thaw in U.S.-Iranian relations. However, contrary to what some in Israel and Saudi Arabia believe, a collaborative U.S.-Iranian relationship on common-cause issues does not have to be at their expense. Tehran has no interest in a patron-client relationship, as NIAC’s Research Director Reza Marashi puts it, and is interested in a competitive yet cooperative relationship with Washington akin to Russian and Chinese relations with the United States. The United States understands this and is testing to see if both countries can go from being “enemies” to being “rivals”.

Needless to say, a comprehensive nuclear deal could be the beginning of a strategic recalculation in Washington and Tehran and could lead to further regional cooperation. It could all begin on July 21.

Navid Hassibi is doctoral student with the Research Group in International Politics at the University of Antwerp and was recently a Visiting Scholar at the Elliott School of International Affairs at the George Washington University.