America, Japan and the UK: A New Three-Way Alliance against China? 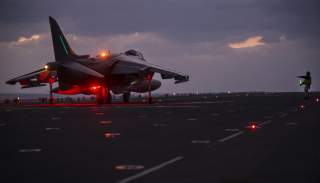 In January 2016, standing on the flight deck of the USS Ronald Reagan aircraft carrier based in Japan, the UK defence secretary, Michael Fallon, spoke of Washington’s commitment to a “three-way alliance” between the United Kingdom, Japan and the United States. He stated that the three countries would develop their commitment to interoperability by working closely together in the future. This is significant because it comes at a time when there are serious questions about stability in the region, and when the East and South China Seas may become crucial issues in relations between Beijing, Washington and Tokyo.

Putting this rhetoric into practice, on October 20, 2016, the chief of the Japanese Maritime Force and the chiefs of the British and U.S. navies sat across the table from each other at the Pentagon to sign a trilateral cooperation agreement. This agreement commits all three navies to closer cooperation, with increased exercises and joint patrols in the future. Signed at the service-level, this agreement sets forth a roadmap for what it calls “mutually desired strategic effects.”

In the context of an increasingly uncertain world, we are seeing more and more states aligning with each other in nontraditional security relationships at the global level. These alignments are nontraditional in the sense that they are not formal alliances, but rather informal and ever-expanding arrangements. Covering a host of different areas, they are in many ways a reaction to the complex level of threats facing liberal democracies these days. Considering Britain’s imminent departure from the European Union, forming alliances with other powerful nations around the world is fundamental. With the United Kingdom, United States and Japan each being liberal democracies and having vested interests in the maintenance of the international rules-based system, they make natural bedfellows.

Focusing closer on the relationship between the UK and Japan, the current bastion of UK-Japan security cooperation is the 2+2 meetings. These have been held annually since 2015. At these meetings, the foreign and defence secretaries from both sides come together, usually for two days of meetings, to discuss a range of common areas of interest. The 2+2 arrangement allows both states to talk about areas of common concern, which allows them to signal both each other, and third-party states about their intentions and interests.

During the January 2016 2+2, both countries affirmed their support for the rule of law in the East and South China Seas. They also expressed a full commitment to Ukrainian sovereignty, adding their concern over North Korea’s missile and nuclear program. To those listening, the 2+2 is perhaps a hint of the security preferences of both the UK and Japan. Other purposes of the 2+2 meetings include helping to socialise each other towards common security interests and enabling both countries to create a framework for bilateral security cooperation.

In the last January 2017 2+2, both countries signed the Acquisition and Cross-Servicing Agreement (ACSA) to facilitate closer bilateral defence logistics. This agreement will enable the two militaries to cooperate abroad on combined exercises and peacekeeping operations, alongside humanitarian assistance and disaster relief missions. Ultimately, this will increase the efficiency of both country’s forces. So, for instance, British tankers will be able to refuel Japanese aircraft, or Japanese ships might be able to refuel British vessels, and so on. An ACSA is really the first step in the holy grail of interoperability for conventional militaries. This agreement improves future cooperative expediency because it removes the need for further individual case-by-case agreements.

The tightening of UK-Japan relations comes at a time when rising powers in Asia-Pacific are causing critical uncertainty in the region and beyond. This has led to policymakers strengthening alliances around the world. The United Kingdom and Japan are a strong example of such an alliance that has been redoubled in recent years.

Another significant area of future cooperation between London and Tokyo includes a joint research project on Chemical and Biological Protection suits and other weapons systems. In an age of shrinking defence budgets and rising threats, it makes sense to partner with other liberal democracies, sharing useful technology and pooling precious research and development funding. This follows the success of the first round of talks of a new Joint New Air-to-Air Missile. This sharing of technology is significant because it builds a framework for ever-closer collaboration between both countries for the foreseeable future in a world where nations are choosing their alliances extremely carefully. In a time of growing insecurity, such partnerships are to be welcomed.

Image: An AV-8B Harrier takes off from the flight deck of USS Bonhomme Richard. Flickr/Department of Defense