America Loses a UN Ambassador—And Is Better Off for It 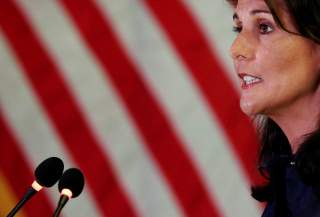 The surprise announcement of U.S. Ambassador to the United Nations Nikki Haley’s resignation from her postmarks what is likely to be yet another shift for the Trump administration’s foreign policy, most notably in the area of human rights. In an administration that has abdicated U.S. leadership on human rights and adopted some of the most destructive human-rights rhetoric and policies in recent memory—such as separating migrant families and detaining children, reinstating and dramatically expanding the Global Gag Rule, banning immigrants and refugees from Muslim majority countries, and embracing and lauding authoritarian leaders around the world, among many others—Haley was often the lone voice on Donald Trump’s national-security team to publicly raise human-rights issues, albeit selectively. However, with her absence and depending on who Trump selects as her successor, any concern for human-rights issues, rhetorical or otherwise, is likely to disappear entirely from Trump’s national-security team. Certainly, Secretary of State Mike Pompeo and National Security Adviser John Bolton have shown no concern for human rights.

As Trump’s first female appointee, the daughter of Indian immigrants, and an outspoken critic of then-candidate Trump, Haley’s appointment was seen as a welcome development in the chaotic early days of the Trump administration. During her tenure as Ambassador to the UN, Haley spoke out against atrocities in Syria, North Korea, China, and Myanmar, advocated internally for the United States to support the establishment of a commission of inquiry into atrocities committed in Yemen, publicly condemned rights violations by Russia and Saudi Arabia, and convened the Security Council’s first thematic debate on human rights (i.e. not tied to any specific country).

However, Haley’s promotion of human rights should not be overstated. For instance, Haley was integral in the U.S. decision to pull out of the UN Educational, Scientific, and Cultural Organization, or UNESCO, an organization that works to promote peace and global cooperation through education and mutual understanding, claiming the organization was biased against Israel. She was also a key voice in the U.S. decision to pull out of the UN Human Rights Council—a move that was announced the same week that the UN high commissioner for human rights labeled the Trump administration’s family separation policy “unconscionable” and right before the UN special rapporteur presented a report on extreme poverty in America—again citing bias against Israel as well as its flawed membership structure. Haley even went so far as to attack human-rights advocacy groups like Amnesty International and Human Rights Watch, accusing them of siding with Russia and China by opposing her attempts to reform the council in her image.

What’s more, Haley also supported the decision to cut all funding to the UN Relief and Works Agency—which provides lifesaving humanitarian services to millions of Palestinian refugees in the West Bank, Gaza, Jordan, Lebanon, and Syria—marking a stark departure from previous bipartisan policies separating humanitarian aid from politics. This departure will have devastating effects on refugees in the region. Under her watch, the United States also announced that it would cut funding to the Office of the High Commissioner for Human Rights. Furthermore, Haley repeatedly threatened UN member states who did not support the United States at the UN, warning that the United States would “take note of each and every vote” that went against U.S. policies and priorities, which Trump explicitly stated meant that the United States would cut foreign aid to those countries who voted against the United States.

U.S. withdrawal from these UN bodies demonstrated a lack of commitment to these rights-promoting institutions unless they were willing to cave to U.S. demands and priorities. And by withdrawing from these institutions, the United States has now ceded this space to autocratic regimes like China, Saudi Arabia and Russia. If the Trump administration, and Haley, really cared about protecting human rights and holding rights abusers accountable, then they would ensure that the United States had a seat at the table of rights-promoting institutions rather than abandoning them entirely.

Such actions by Haley demonstrate that while she may have paid lip service to some human-rights issues during her tenure as UN ambassador, she saw human-rights promotion as largely transactional, a bargaining chip to be used for broader U.S. political gains rather than an obligation to protecting and helping the world’s most vulnerable. With her departure, though, even this lip service seems likely to disappear.

At a time when some of the world’s worst human-rights abuses continue unabated—from Uighur concentration camps in China, to the brutal wars in Syria, Yemen, and South Sudan, to recent violent attacks on journalists—it is alarming to think there will be no advocate for human rights at the highest levels of the Trump administration, no matter how insufficient and flawed that advocacy may be. Hopefully, Haley’s successor will be up to the enormous task of promoting human rights in the face of an administration that openly undermines them, and, at a minimum, work to prevent further damage to the global architecture meant to uphold basic human rights.

Carolyn Kenney is a senior policy analyst for National Security and International Policy at the Center for American Progress.