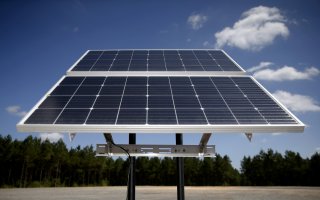 The United States has long understood energy independence as a central part of its national security efforts. But as climate change commitments and technological innovations transform the global energy industry, America is falling behind.

In the past, the United States was hawkish on energy security. An early adopter of drilling technology, America controlled oil production throughout the first half of the twentieth century, and when the industry hub moved abroad, it swiftly consolidated the position of major U.S. oil companies overseas. At the same time, America continued innovating at home, and by 2018, newfound advances in fracking technology had made the United States energy independent for the first time since 1957. This was rightly celebrated as a major achievement: As Rep. Fred Keller (R-PA) wrote in a 2020 op-ed for The Hill, “American energy independence means a more secure nation, a more secure economy, and a more secure future… America’s fortunes are on the rise.”

But not all energy mixes are created equal, and America is unlikely to be sustainable in the long term.

Simply put, the United States’ sudden shift from importer to exporter owes itself to the shale revolution—a drilling innovation that allowed it to significantly increase its domestic production of oil and gas. And to be sure, oil and gas have long been the cornerstone of American energy production, running virtually uncontested by alternative energy sources throughout the late twentieth and early twenty-first centuries.

But now, the clean energy industry is booming. In the past two decades, investment has skyrocketed, prices have dropped considerably, and renewables have nearly doubled their share of America’s electricity mix. Innovations in battery technology, too, seem poised to accelerate the global energy shift.

Here too, was America once hawkish and ahead of the curve. When the Space Race of the 1950s ushered in an era of frenzied innovation, American investment in solar photovoltaics helped commercialize the once-nascent technology. For the next three decades, the United States dominated the global solar industry, leading development and controlling more than 90 percent of the market. The results of this effort are now evident to all: deemed “prohibitively expensive” only a decade ago, renewables are now often the cheapest form of energy, even without subsidies—and their costs continue to drop at a much faster rate than their fossil fuel competitors. In short, clean energy will become an invaluable resource in the next few years.

If renewables were recognized for even a fraction of their future potential, the United States would surely be rushing to become a world leader in clean energy capacity. But America’s commitment to renewables has exceptionally weakened in recent decades.

The Carter administration didn’t prioritize solar, and the Reagan administration rejected it entirely, crippling the industry with meager investment, record-high interest rates, and environmental deregulations. Over the next decade, America’s share of the global solar market plunged, and by the mid-2000s, American companies were producing a mere 9 percent of solar panels worldwide.

Now, the United States’ rivals have capitalized on the vacuum left by the lack of American leadership in the industry. China now dominates solar manufacturing, building three-quarters of the world’s photovoltaics. A whopping 80 percent of solar panels installed in the United States are from Chinese companies. America’s concessions to the Chinese Communist Party (CCP) are not limited to solar power, either: The United States has surrendered market share across the clean energy industry, oftentimes at a staggering pace. A little over a decade ago, the United States had twice as much wind capacity as China; today, that ratio is flipped. In 2013, the United States had five times as many electric vehicles as China; China now has double the American supply.

These developments have enormous geopolitical consequences, as the CCP well knows. Particularly when it comes to energy, economic competition does not exist within a vacuum, and countries often leverage their natural resources as a foreign policy tool. In 1973, OPEC famously placed an oil embargo on the United States for their support of the Israeli military, setting off a months-long energy crisis. In more recent times, Russia punished neighboring countries with fuel price hikes when they defied the wishes of the Kremlin. Energy security and independence are not abstract concerns; they have material consequences for American security and prosperity in both the short and the long term.

Now, with its failure to compete in the clean energy arms race, America has exposed itself to an energy security risk reminiscent of that of the 1970s. Already, China has explored limiting American access to rare earth minerals—often critical components of clean energy hardware—in response to U.S. arms sales to Taiwan, and continues to explore the ways in which it can impede American defense contractors by limiting mineral supplies.

This is a major problem given China’s near-monopoly on critical minerals. China’s production of lithium—the element of choice for electricity storage—is ten times that of America’s, and its reserves outpace the United States’ by a factor of thirty. Some estimates place the American lithium supply chain at already twenty to thirty years behind China’s. The story with other minerals is not all that different.

This isn’t because China has more naturally occurring mineral reserves, per se. Instead, the CCP is willing to go abroad for its resources—and it’s willing to mine, with a portfolio that now includes lithium in Chile, cesium in Canada, and cobalt in the Congo.

To compete, the United States will have to respond with its own mineral extraction operations; one can expect that after years of mainstream anti-mining rhetoric, this will be met with some resistance. But critical minerals, as their name suggests, are vitally important, and extraction will thus be a necessary evil if the United States wants to avoid running its clean energy industry (and with it, its environmental efforts) into a wall.

At the same time, America must reduce its broader reliance on Chinese energy with a more aggressive decarbonization campaign. This isn’t as simple as undercutting China’s wind and solar manufacturing costs (Chinese subsidies make that nearly impossible), but will instead require that the United States pursue innovative new renewable technologies. While this certainly means continued investment in research and development, it also means moving away from a national industrial policy that puts all the focus on technology, and none on application. If the United States wants to control alternative energy sources, it’s not enough to just invent—it must commercialize.

It’s not all bad, of course—in the first quarter of 2021, American lithium miners raised over $3 billion from Wall Street to support cleaner extraction alternatives. Some of the resulting initiatives, like California’s plan to extract lithium from the brine of the Salton Sea, are particularly promising. But these solutions are far from perfect, and the reality is that the United States, despite its vast resources, is currently incapable of going net-zero on emissions. To get there, it will need to pursue an all-encompassing approach—one that involves sustainable extraction, to be sure, as well as nuclear power, wind and solar, and next-generation technology.

China’s attempts to monopolize the clean energy industry have shown, in no uncertain terms, that renewable energy leadership is far more than a climate issue. Policymakers, national security experts, and environmentalists alike now face a reckoning: act soon, or fall yet further behind in a race that we cannot afford to lose.

Thomas Hochman (@thomashochman) is a Fellow at Citizen’s Climate Lobby. His work has been featured in Deseret News, The Washington Examiner, and a number of other outlets.