America is Making a Bad Bet on India 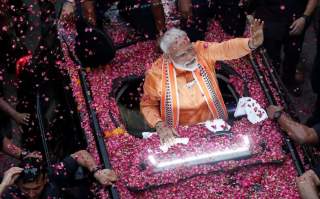 The cultivation of India as a strategic bulwark against a rising China has been a core feature of the Asia policy of successive U.S. administrations.

New Delhi, some believed, served as a natural counterweight to Beijing. Like China, it had a billion-plus population, a fast-growing economy, and a large military, but it was also regarded as a liberal democracy that respected religious and other basic freedoms. India was seen as not only matching China's key strengths but also sharing American values.

That image of India, on all fronts, was undeserved and is now unraveling. India today is not only on a path toward becoming an authoritarian, Hindu majoritarian state, but its economic engine is also sputtering, and its military will remain ill-equipped to balance China. Rather than serving as an ally or vital strategic partner, India may end up becoming a liability for the United States. As India chooses the path of diversification, or “multi-alignment,” in Asia, so too must the United States—especially in South Asia.

The Laundering of Modi’s Image

India’s rapid shift toward an overt Hindu majoritarian state was easily foreseeable, but many in Washington chose to ignore or obscure the obvious warning signs.

When the Hindu nationalist Bharatiya Janata Party (BJP) came to power in 2014, many advocates of the U.S.-India relationship argued that this was a kinder, gentler version of the party.

The then-incoming prime minister, Narendra Modi, had been a pariah figure for a decade after presiding over an anti-Muslim pogrom in 2002 as chief minister of the Gujarat state. But Modi’s sympathizers in Washington argued that he was a changed man—a Reaganesque figure who had since focused on economic development and reform. They pointed to Modi’s supposed pro-business policies and his inclusive 2014 campaign theme of “development for all.”

In reality, Modi never backtracked from his Hindu nationalist agenda in Gujarat, which he ruled from 2001 to 2014. Rather than apologize for the 2002 pogroms, which took the lives of over one thousand Muslims, he mocked the over a hundred thousand Muslims in displacement camps. Modi has targeted—and, indeed, continues to target—those who implicated him in the violence, including policemen and a human-rights lawyer, and rewarded figures who played an active role in the pogroms, including a Hindu woman accused of handing out swords used to massacre Muslims.

Modi also did nothing to heal the Hindu-Muslim divide in the state. Muslims in urban Gujarat remain largely confined to ghettos to this day. He insisted on implementing Hindu majoritarian policies in the state, including a law that required governmental approval for religious conversions—as part of an attempt to dissuade low-caste Hindus from embracing other faiths. Modi’s Gujarat government later tried to explicitly exempt conversions to Hinduism but was unsuccessful.

Modi has cynically appropriated the pacifist figure “Mahatma” Gandhi, but to project him as a distinctly Hindu icon—not as an advocate for amity between Hindus and Muslims. He has never wavered in his commitment to the ideology of the militant Rashtriya Swayamsevak Sangh, also known RSS, the parent group of the BJP, which aims to remake India into an official Hindu “rashtra” or nation.

Indeed, Modi has portrayed his own rise to power as marking the birth of a “New India” and the end of twelve hundred years of slavery—referring not only to the roughly two hundred years of British colonial rule but also centuries of “Muslim” rule and even seven decades of independence. His supporters hail the fall of the ancien régime—whose Anglophile or “Lutyen’s Den” secular elite is reviled for “appeasing” Muslims—at the hands of their “pure” Hindu strongman.

Now, in his second term as prime minister, with a commanding majority in the lower house of parliament and a feckless opposition, Modi is unsurprisingly going all-out to implement the RSS’s longstanding demands, revoking the nominal autonomy of the Muslim-majority region of Kashmir, stripping millions of Muslims of their citizenship, and coaxing a pliant Supreme Court to grant the entire site of a mosque destroyed by Hindu extremists to Hindu claimants. A nationwide ban on religious conversions and the abolishment of the separate Muslim personal law could come soon.

India is Nearing the Point of No Return

These measures have led to growing criticism of Modi in the U.S. media and even in the halls of Congress. But the Trump administration has doubled down on its partnership with Modi, even as he accelerates the dismantling of India’s secular edifice and positions his party for a long-term rule.

Not only has Alice Wells, the top U.S. official for South Asia, continued to emphasize the now-antiquated “shared values” narrative, she still deflects calls for U.S. action against New Delhi by arguing that democracies are “self-correcting”—even after India has imprisoned hundreds of politicians and thousands of civilians, killed dozens of protestors, and imposed communications bans across large swaths of the territory it controls.

The reality is that India’s democratic institutions are unable to reverse the country’s authoritarian Hindu majoritarian trajectory. Modi has neutered the judiciary and corporate media. Civil society protests have dented Modi’s aura of invincibility, but they are unlikely to have an impact on the national electoral map. The protests have been brutally crushed with impunity by Indian police forces working in tandem with Hindu sectarian militias. And the lead opposition party, the once-dominant Indian National Congress, is a shell of its former self, having peaked in the 1990s. The odds of dislodging the BJP from power in the next elections are presently low.

Instead of supporting India’s secular democrats and religious minorities, the Trump administration devotes its energy to deflecting pressure from Congress, chiding neighboring Pakistan, and even endorsing parts of India’s revisionist narrative on Kashmir.

America is dangerously emboldening India’s Hindu nationalist government as it nears the point of no return. Modi, whose term ends in 2024, could be succeeded by someone far more extreme. Top candidates include Amit Shah, Modi’s consigliere and bag man, and Yogi Adityanath, the rabid vigilante group founder and Hindu priest who rules India’s largest state. Both Shah and Adityanath are adept at inciting and orchestrating mass violence. And they are America’s potential future partners in India.

Regardless of who succeeds Modi, stoking anti-Muslim sentiment will remain key to the BJP’s electoral strategy. The BJP’s proven path to victory is to get the Hindu majority to vote on the basis of religion instead of caste, class, or region. And to do so, it needs a non-Hindu bogeyman to not just unite against, but fight.

Violence, or what political scientist Paul Brass calls India’s “ institutionalized riot systems,” is essential for the BJP to polarize the electorate along religious lines. The BJP’s grassroots machinery, including thugs, incite and engage in anti-Muslim violence, often colluding with local police and civil administration. The end result is a boost in the BJP’s electoral performance by upwards of 4.4 percent, according to one study. All politics is local. And in India, the BJP’s local politics is crude, bloody, and sectarian.

The BJP’s reliance on Islamophobia will only grow amid India’s economic downturn. The Indian economy is projected to grow this fiscal year at its slowest pace in over a decade. Unemployment is at a forty-five-year high. Much of this is due to Modi’s own disastrous economic policies, including his choice to suddenly take out 86 percent of the county’s currency out of circulation. The move, known as demonetization, was aimed at combating the illicit economy but hit India’s rural poor hard and has suppressed consumption since.

The demonetization program was designed by a quack economist. And herein lies the unspoken truth about the regime running India today. It is run not by India’s best and brightest, but by revisionist fanatics who cite ancient Hindu epics to claim that their civilization built flying vehicles and engaged in plastic surgery some millennia ago. The party that rules India today is a cabal of pseudo-intellectuals and ruffians with laughable views on history and science and a dangerous vision for the future. Rather than make India into a superpower, they will ensure that India’s demographic boom becomes a liability.

Indeed, India’s future is not as a great power but as a demographically enormous, middle-income country beset by social inequality and tumult. Its middle class, military power, and diplomatic stature will certainly grow—but not at a pace that is commensurate with that of neighboring China. India will continue to be outpaced by an already superior China on course to becoming an industrial and technology superpower.

Diminishing Ambitions for the U.S.-India Partnership

Now, as India’s structural challenges and pivot toward authoritarian majoritarianism become more obvious, advocates of the U.S.-India relationship are likely to move the goalposts, arguing that even despite India’s clear illiberal trajectory, the strategic logic of the relationship—containing China—is there.

Even on this front, expectations of India have tempered. Ashley Tellis and Robert Blackwill, two prominent advocates of a U.S.-India strategic partnership, now call for a more modest relationship. Still, they continue to argue that India should continue to enjoy American “strategic altruism,” because a stronger India will, invariably, be more capable of countering China.