America Must Ask More of Its NATO Allies 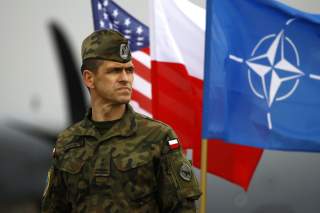 The president’s 2019 budget proposes a 30 percent increase—to $6.5 billion—for the European Deterrence Initiative, a program that pays for deployments of U.S. military units in Europe, exercises, and training events, and other initiatives designed to deter Russia and reassure allies. As part of the bargain with those allies, however, Washington is insisting that they show the same level of commitment.

Cajoling allies into more equitable burden-sharing—something every U.S. administration has attempted since the mid-1960s—or making America’s commitment to Article 5 conditional on allies paying their fair share—something unique to then-candidate Donald Trump in 2016—historically hasn’t worked well. Instead, the United States should focus on leveraging other aspects of its role within the alliance in order to get allies to spend more on defense, share burdens fairly, and maintain democratic norms at home.

Even though European allies have spent billions of Euros, deployed tens of thousands of troops, and suffered nearly nine hundred combat deaths supporting the U.S. war in Afghanistan, the Trump administration has focused single-mindedly on the issue of equitable burden-sharing. In truth, most European militaries are today under-resourced, under-manned, and ill-equipped for post–ISAF security challenges. Most NATO allies in Europe can and should spend more on defense and security.

Arguably as important, but apparently of less concern to the current administration given the burden-sharing mantra of top U.S. officials, is the rise of illiberal governance in Turkey, Poland and Hungary. Over the past few years the ruling parties of these U.S. treaty allies have each undermined democratic institutions, consolidated power and authority, and curbed the independence of nongovernmental organizations and civil society.

One way of incentivizing increased defense spending and/or a greater commitment to democracy and human rights would be to condition U.S. military deployments or other activities under the European Deterrence Initiative on allied behavior. The more an ally spends on defense, resurrects judicial independence, or promotes civil society, the more American military goodies it would receive in the form of troop deployments, exercises, and so forth.

Unfortunately, this approach smacks of the same Article 5 conditionality that presidential candidate Donald Trump pitched in 2016—“good” allies get the promise of U.S. boots on the ground and protection while “bad” allies get uncertainty. Among European allies, conditionality creates the very instability that the NATO treaty was designed to eliminate in the first place, ultimately undermining U.S. security and economic well-being. Meanwhile, U.S. conditionality toward European allies raises questions in Moscow about what Americans are willing to fight and die for, opens the door for Russia’s revisionist adventurism, and ultimately leads to strategic instability, none of which are in the interest of the United States.

Luckily, there are better options for achieving U.S. goals than through European allies. When it comes to defense spending, commonly held security threat perceptions—especially among policymakers and informed elites—are vital. This means continuing to break down barriers to intelligence-sharing with our allies, an especially difficult feat given the American propensity for over-classification.

Washington should also leverage allies’ desire for prestige, and the domestic political rewards that come with it. Political leaders everywhere relish being perceived as carrying weight in international circles, as having the respect of other leaders, and as being able to bring home the bacon when it comes to shared multinational resources.

For instance, the United States could work within NATO to permit only allies who are meeting spending targets or who are models of democratic governance to host alliance summit meetings. These meetings are expensive and challenging to organize and run, but they are often highly sought after by NATO’s members for the prestige and attention they bring.

Finally, all of the allies covet NATO-funded infrastructure. Construction of or upgrades to NATO-related facilities like headquarters, airfields and port facilities brings prestige as well as jobs. Washington should work through NATO to ensure the alliance situates new infrastructure and facilities in those member states that have good track records when it comes to meeting defense spending targets or promoting democracy and good governance at home. Similarly, upgrades to existing facilities ought to be tied to continued adherence to the same objectives.

Obviously, all of these steps would need to be carefully weighed against operational requirements for the defense of Europe. Nonetheless, they are practical carrots and sticks the United States can use to promote important allied objectives, without resorting to conditionality and undermining strategic stability.

Dr. John R. Deni is a research professor at the Strategic Studies Institute of the U.S. Army War College and an adjunct professor at the American University’s School of International Service. He’s the author most recently of NATO and Article 5. The views expressed are those of the author and do not necessarily reflect the official policies or positions of the U.S. Department of the Army, the U.S. Department of Defense, or the U.S. government.

Image: A Polish soldier stands near U.S. and Poland's national flags and a NATO flag as the first company-sized contingent of about 150 U.S. paratroopers from the U.S. Army's 173rd Infantry Brigade Combat Team based in Italy arrived to participate in training exercises with the Polish army in Swidwin, northern west Poland April 23, 2014. The United States is sending about 600 soldiers to Poland and the three Baltic states for infantry exercises, the Pentagon said, one of its highest-profile steps yet to reassure NATO allies after Russia's seizure of Crimea. REUTERS/Kacper Pempel ​