America Must Be Ready to Nuke Back Fast 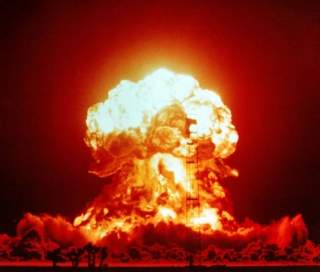 It’s time to recall September 26, 1983, what could have been the most consequential moment in history.

That day, Lt. Col. Stanislav Petrov was the duty officer at the Serpukhov-15 early-warning center, south of Moscow. During the first hours of the morning Petrov heard successive alarms indicating that five Minuteman missiles from Montana were headed toward the Soviet Union. More than thirty reliability checks in Serpukhov-15 confirmed the attack.

Petrov, however, ignored the warnings that missiles were approaching at three miles a second. “I was drenched in sweat,” he recalled. “People were shouting, the siren was blaring. But a feeling inside told me something was wrong.”

The Soviet officer did not think the U.S. would begin a conflict with such a small salvo, and as it turned out, he was right. Sensors aboard satellite Kosmos 1382 misinterpreted sunlight bouncing off the tops of clouds as incoming missiles.

His reward for saving humanity? Stanislav Petrov was disciplined for a technicality and soon left the military.

The only thing that prevented a nuclear exchange that day was what Petrov later called “a funny feeling in my gut.” The world was fortunate: it was not his turn to stand duty. Petrov took over the watch for a friend.

The Petrov incident is not the only time the world came close to accidental Armageddon. In January 1995, Boris Yeltsin received his nuclear launch codes and had to decide whether to fire off his missiles when America and Norway sent a rocket into space to study the Northern Lights. A mistake in Moscow resulted in a failure to forward the advance notice of the launch to the appropriate military command.

The Soviets were not the only ones to make potentially disastrous errors. Americans have confused migratory birds as incoming missiles, sent bombers halfway to the Soviet Union after false alarms, and during the Cuban missile crisis inadvertently ran a test tape of a Soviet nuclear attack on Tampa and then took the simulation as the real thing.

Nuclear weapons, as they say, are under the control of “imperfect humans inside imperfect organizations,” so things from time to time go wrong. “The systems are not failsafe,” Mark Fitzpatrick, head of the Americas office of the International Institute for Strategic Studies, tells The National Interest. “There have been too many cases of mistaken symbols.  We’ve just been damn lucky they didn’t result in retaliation by mistake.”

Fitzpatrick, a leading analyst, is certainly correct. Activists, therefore, are now urging the Obama administration to “de-alert” the nation’s nuclear arsenal. Instead of launching before enemy warheads have reached their targets, they say the U.S. should disable its missiles so they can be fired off only after the country has first absorbed a blow. “Being deliberate and precise in response to a nuclear attack takes time; adopting a nearly automatic, spasmodic, reactionary retaliatory response risks being neither,” Henry Sokolski, head of the Nonproliferation Policy Education Center, said to The National Interest.

General James Cartwright, who headed U.S. Strategic Command, said in 2012 (after he retired) that our weapons should be secured so that it would take 24 to 72 hours to launch them. Some want even longer waiting periods.

There’s no question that abandoning “launch on warning” would eliminate the most probable cause of accidental nuclear war. Because not every president or flag officer will be as intuitive and brave as Lt. Col. Petrov, why should the U.S. adhere to what many call dangerous doctrine?

Many respond by arguing that the risk of the U.S. accidentally starting a war is extraordinarily low, but probability of mistake is not the issue. In my view, the primary reason not to abandon the doctrine at this time is that launch on warning preserves, to the maximum extent, deterrence.

What deters? “Deterrence requires a combination of power, the will to use it, and the assessment of these by the potential aggressor,” notes Henry Kissinger’s oft-quoted formula. “Moreover, deterrence is the product of those factors and not the sum. If any one of them is zero, deterrence fails.”

Actually, there is only one factor that counts, the third one, what a potential aggressor thinks. If the aggressor thinks a retaliatory strike will be delayed, it might get the idea it can escape punishment.

When retaliation is not immediate, it may never occur. If missile and bomber forces were de-alerted for days or weeks, there would be time for political pressure to build to not launch. Many believe that massive retaliation is really mass murder and make the perfectly valid point that nothing will bring back the dead. The argument, elegant in its simplicity and logic, is that deterrence has already failed so there is no point in killing more people.

Not just Americans will participate in this conversation. Others will undoubtedly try to influence the decision whether or not to retaliate, especially the nation that launched the attack. Foreign manipulation of U.S. public opinion is not some theoretical concern. After all, this year, Americans have been the target of an unprecedented effort by one country—Russia—to influence their political process. China, for its part, devotes considerable effort and resources, year in and year out, to shaping the views of the American public and policymakers.

An aggressor might reasonably believe it could launch but convince Americans not to attack, thereby avoiding retaliation. The idea that another nation might contemplate getting away with the first use of nukes sounds Strangelovian, but not everyone thinks about nuclear weapons the way Americans do.

American policymakers have long believed these “gizmos of mass destruction” are for deterrence only. Not so Vladimir Putin, who in August 2014 while in Crimea talked about “our new developments in offensive nuclear weapons.”

And then there are the Chinese. In August 2011, Xu Guangyu, a retired Chinese general working for the China Arms Control and Disarmament Association, indicated in blurted-out comments to the South China Morning Post that his country was planning “a surprise attack on the U.S.”

And Chinese flag officers, echoing infamous comments of Mao Zedong, have from time to time suggested they were willing to accept deaths in the hundreds of millions in a nuclear exchange with the United States. For instance, in July 2005 Major General Zhu Chenghu, in comments that threatened the first-use of nuclear weapons against America, said his country was prepared “for the destruction of all of the cities east of Xian.” Most of China’s population, and most of the country’s major cities, are east of that city.

Comments like this, at a minimum, tell us that in the post-Cold War world the concept of deterrence is evolving and perhaps breaking down. The Russians and Chinese appear to view nuclear weapons in different ways than Americans do, and this mismatch could be exceedingly dangerous. De-alerting, especially when missiles are disabled for days, decreases the possibility of retaliation and therefore leaves the door open for nuclear adventurism.

In one limited instance, it may be possible to take weapons off what critics call “hair triggers” and still deter adventurism. Before that can be done, however, the U.S. Air Force has to remove its highly vulnerable land-based missiles from silos and put them on railcars or, like the Chinese and Russians, on transporter-erector-launchers—trucks in common parlance. The U.S. is almost forced into a launch-on-warning posture because the Minuteman III, in fixed and known locations, will almost certainly be destroyed by the first wave of a nuclear attack. “Use them or lose them” is the calculus.

The Air Force is now seeking funds to replace the missiles, first deployed in 1970 with an expected ten-year lifetime, but the plan is to put the replacements into silos. The new missiles, however, should be mobile. As Sokolski says, “The proper modernization of the land-based leg should make launch on warning unnecessary.”

If the new missiles, the main part of the GBSD or Ground-Based Strategic Deterrent program, could be carried by truck or rail, the American arsenal could generally be safely de-alerted if doctrine called for only minutes—not days or weeks—between confirmation of detonations of enemy nukes and the launch of retaliatory strikes. Of course, any de-alerting, however short the timeframe between first attack and launch, would require even more detailed planning to assure the United States could respond following the decapitation of civilian and military leadership in a first strike against the homeland.

Critics like Cartwright and Global Zero co-founder Bruce Blair want to scrap land-based missiles altogether, but at a time of increasing nuclear threats that is not, as a practical matter, going to happen. The task now is to make the land leg of the “triad” survivable. Mobile missiles will cost far more than the now-projected $62 billion price tag for GBSD between now and Fiscal Year 2044, but if activists say de-alerting is critical, they should be willing to support additional budgetary burdens.

Today, nobody remembers September 26, 1983, and for that we have Lt. Col. Petrov to thank. Yet at this moment the primary nuclear risk is not accidental launch but failure of deterrence, and so the U.S. must leave each potential attacker in no doubt it will be obliterated soon after launching against the American homeland.