America Must Do More Against Ethnic Cleansing in Myanmar 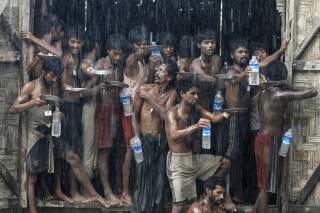 Eighteen-year-old Nuri Mohammed witnessed something horrendous last year—the murder of his parents and ten other family members at the hands of the Myanmar military. When his mother saw the soldiers enter the village, she told him, “My son, go, flee this country.” It’s likely the only reason he’s alive.

Today, Nuri lives in the overcrowded refugee camps on the outskirts of Cox’s Bazar, Bangladesh. It is home to hundreds of thousands of Rohingya who were forced to flee their homes in Burma, also known as Myanmar, during the military’s ethnic cleansing campaign. He doesn’t know if or when he will be able to return home. When asked what the international community can do to help him, Nuri is clear: “Help me get justice for my family.”

The United Nations General Assembly (UNGA) begins next week and is a critical opportunity for the U.S. to galvanize international support for the plight of the Rohingya. Last month, the UN Human Rights Council released the report of the Independent International Fact-Finding mission on Myanmar and found that senior Burmese military officials should be tried for crimes under international law. The incontrovertible evidence presented by the Fact-Finding mission demands a robust response, one that should begin during UNGA.

Reports and legal determinations will mean little for people such as Nuri if there isn’t effective action to bring those responsible for these appalling crimes to account.

The next step involves crafting a comprehensive American and international response to the Rohingya people’s immense suffering. A recent Heritage Foundation report calls on the U.S. government to respond urgently to the Rohingya crisis while also using this historic moment to review and reset broader U.S. policy toward Burma. This involves sanctioning the upper echelons of the Myanmar military, including the Commander-in-Chief, Senior General Min Aung Hlaing.

Moreover, a recent Amnesty International report identified thirteen individuals who should be investigated for their role in crimes against humanity. While heralding from different institutions, both of us authors agree that since responsibility extends to the highest levels of the chain of command so, too, should justice and accountability.

On August 17, the U.S. administration sanctioned four Burmese military and Border Guard Police commanders, as well as the 33rd and 99th Light Infantry Divisions of the Burmese military for the role they played in ethnic cleansing in Rakhine State and abuses in Shan and Kachin states. In announcing these designations, Undersecretary Mandelker said they were “part of a broader U.S. government strategy to hold accountable those responsible for such wide-scale human suffering.”

These sanctions built upon previous designations when the United States was the first country to impose targeted sanctions on a senior military official for the crimes against the Rohingya –listing Major General Maung Maung Soe, the-then head of Western Command. The Myanmar government attacked the decision, claiming that the “targeted sanction is based on unreliable accusations without evidence.” That was absurd at the time, given all the public reporting, but now the State Department should further disabuse the Myanmar authorities of that notion.

This can be a watershed moment for the United States. But sanctions alone do not a policy make.

America should use this opportunity to address the plight of all religious and ethnic minorities in Myanmar, including in Kachin and Shan States, where civilians continue to bear the brunt of brutal armed conflicts. For far too long, the military has operated with impunity, with devastating results. Justice is an essential part of how these violations will end.

To get there, the administration should trigger more assertive action on Burma at the United Nations Security Council, including by pursuing justice for senior officials responsible for crimes against humanity. At the U.N. Security Council, Ambassador Haley previewed a much-anticipated State Department report, saying it represents an “official accounting of what these refugees witnessed… The results are consistent with the recently-released UN Independent International Fact-Finding Mission on Burma…[and] Until then, none of us… has the excuse of ignorance.” The State Department should publicly release its report on the Rohingya and make a legal determination to build additional international support. We have seen before that international pressure can and does work.

What’s critical right now is to collect and preserve evidence in a way that can be used in future criminal trials. Every day that passes, vital evidence risks disappearing or being destroyed.

Next month, the UN will hold several critical sessions on Myanmar. The United States should lead the growing effort to establish an independent investigative mechanism specifically mandated to preserve evidence and build criminal cases that can be used for prosecutions.

Justice also means addressing the systems of abuse in Burma. The United States needs to push for reforms such as civilian control of the military. It must urge the Myanmar government to combat segregation and discrimination, including in the right to citizenship, which has been stripped from and denied to the Rohingya. The Myanmar government also needs to support freedom of expression and the right to a free press which were integral to investigating to the Rohingya crisis.

Without ending the systemic persecution of the Rohingya, there can be no safe, dignified, and voluntary repatriation. Without internal reform in Myanmar, the military’s crimes are doomed to repeat.

This administration has the opportunity and responsibility to ensure that those responsible for crimes against the Rohingya are held to account. Accountability is essential for hundreds of thousands of people such as Nuri to be able to return to their homes in Burma and begin rebuilding their lives. There is no question of whether America must act—only if it will choose to do so.

Olivia Enos is a Policy Analyst in The Heritage Foundation’s Asian Studies Center.