America Must Have a Grander Strategy for China 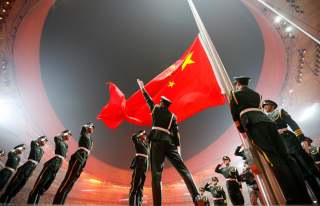 Many circulating and competing proposals for America’s new grand strategy not only focus on China but also start with a ‘c’ such as ‘Competitive Co-existence.’ But what else starts with a C? Capitulation, Concession, and Chamberlain. What is lacking is a simple, bumper-sticker grand strategy catchword akin to America’s twentieth-century grand strategy, containment. The answer starts with an “E” for Envelopment.

It is a strategically dynamic time in American grand strategy. As of yet, there is no twenty-first-century description or “hashtag” to describe our evolving relationship with the People’s Republic of China (PRC) that fits the equivalence or Cold War-era gravitas of Containment. At this critical juncture, pundits, academics, and policymakers are all vying to coin the next American grand strategy to deal with a rising PRC. The lack of a discernable grand strategy even seems to have stirred debate amongst generations of U.S.-China experts. Now is the moment for an alternate grand strategy proposal. It starts with an ‘e’ for Envelopment.

Envelopment is a reassertion of America’s place in the global order and rests on three tenets: it is value-based, it requires a whole-of-society response that leverages the entire spectrum of national power and influence, and it can be replicated by America’s partners, allies, and like-minded nations.

Besides, “envelopment” stands in stark contrast to other strategy proposals that usually start with “c.” Titles and ideas like “Competitive Co-Existence,” “Cooperation Spirals,” “Constrainment,” “Containment 2.0,” or nostalgia for a second Cold War. Even a senior colonel in the People’s Liberation Army (PLA) said in a New York Times op-ed that he concurs with a new Sino-U.S. “Competitive Coexistence.” In the last few days, Graham Allison has entered the strategic fray by raising the specter of a return to a “spheres-of-influence” as a possible solution.

Either way, it is not that these various strategy proposals are not well-intentioned and thoughtful attempts to solve an intractable problem. Nor do they lessen the contribution to the ongoing American national security dialogue on our nation’s next grand strategy. It is worthwhile to acknowledge and adjust to the PRC’s rise within the global order—but to what extent? Indeed, eight American presidencies rode various models of “responsible stakeholder” and engagement with the PRC aiming towards two goals: that the PRC would become more liberal and would share long-term, American and global interests. All the while, the PRC executed a Deng Xiaoping style strategy of “hide and bide” in order to steadily accumulate more economic, diplomatic, and military influence and power.

The mere fact that American strategists are debating and considering a new grand strategy leads one to believe that those past American policies now have failed to assuage concerns vis-à-vis a rising PRC. Great Power Competition would appear to be a possible grand strategy candidate. However, it is too constrained by its emphasis on the PRC and Russia to the neglect of the compendium of other adversaries and challenges such as Iran and North Korea. This reinforces the critique that any policy or strategy that specifically focuses on China does so at the neglect of other global challenges. But at the same time, the PRC should be the primary focus of any future strategy. This conundrum raises concerns about the mixed signals the current deluge of strategies presents.

The dearth of a coherent American grand strategy along with the plethora of strategies that start with “c” is concerning for many reasons. First, these concepts are myopically focused solely on China. There is no doubt China is the priority per the Trump administration’s 2017 National Security Strategy and the 2018 National Defense Strategy. From the deep seabed to the stars, PRC capabilities and capacities are challenging American interests with repercussions across the global community. However, any new American grand strategy could and should include Russia, North Korea, Iran, and violent extremists. Indeed, these are already woven into the Trump administration’s strategies.

Second, these c-strategies sound awfully similar to other c-words like capitulate, concede, concession, cowardice, and Chamberlain. American strategists need to take a collective pause with c-naming strategic conventions like or that automatically prioritize the other “c” catchword—collaboration. Besides, these “c” grand strategy jingles sound almost indiscernible from pleasant-sounding platitudes and wordplays the Chinese Communist Party (CCP) promulgates like “Win-Win Cooperation,” “Community of Shared Human Destiny,” or “Socialism with Chinese Characteristics.” In addition to those “Cs,” Xi Jinping hit multiple “Cs” with the PRC’s foreign policy goal to pursue “friendship and cooperation with all other countries on the basis of the Five Principles of Peaceful Coexistence.” The duality of “Competitive Coexistence” seems to be a nod to a major Asian cultural icon—the yin-and-yang. If that is its premise, then it would appear that this and other strategic proposals very well may be “sleepwalking” into a Sino-centric agreement and alignment with the PRC. But coming back to the “Competitive Coexistence,” the name raises additional critical questions. How long would America, or China for that matter, “competitively coexist?” Till either one no longer does? Is one coexisting or competing more than the other? It isn’t entirely clear. Rather, what is needed is a bold plan with an ambitious name, not a strategic CCP homonym soundbite. Consider that the CCP doesn’t shy away from naming its national roll-out and concepts for dominion like “Made in China 2025” or “China Dream.” America strategists would be advised to do the same.

Finally, scarce American resources and bandwidth require a more holistic, global strategy with a policy and approach beyond just the PRC. Even if relations improve with the PRC such that any grand strategy is no longer required, the challenges from Russia, Iran, North Korea, and countering-violent extremism remain. Envelopment could just as easily be employed for these as well.

At this point, it is just as vital to present a clear and concise plan for implementing any future grand strategy. It has to be communicated not only to the members of the United Nations but to the citizens of the American nation. Consider this, how does a national security analyst describe “Cooperative Coexistence” to a farmer in Iowa? How would that analyst describe it to a farmer whose sorghum crop was targeted by the PRC in the last few rounds of the Trade War? How far does a “Cooperation Spiral” go on Wall Street to a trader that has bought a financial instrument from a Shanghai broker under opaque Chinese regulatory rules or illicit state-owned-enterprise insider trading information? Does “Containment 2.0” satisfy a Silicon Valley start-up that had its proprietary information vacuumed up through state-sponsored espionage?

On the contrary, America’s most formative and bold strategies, concepts, and policies have been robust, assertive, and creative from the Monroe Doctrine to the Truman Doctrine. America’s national security establishment has pioneered novel and innovative institutions and strategies from the League of Nations to Containment. Envelopment follows this rich history.

Envelopment grand strategy is based primarily on Merriam-Webster’s definition of “envelop” to that of “enclosing or enfolding completely with or as if with a covering.” Envelopment is the strategic action of effectively “covering” down on these three, core tenets.

First, the primacy of values. Envelopment encompasses these values: a degree of freedom of expression and liberty; enhanced property rights; the rule of law; a market-based economic approach; and more accountable, transparent, and egalitarian governance based on democratic principles. These follow and expand upon Senator Sasses’s recent principles or value-focused approach proposed in The Atlantic.

For those steeped in diplomacy and security, the reprise of values builds upon Paul Nitze’s 1950 National Security Council Paper NSC 68 that “our determination to maintain the essential elements of individual freedom . . . our determination to create conditions under which our free and democratic system can live and prosper; and our determination to fight if necessary to defend our way of life.” But values have become upset in recent years by the massive transfer and proliferation of wealth, productivity, resources, and technical know-how that the post–Cold War era and globalization has unleashed. Yet, it needs to be made clear that Envelopment is not meant to impose an American doppelganger regime. In the neighborhood of China, East Asia is full of countries that incorporate various degrees of this value-based regime from Singapore to South Korea to Japan.

Second, Envelopment is a whole-of-society approach and pulls all levers of national power and influence. It is not solely a whole-of-government or whole-of-Department of Defense approach. When FBI Director Christopher Wray testified in 2018 on the topic of campus espionage perpetrated by PRC nationals, he described China’s concerted effort as a “whole of society threat.” This analogy to campus espionage is illustrative and useful to appreciate the approach that must be made in this new grand strategy. Furthermore, it is not siloed into traditional security reference frames such as Diplomatic, Information, Military and Economic or DIME. There are social, cultural, legal, and policy elements that should be considered as well. The strategy leverages the entire spectrum of national power and influence. It can be employed in projections of both hard and soft power for Great Power Competition against Russia and China as well as the challenges posed by Iran, North Korea, and countering violent extremism.