America Must Learn to Deal with Moral Outrage 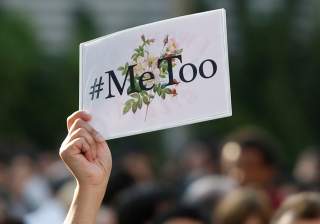 Much has been made out of the fact that the recent elections turned Virginia, once a solidly red state, into a fully blue one. Much more should be made out of the fact that Governor Ralph Northam, the leading Democrat in the state, did not hurt the ticket, despite his refusal to resign after a blackface scandal. Nine months ago, not only Republicans but also Democrats, at all levels of representation, called for his removal. The recent elections thus serve to illustrate what is necessary to ensure that the moral outrage of the Me Too and Black Lives Matter movements will not turn into moral zealotry. For this pitfall to be avoided, two developments must take place: Americans must draw a line between minor and major moral “sins” and then provide a pathway for redemption.

The claims made by both moral movements are very compelling and that reforms they call for are highly justified. Moreover, these movements ought to continue to lead to changes in norms, mores, incentives, and laws. It is out of concern for these moral drives Americans must pay mind to the risks all such movements face, namely that they undermine the good they can do by treating all moral transgressions more or less equally.

Recently, it often seemed that—whatever the extent and level of violation of a moral norm—the outcry has been for the maximum penalty, for banishment. CEOs of major corporations, presidents of universities, and elected officials were all expected to resign and spend the rest of their lives in condemned isolation, without any opportunity for redemption. Rape, human trafficking, and sexual harassment have been all too often lumped together. Racial discrimination in hiring, gaining credit, and housing are frequently treated in the same way as uttering the n-word.

An early but example was the treatment of Gary Hart. He had an affair (with a consenting adult, who was not working for him) and above all was “charged” by the media for not being forward about it and teasing the press to find out about his affair (which he initially denied). His presidential drive was terminated forthwith. And ever since, all attempts to return to public life were in effect rebuffed because of events that took place in 1987—and were not major moral transgressions.

More recently, one is hard-put to find a more telling example than what was done to Senator Al Franken. His downfall started with an allegation that he forced kisses on a woman and later posed for a photograph in which she was asleep, and he grinned at the camera as he put his hands near her breasts. In the weeks that followed, seven other women reported that they too were kissed or touched inappropriately by Franken. Although he called for an independent investigation, he was hounded out of office before one could take place. Since then, seven of his former Senate colleagues have stated that they regret taking part in the calls for his resignation. Several commentators have noted that his punishment did not fit the crime, that it was disproportional. They have pointed out that there are other ways to deal with a moral offense than banishment, for instance stripping a Senator from preferred positions on various committees or passing a critical resolution by the full Senate.

Moral zealotry is leading preschool staffers to be careful not to hug a toddler who fell and bruised his knee, lest they are charged with sexual abuse. And Vice President Pence is not the only one who refuses to have a drink with a female co-worker. Moral outrage is a powerful instrument for social reform. However, it loses some of its sway, and helps engenders a backlash when the brush it employs is wielded indiscriminately. Obviously, a backlash also has other forces that drive it. However, when those who seek reform become zealots, they play into the hands of those who oppose changes that are vastly overdue.

There are ample “precedents” to draw on if one seeks to ensure that the punishment is proportional. Catholicism distinguishes between venial and mortal sins, with the former being less serious than the latter. Although there are no definitive lists of venial and mortal sins, the Catechism of the Catholic Church explains that a sin must meet three criteria to be classified as a mortal sin: the sin must deal with a sufficiently “grave matter,” the sin must be “committed with full knowledge,” and the sin must involve “deliberate consent.” Judaism requires minding 613 dos and don’ts, however, Jewish teaching indicates that only three of these are absolute, to the point where one must die rather than defy them. These three commandments prohibit murder, illicit sexual relations, and the worship of other gods. Secular, criminal codes also reflect differences in moral values, in that they punish much more harshly those who murder than those who steal and distinguish premeditated murder from involuntary manslaughter. The same goes for the different treatment of those convicted of aggravated versus simple assault.

Equally important, there ought to be a road to redemption for most—if not for all—who cross the line. A study of repentance found that, in many cultures and legal systems, there is a pathway that allows a person to show remorse, make amends, and pay their dues. Once this is done, they can then be reintegrated into society. It would also be ideal that offenders, whether the offense is legal or moral, must also show that they restructured their lives, and so have not offended again. In treating moral offenses, America needs something similar to the role probation plays in the legal system. That is, even if someone apologizes, makes amends, and is punished, they will still not be considered redeemed until a number of years (say, seven) have passed, during which time the person does not re-offend. Governor Ralph Northam of Virginia provides a telling example of how to deal with relatively low-level transgressions.

Northam’s scandal began with the publication of a page in his medical school yearbook that bore his name. The page features a 1984 photograph in which a person dressed in Ku Klux Klan robes stands next to a person in blackface. Northam expressed remorse for appearing in the photograph, calling the picture “clearly racist and offensive” and “disgusting.” And “it was my responsibility to recognize and prevent it from being published in the first place.” (The next day, he changed his mind, asserting that he was not in the photograph, but acknowledging that he had used blackface on another occasion). In short, he showed remorse. Next, Northam carried out painful conversations with black leaders and church groups. He may well have been driven by a desire to hold onto his office, but still, his conduct compares favorably to those who attack their accusers or blame the bottle or their mother for their failings.

Northam sought to make amends by using the months that followed to promote various measures of special interest to the community he offended. He created a commission to review textbooks to ensure that Black history is appropriately included and another to review state laws for racial discrimination. In June, he signed two bills aimed at reducing a racial gap in Virginia’s maternal mortality rate. In July, he signed an executive order providing more opportunities for Virginia’s women, minority and service-disabled veteran-owned small businesses. Still, for months, the governor was in the doghouse; he was lambasted by the press and elected officials, as many continued to call for his resignation.

Governor Northam’s record is particularly strong when one considers his rehabilitation. Others begin to show that they learned their lessons after they are caught (if they do restructure their lives at all). Northam, however, started more than thirty years ago—before he went into public life and well before he was caught. That is, as far as we know, he did not put on blackface in the decades that passed since his student days, and he showed no other signs of prejudice.

All said and done, it seems fair and square that Governor Northam was able to stay in office and that he is no longer considered a source of disgrace for the Democratic ticket he heads in his state. Others, who commit relatively minor moral offenses, will do well to follow in his footsteps. Furthermore, other communities should heed the way Virginians allowed his reintegration into the community.

Me Too and Black Lives Matter are powerful moral drives that confront moral failings that should have been tackled long ago, and their work is far from done. They will have more of the impact they seek if they follow the religious and legal tradition of drawing a line between minor and major moral fallings and point to pathways to moral rehabilitation, to redemption.

Amitai Etzioni is a University Professor and professor of international affairs at The George Washington University. Click here to watch a recent, four-minute video of him called “Reclaiming Patriotism, Political and Social Life after Trump.” His latest book, Reclaiming Patriotism, was published by the University of Virginia Press in 2019 and is available for download without charge.