America Must Not Endorse Faulty Elections in the Congo 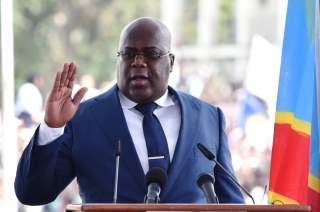 The U.S. State Department recently released—unilaterally and in defiance of the broader government’s policy-making process—a shocking statement lauding a “peaceful and democratic transfer of power” in the Democratic Republic of Congo. Mostly peaceful it may have been, but, alas, democratic it was not. All available evidence shows that the new president, Felix Tshisekedi, took power as the result of the same corrupt politics that has abased the Congo for decades.

The State Department’s congratulation of Tshisekedi undermines America’s ability to credibly advocate for democracy during a year filled with important elections in Africa and contradicts the simple known facts of what happened during the polls. The United States now faces the difficult task of trying to restore some of its lost credibility, which will require refusing to embrace Tshisekedi further and penalizing those responsible for the fraud.

Three primary candidates contested the December 30, 2018 poll: Tshisekedi, Martin Fayulu, leader of an opposition coalition, and Emmanuel Shadary, the hand-picked candidate of then-incumbent president Joseph Kabila, who for two years had connived his way to unconstitutionally extending his rule. Pre-election polling showed Fayulu with a commanding lead, so the electoral commission’s announcement of Tshisekedi as winner immediately raised eyebrows.

The Catholic Church, Congo’s most authoritative and legitimate institution, announced that data collected by its 40,000 election observers contradicted the electoral commission’s results. Two other independent analyses determined Tshisekedi’s win was a “huge fraud” and that the probability of winning his announced vote share was “less than 0.0000.”

Widespread rumors hold that Tshisekedi and Kabila cut a deal giving Tshisekedi the presidency while Kabila maintains control of key ministries. Kabila had to bargain with Tshisekedi as Shadary was so far behind that rigging the election for him would have been difficult even for the electoral commission’s nimble vote-counting fingers and would have left Shadary without a shred of legitimacy. Tshisekedi is also likely to go easier on investigating Kabila’s many misdeeds than the strict Fayulu.

What makes the State Department’s certification of a tainted election so bewildering is how unnecessary it was. The United States has no critical interests in the Congo that requires a friendly working relationship with the government. State Department may have thoughts its certification would support stability in a volatile country or believed that anyone was better than the kleptocratic and brutal Kabila. Yet even if those propositions are true, they did not require endorsing a phony election. A neutral statement, or none at all, would have sufficed.

And there is a good reason to worry the State Department’s logic will not hold up. Fayulu supporters may not remain forever quiescent over what they see as the theft of the presidency. And if the rumored Tshisekedi-Kabila deal exists, Kabila will still control key portfolios such as the security ministry. It is unlikely he will deliver peace where he previously failed, or for such a divided government to work with the singular purpose necessary to stabilize the Congo. Tshisekedi may also try to wrest full control of the government from Kabila, sparking a dangerous brawl for power.

Finally, Tshisekedi will likely struggle to be an effective leader coming into office under a cloud of suspicion. His lack of legitimacy—particularly after the Catholic Church questioned the results—will hurt his ability to effectively manage the country, including its many armed conflicts.

Tshisekedi may prove to be a scant improvement over Kabila in other ways as well. If he joined in a backroom deal with Kabila, it reveals a Kabila-esque willingness to grasp power at the expense of the rule of law, and a contempt for the will of the Congolese. He cannot be a unifying leader under such circumstances and will have to buttress his rule through patronage, tribalism, and the other dark arts illegitimate rulers use to keep power.

Legitimate institutions and processes underpin and protect true democracies. Any leader, even an ostensibly better one, who ascends by damaging those safeguards makes it less likely democracy will ever take root.

The current need for the United States to support democratic principles in Africa is urgent. Twelve African presidential elections are scheduled this year, many in important countries whose races are already fraught with tension. The State Department’s blessing of Congo’s election hampers America’s ability to credibly push for clean votes in those countries. Other African leaders may also now be further emboldened to use the same sort of imaginative ballot counting that enabled Tshisekedi’s win.

Washington must demonstrate that stealing elections will cost American friendship. The United States should sanction those directly involved in the fraud, and the State Department should cease its embrace of Tshisekedi. The U.S. government’s challenge of regaining some of its lost credibility starts now, and it must bend urgently to the task.

Joshua Meservey is a Senior Policy Analyst specializing in Africa and the Middle East at The Heritage Foundation.