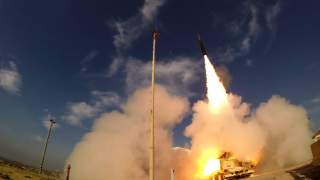 Over the last 15 years, the Department of Defense spent more than $24 billion to procure a mix of surface-to-air interceptors that lacks the capacity to defeat large salvos of ballistic missiles, cruise missiles, and other guided weapons that America’s adversaries are now capable of launching. As a result, enemy precision strikes in future conflicts could overwhelm the U.S. military’s air and missile defenses. In peacetime, an inadequate air and missile defense architecture will reduce the credibility of American assurances to its allies and its ability to deter aggressors.

This inadequacy developed partly because the U.S. military has never fought an enemy that was armed with conventional weapons capable of precisely striking distant targets. Today, however, China, Russia, Iran, and North Korea are fielding large numbers of increasingly accurate precision-guided munitions (PGMs) that threaten the U.S. military’s ability to project power.

Another factor behind DoD’s lack of missile defense capacity is its longstanding emphasis on preferentially using costly, long-range surface-to-air interceptors to defeat a small number of missile threats. The “layered” missile defense tactics favored by U.S. forces attempt to defeat incoming threats as far away as possible from their targets by using large and expensive long-range surface-to-air interceptors, then medium-range interceptors, and finally short-range defenses as a last resort. This approach is more appropriate for defeating a small number of ballistic and cruise missiles, some of which may carry nuclear warheads. Against large PGM salvos, however, it could result in situations where the U.S. military’s defenses are quickly exhausted, leaving its theater bases and forces vulnerable to subsequent strikes.

The good news is DoD could adopt operational concepts and field a mix of capabilities that could reduce the size of enemy strike salvos and greatly increase U.S. air and missile defensive capacity.

Reducing the size and lethality of an enemy’s PGM salvos is critical, since it can have the same effect as increasing the capacity of air and missile defenses protecting target areas. For instance, dispersing U.S. forces across multiple bases and frequently redeploying them between military, civilian, and expeditionary facilities would require an enemy to dilute its strike salvos across a larger number of targets. As a result, each individual U.S. operating location would have to defend against a smaller number of PGMs. U.S. forces could further reduce the size of PGM salvos by operating from bases and locations at sea that are outside the range of most of an enemy’s guided missiles and strike aircraft.  Using more distant, secure operating locations where feasible could also impose costs by inducing America’s enemies to invest in more expensive, longer-range surveillance and strike systems.

At the same time, the U.S. military could increase its air and missile defense capacity by focusing on defeating threats over medium ranges of 10 to 30 nautical miles (nm). The Navy now employs a layered defense approach that could cause ships such as destroyers to expend their entire $2 billion vertical launch system (VLS) magazines to defeat 50 missiles that cost an enemy about $2 million each.  The Navy could dramatically increase its at-sea air defense capacity using a defensive scheme that preferentially uses smaller, medium-range interceptors and new kinetic and non-kinetic defenses such as directed energy weapons. Four Evolved Sea Sparrow Missiles (ESSMs), for example, can be loaded in a VLS cell as opposed to a single SM-2 or SM-6 long-range interceptor. Medium-range interceptors such as ESSMs could be complemented by electronic warfare (EW) systems and directed energy defenses including solid-state lasers and high power microwave (HPM) weapons. Because these non-kinetic defenses have ranges that are limited by the horizon—10 to 30 nm depending on a threat’s altitude—they are now only used as a last resort after kinetic interceptors have failed. By shifting to a medium-range defensive scheme, EW and directed energy weapons could take the place of kinetic interceptors against some missiles. Similarly, a medium-range defensive scheme enables ships to use their guns instead of interceptors for air defense by firing guided hypervelocity projectiles (HVP) that have a range of 10–20 nm.

In contrast to ships, America’s overseas bases and ground forces have few if any defenses against PGM salvos. In particular, the small number of U.S. interceptors now deployed abroad will be insufficient to defeat large numbers of air-launched cruise missiles and PGMs. Similar to the Navy, the Army, Air Force, and Marine Corps could shift toward a medium-range air defense concept that also relies on using smaller interceptors and new kinetic and non-kinetic systems to increase the density of their air defenses. Moreover, placing greater reliance on directed energy weapons, HVPs, and EW systems that defeat threats for thousands and or potentially hundreds of dollars per shot could shift the cost exchange calculus in America’s favor.

DoD should accelerate the fielding of mature technologies to enable a medium-range air defense approach with increased capacity and lower costs. DoD is already pursuing medium-range interceptors to defend land and sea-based forces that are half the price of current longer-range weapons, such as repurposing the AIM-9X air-to-air missile for the Army’s Indirect Fire Protection Capability (IFPC), Increment 2 weapon or the Navy’s improvements to the short-range Rolling Airframe Missile (RAM) that would enable it to reach medium ranges. DoD is also developing HVPs and other guided projectiles such as DARPA’s MAD-FIRES weapon that could defeat PGMs for less than $100,000 per engagement—about 10 percent the cost of a typical long-range interceptor.

DoD could augment these kinetic weapons with non-kinetic electronic warfare and directed energy weapons that would help create deep magazines for its forces. Given adequate funding, within five years it could field solid-state lasers with sufficient power (150 kW to 500 kW) to counter unmanned aircraft and some cruise missiles, as well as broadband high power microwave systems that could defeat multiple threats in a salvo.

Service cultures are a key barrier to adopting operational concepts and procuring the capabilities suggested above. The Navy prefers to rely on multiple layers of defenses that could defeat missile threats multiple times before they reach its ships. This approach provides a false confidence, however. A layered missile defense that begins at long ranges (greater than 100 nm) could consume a ship’s VLS capacity very quickly against the first enemy salvo, leaving the ship with short-range, point defenses against subsequent salvos. Ashore, DoD’s land-based defenses could easily be depleted against a small opening strike of conventional ballistic missiles, enabling the enemy to conduct follow-on attacks nearly unimpeded.

Two additional factors could hinder the development of a salvo defense architecture.

First, responsibilities within DoD for preparing to defeat salvo attacks are not well demarcated. While the Missile Defense Agency’s mission is to create a ballistic missile defense system, it is not presently responsible for defining requirements and initiating programs to defeat cruise missiles. Guidance to the Services on who should prepare to defend America’s forward bases against PGM salvos is also ambiguous. Working with Congress, the Pentagon should clarify the responsibilities of MDA, the Services, and other DoD agencies to organize, train, and equip forces to defeat salvos that include cruise missiles and air-delivered PGMs.

Second, sufficient resources are needed to build a new generation of air and missile defense capabilities. Of the $524 billion requested by the FY2017 President’s Budget for DoD, less than $3 billion was allocated to procure missile interceptors of all types. Continued funding at this level may prove insufficient to develop effective defenses against salvos of ballistic missiles, cruise missiles, and other guided weapons.

Over the last 30 years, the Pentagon developed an air and missile architecture designed to defeat a limited number of cruise and ballistic missiles. As a result, the U.S. military is inadequately prepared for operations against enemies that field large numbers of capable PGMs. DoD has the opportunity to redress this situation by adopting new operational concepts and rebalancing its mix of air and missile defense capabilities. This will require congressional support for some new programs and an allocation of resources commensurate with this growing threat. The alternative of adhering to traditional concepts and capabilities for air and missile defense could invite potential adversaries to continue or accelerate their guided weapons investments, further eroding America’s ability to project power.

Image via US Missile Defense Agency.