America Needs to Exercise Budgetary Restraint Before It's Too Late 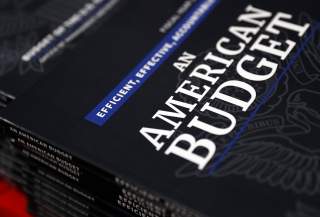 President Donald Trump released his fiscal year 2019 budget this week—and foreign-policy experts and prominent voices on Capitol Hill were quick to criticize the depth of his budget cuts.

For the most part, Trump’s request for the Department of State and other international programs, including both base discretionary funding and supplementary funding through overseas contingency operations (OCO), mirrored the request made in the fiscal year 2018 budget. The 2018 budget requested $40.2 billion for the Department of State. This was approximately 32 percent below the $59.1 enacted for fiscal year 2017. In comparison, the 2019 budget requested $40.3 billion, only slightly higher than the 2018 budget.

The reaction of Trump’s critics, however, was muted compared to last year when they asserted that the budget would destroy soft power, end foreign aid as we know it and endanger U.S. diplomats.

During the Trump presidency, reactions to administration proposals and policies has tended toward hyperbole, so the shift is a welcome embrace of perspective. After all, any president’s budget request is merely the first part of the budget process. In the end, Congress must authorize and appropriate funding and will assert its views accordingly.

To predict what will happen next, we need only look to last year. The House of Representatives passed appropriations for the International Affairs budget, which funds the State Department and other international programs, totaling $48.9 billion—$10.2 billion less than fiscal year 2017 and $8.4 billion more that the president’s request. The Senate passed a budget of $53 billion—$6.1 billion less than 2017 and $12.5 billion more than Trump’s request.

Thus far, fiscal year 2018 funding has been provided through successive continuing resolutions rather than normal appropriations bills. However, if normal process had been followed, the final appropriation would have been between the House and Senate levels—in other words, a reduction from 2017, but higher than the president’s request.

Looking forward, we can expect a similar process for fiscal year 2019, albeit one impacted by the higher budget levels following the enactment of the Bipartisan Budget Act of 2018.

This is not necessarily a bad thing. Heritage analysts have expressed concern that immediately implementing cuts to the State Department and USAID of the size proposed by the administration could be too disruptive.

But the notion that Congress should reject any cuts is simply not realistic. Although many policymakers prefer to ignore it, America cannot continue its current budgetary trajectory. The tax reforms will contribute to increased economic growth, but growth must be accompanied by budgetary restraint if our fiscal house is to be brought to order.

Cutting the budget for State won’t solve this problem—the real drivers are the rising costs of interest on the federal debt and entitlements such as Social Security, Medicare and Medicaid—but must be part of the solution.

With this in mind, the administration should urge Congress to adhere closely to the FY 2018 appropriations adopted by the House.

Congress should also seriously consider the reforms outlined in the president’s budget. Although details differ, bipartisan congressional interest in reforming the State Department, USAID and food aid has existed for years. The Trump administration has signaled that it is ready to press for reforms, and Congress should maintain or implement the positive policies and reforms outlined in the budget:

While Congress may not support elimination of the Development Assistance account, there is broad consensus that U.S. foreign-assistance programs are fragmented and overburdened by legislative directives and earmarks. Congress should work with the administration to enact reforms to address these problems.

The East-West Center and the Asia Foundation receive appropriated federal funding to support their activities, but do not operate under direct Executive Branch oversight. These organizations should be required to compete for federal funding like other nongovernmental organizations. It also calls for eliminating the African Development Foundation and the Inter-American Foundation and having USAID assume their mission to provide small grant assistance.

This is consistent with Trump’s decision to withdraw from the Paris Agreement on climate change. In addition, Congress should end funding for the UN Framework Convention on Climate Change. After the Palestinians acceded to the UNFCCC and became full members in the organization in 2016, the United States should prohibit contributions to the UNFCCC.

- Enforce the 25 Percent Cap on UN Peacekeeping Dues and Support the Effort to Review U.S. Membership in International Organizations

The Trump administration has repeatedly stated its desire to lower the amount that America pays for the United Nations peacekeeping budget to 25 percent in compliance with U.S. law enacted under President Bill Clinton in 1994. Last year, Congress decided to enforce that law for the first time in years. Enforcing the 25 percent cap is crucial to support U.S. efforts to renegotiate the UN dues structure this year to implement a maximum assessment of 25 percent.

Likewise, Congress should support the administration’s effort to “review multilateral contributions to evaluate how each organization to which the United States belongs advances American interests.” This will be invaluable in determining where U.S. taxpayer dollars get the best return.

- Shift OCO Funding to the Base Budget

Congress used OCO to circumvent government-wide limits on discretionary spending and provide additional funding to the Department of Defense and Department of State to conduct military operations and related activities in support of U.S. interests. Increasingly, however, OCO funding has expanded to encompass nonwar activities and the U.S. now has, in effect, two appropriations streams for State and Defense. The administration proposes to use the higher budget levels adopted under the Bipartisan Budget Act of 2018 to shift OCO funding into the base budget and phase out OCO funding for the Department of State and USAID. Phasing out OCO would be a welcome return to normal funding practice.

- Consolidate and Maximize the Impact of U.S. Food Assistance Programs

The administration proposes to eliminate P.L. 480 Title II food aid program in favor of the International Disaster Assistance (IDA) account that is not bound by requirements to buy U.S. food and ship it on U.S. vessels. This would increase the flexibility and efficiency of U.S. food aid and coincides with congressional interest to reform food assistance.

In addition, many members of Congress and the administration share an interest in creating a U.S. Development Finance Institution to “to better incentivize private sector investment in developing nations, counter America’s competitors, and provide better alternatives to State-directed initiatives.” It is an interesting idea, but Congress should note that the administration’s proposal is not to create a new institution out of whole cloth, but to create it by merging outdated, poorly focused agencies such as the Overseas Private Investment Corporation and multiple offices at USAID and other agencies to provide the rather modest resources requested. Elimination and consolidation of unnecessary agencies and offices is always desirable—which makes support for the Export-Import Bank in the budget all the more disappointing—but Congress should be wary of standing up new institutions that could share similar problems.

Members of Congress may disagree with funding levels in the president’s budget, but they shouldn’t disregard it. They should enthusiastically engage with an administration willing to move forward on long overdue reforms and prioritize spending as a means to more effectively advance U.S. interests.