America Needs to Give Europe Some Tough Love 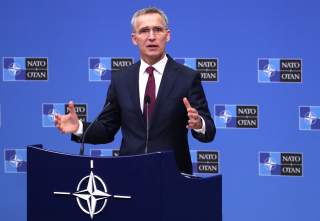 There is nothing wrong with the transatlantic community that a little tough love cannot solve. The biggest threat to that community’s future won’t come from the Russians, the Middle East, or even Brussels. It’s places like Berlin and Paris that are the real problem.

Unless these capitals start exercising sensible leadership, they only enable Vladimir Putin’s scheme to dismantle the transatlantic community, undermining the cohesion and future prosperity of the continent. Here is a plan for 2020 and beyond to fix this mess.

America Alone is No Option

The United States is a global power with global interests and responsibilities. Looking after America requires a global perspective. The three crucial pieces that link America to the world are Europe, the Middle East and Indo-Pacific. Preserving regional stability and the freedom of the commons (air, sea, space, cyber) that link America to the world is a vital interest.

China, Russia and Iran represent more than military, security and diplomatic dangers. All engage in “new imperialism,” seeking malevolent control over other nations. Tehran does this by enlisting surrogates (like Hezbollah, the Houthis and Shia militia) to do their bidding. Beijing and Moscow use corrosive economic practices, disinformation and other active measures. In each case, the United States must be present and engaged to combat malicious threats to regional stability and freedom of the commons.

In terms of U.S. vital interests, the peace, stability and expanding prosperity in Europe are every bit as important as the Middle East and the Indo-Pacific. The most significant external threats are Russia and destabilizing influences from the Middle East (terrorism, refuges, and conflict) spilling over into Europe. The encroaching influence of China is also a concern.

All these challenges were recognized in the administration’s national security strategy. A candid assessment that focuses on the actual policies put in place would conclude that the administration has largely followed through, pushing back on all of them. America continues to: support European energy security; lead in sanctioning Russia; support threatened states like Georgia and Ukraine; invest in the North Atlantic Treaty Organization (NATO) and advocate for its enlargement. The U.S. administration has also called out Russian cheating and withdrawn from the Intermediate-Range Nuclear Forces (INF) treaty. Moreover, Washington has upped engagement in the Baltic and Balkans states that had heightened concerns over destabilizing Russian meddling.

Donald Trump addressed other dangers as well. The United States helped eliminate the terrorist caliphate (the precipitating cause for millions of refugees to flee to Europe) and led in containing the expansion of Iranian influence.

America has also been more active in alerting Europeans to the dangers of Chinese influence. Washington, for example, recently raised concerns about continuing to share intelligence with countries that adopt telecom infrastructure built by the state-controlled Chinese tech giant Huawei.

For practical purposes, the U.S. abandonment of Europe accompanying Obama’s pivot to Asia has ended. The question now is: What next?

The most persistent problem is Putin. He isn’t going anywhere. The Russian economy isn’t going to collapse anytime soon. The Russian military isn’t going to stop its build-up. There are no signs that Moscow looks to change its strategy—constantly looking for gaps and opportunities to expand its influence and sphere of control, with the top priority being Russia’s near abroad.

With the U.S. presidential elections on the horizon, there is no shortage of advice now being offered on how to deal with Russia after 2020. Much of that advice is wrongheaded, based on the premise that what the United States is doing is not working and that Washington should do something different or, even worse, start over with yet another Russian reset. The faulty premise with all these plans is thinking they would serve any better to influence Russia than current policy.

To get a different outcome with Russia would require a different Russia, that’s not likely to happen anytime soon. We have to deal with the Putin we have, not the Moscow we want. We are not going to change Russia from the inside out, let alone from the outside in.

Trump was right to offer Putin an “off-ramp” to transatlantic competition. Indeed, virtually every European leader would love to see that happen. Maybe it makes sense to always keep that door open. It is folly, however, to think Putin is going to walk through any time soon.

That said, the biggest mistake in crafting the next steps in Russia strategy is thinking it is all about Russia. What it is really about is what we do with our friends.

Putin’s greatest successes right now are not scratching away at the frontier of NATO. If anything, that’s where NATO’s spine is the stiffest. Where Putin’s corrosive influence is most effective is in the capitals of Europe where he can sow discord by exploiting virulent anti-Trumpism, European populism, immigration, economic stagnation and other tensions within the European community. When European leaders publically attack each other, rebuke Trump, and fantasize about European strategic autonomy, they are doing Putin’s work for him.

There is no easy answer as to why any European leader would be Putin’s willing executioner of Europe’s future. Some are indifferent to the physical danger Putin poses to their European neighbors. Some are seduced by money, susceptible to pressure groups secretly funded or manipulated by the Russians, terrified of Trump or consumed by their own national politics. It doesn’t matter. The result is the same: a weaker Europe.

Here is Europe’s security dilemma in a nutshell. Europe doesn’t have the capacity to deal with the real external threats to European security alone. Europe’s only guarantee of security is as part of the transatlantic community.

Here is the U.S. dilemma. America needs Europe, but even if it tried really hard the United States couldn’t placate all the inter-European squabbling. It’s not a matter of Trumpian rhetoric. Trump could start acting like Obama tomorrow, but the underlying rot eating at Europe would still be there. The Europeans would just find another excuse to blame others for their lack of real transatlantic leadership.

America has no choice but to continue to lead and resign itself to the reality that everybody isn’t going to be happy.

Step 1: Keep the Pedal to the Metal

Don’t shift U.S. strategy towards Russia—at all. Don’t offer a single conciliatory gesture. Don’t go wobbly on NATO enlargement, European energy security, or sanctions. Forward deploy U.S. forces in Poland. Support Ukraine, Georgia and Moldova—nations with territory occupied by Russia. On the strategic front, keep the momentum started by the INF pull-out rolling. Step up engagement in the Balkans. All of this is vital, not just to show Putin that America is on watch, but to show Europeans we will walk the walk when it comes to being tough on Putin.

Step 2: Double Down on the Special Relationship

The UK has always been the American anchor into the transatlantic community. That link is more important than ever. If it can succeed in slipping from the noose of the European Union, London could well become the new economic powerhouse of Europe. God knows Europe needs a jumpstart in economic growth.

According to the Department for International Trade, U.S. foreign direct investment (FDI) into the United Kingdom has already soared, jumping by 19.5 percent in 2017 alone. British FDI into the United States rose 8.4 percent during the same period. Total U.S.-UK trade in 2017 amounted to $235.9 billion. Britain will thrive and prosper in the Brexit era, and America poised to do a trade deal with the UK. Having an independent security voice in Europe will likely help as well. It is expected, for example, that a Britain out of the EU will be tougher on both Russia and Iran.

NATO is the cornerstone of the transatlantic political-security alliance, but the best way to sustain a strong base is from the bottom up. The foundation of transatlantic security underlies the bilateral alliances and partnerships that starts with Iceland in the mid-Atlantic and runs from the UK across the Western frontier from the Baltic Sea to the Adriatic. Essential efforts include bilateral military planning, exercises, deployment and forward basing, energy cooperation and promoting foreign direct investment.

Step 4: Keep the Middle East from Melting Down

Europe can deal with Putin and China if it isn’t distracted by grave threats from down below. U.S. regional strategies for Europe and the Middle East must be interlocked. U.S. contributions toward a more stable prosperous and peaceful Middle East have a direct, salutary impact on European security. America already does a lot, and it can do more. The Europeans can help. Libya is a prime example.

A stable Libya would be a boon to regional security and expand energy resources available on the world market. The Europeans are squabbling over Libya policy. A little more diplomatic leadership from America would benefit both sides of the Atlantic.