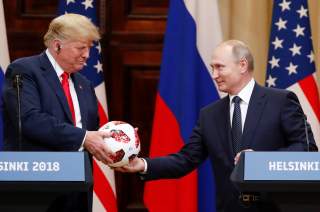 It’s time for the hysteria over Russia to stop. It is adding to the divisions already plaguing the United States and, if not repaired, these divisions will do far more harm to America than any external aggression from Russia, China, North Korea, or Iran.

This is not, however, to suggest President Donald Trump deserves a pass for his politically dismal performance at the Helsinki press conference. It is to suggest, however, that the nature and severity of the accusations are neither appropriate nor accurate, and that the summit may yet result in a net-positive for the United States.

Former CIA Director John Brennan outright called Trump’s performance at the press conference as “nothing short of treasonous.” Sen. Richard Blumenthal went so far as to warn that it was an event comparable to the attacks on 9/11. It is perfectly fair game for political parties to find fault with their counterparts and to voice, even with passion, their complaints. But there has to be a limit on how far the vitriol goes, especially when the evidence doesn’t support the claims.

Treason is a very serious charge, and the term should not be bandied about lightly. U.S. law formally says that any person “owing allegiance to the United States, levies war against them or adheres to their enemies, giving them aid and comfort within the United States or elsewhere, is guilty of treason.” Furthermore, nearly three thousand Americans were killed on 9/11 and two wars were spawned as a direct result (one of which, in Afghanistan, continues to this day).

Does Trump’s performance at a press conference rise to either of these standards? Let’s look at what actually happened in Helsinki and the actions that have—and have not—been taken since.

First, however, it is necessary to point out Trump made some egregious political mistakes at the press conference and did himself, his party, and the country no favors. The purpose of the meeting was to establish lines of communication between Trump and Putin so areas of contention could be addressed and items of mutual interest improved.

As such, the post-meeting press conference should have been a perfunctory exchange of each president agreeing to work cooperatively for the benefit of each nation. It was also not a forum for either party to attack or insult the other as contentious issues could and should have been firmly discussed in private.

Diplomatic protocol made it reasonable that neither Trump nor Putin publicly reproach the other for real or perceived offenses. It would have been reasonable for Trump to acknowledge that these thorny issues were addressed in their private discussions, that he made clear how America views these matters, and he will continue discussing them.

What protocol and reason didn’t call for, however, was Trump essentially defending the Russian president at the expense of U.S. intelligence officials. Bringing up the Mueller investigation, making accusations against the Democratic party regarding the Hillary Clinton email servers, and blaming poor relations between the two nations on America, were classic unforced errors. They may be valid issues, but wholly inappropriate to bring up on a stage standing next to Putin. Instead, he should have saved those matters for U.S. audiences.

But when considering whether Trump’s performance rose to the level of treason or a catastrophic terror attack against the United States, it is necessary to examine the context and content of both what he did say and what he didn’t do. Concerning optics and who “won” the press conference, there is little doubt it was Vladimir Putin. He received rave reviews both at home and even some abroad. But other than pats on the back, what did Putin tangibly get? Nothing.

President Trump made no policy changes on American or North Atlantic Treaty Organization (NATO) postures nor did he commit to any agreements that would benefit Russia. Only time will tell for sure, but the summit still has the potential to be a net-positive for the United States. In contrast to the nothing Putin got as a result of the meeting, he remains stuck with the concrete actions Trump has taken against the Russian president.

It was the substance of the summit, not the style of the participants, that matters and will ultimately be remembered. The suggestion that Trump is in Putin’s pocket is hard to square with actions: within just the past year alone, Trump has expelled scores of Russian diplomats, launched military strikes in Syria against Russian protests, provided lethal arms to Ukraine against Putin’s wishes, and imposed yet more sanctions against Moscow.

America’s conventional military is still substantially stronger than Russia’s. NATO’s combined strength dwarfs that at Putin’s disposal. America’s and Europe’s economies are far more diverse, strong, and considerably more substantial than that of Russia. Americans have to respect Russia because they are a nuclear weapons state on par with the United States. It is in America’s interest to maintain stable relations with Moscow, working with them where interests align and standing firm where they conflict.

What is not in America’s interest, however, is unnecessarily antagonizing Russia as many of Trump’s critics advise, giving away opportunities to have Moscow’s cooperation on issues that benefit Americans, and keeping the risk of future miscalculation pointlessly high. Russia is the economic equivalent of Italy with nukes. They are not ten feet tall—but neither are they two feet tall. American policy should reflect these realities to its advantage and not fall victim to emotional reactions to its current president.

Daniel L. Davis is a lieutenant colonel in the U.S. Army who retired in 2015 after twenty-one years, including four combat deployments. Follow him @DanielLDavis1. The views in this article are those of the author alone and do not reflect the views of Defense Priorities.