America Needs to Prepare for a Great Power War 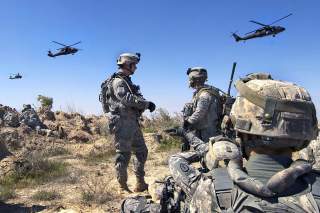 Mobilization of American society for World War II was a major factor in the Allied victory. More importantly, it was the foremost reason for the extreme disparity between American military deaths and those of our enemies. Germany lost ten times more military killed in action than the United States, and Japan lost nine times as many. The raw figures are 292,000 Americans and 2,900,000 Germans—and Germany had a population only 60 percent of that of the United States. The ratio with Japan was similar. The United States also out produced both enemies, building double the combined Axis output. That industrial output (a generous part of which went to our allies) mattered immensely, as the figures above indicate.

In both theaters America also supplied its allies (especially Soviet Russia and China) fighting Germany and Japan with weapons and other necessities. The Soviet Union, for example, killed almost 80 percent of all the Germans who died in uniform during World War II. The Soviets were given 10,000 tanks to fight the Nazis, and the British received 20,000 tanks from America. Both allies received more than 10,000 airplanes from the United States. The Soviets also received millions of tons of armor plate to build tanks.

The Soviets built 54,000 tanks with that armor plate—the Germans fewer than 20,000—while the British built 20,000 tanks and the United States 88,000. America gave the Soviets more trucks for logistics in three years of Lend-Lease than the Germans produced in the six years of the war.

Hitler sunk United cargo ships to stop America’s Lend-Lease efforts, but the America built Liberty ships faster than German submarines could sink them. Over the course of the war, the United States manufactured two cargo ships per day, ten Missouri-sized battleships, seventeen Midway-sized aircraft carriers, and more than 600 destroyers to escort and guard the Liberty ships (Germany built no aircraft carriers or battleships after we entered the war).

After the forty-three-day victory over Iraq in 1991, President George H. W. Bush doubted the necessity of retaining a mobilization planning organization. Bush’s successor, Bill Clinton, followed his lead. The last whole-of-government mobilization exercise occurred in the early ‘90s. But the world has changed since then.

The government’s mobilization planning organization continued from the 1950s through the 1970s. These deep roots in the national defense organization helped the country to mobilize to fight in Korea and Vietnam. It became a part of the Federal Emergency Planning Agency (FEMA) in 1979.

In 1990, when tensions were growing in the Middle East, the mobilization unit consisted of 360 people (the size of a military band). When Iraq occupied Kuwait in August 1990 the office ballooned with people from many essential government agencies—people who exercised together annually for decades.

This organization under FEMA’s supervision, drove the mobilization effort for Desert Storm and Desert Shield. The result was victory with American losses in the single digits (fewer than fifty killed in action) versus the tens of thousands that Iraq lost. The agency in FEMA no longer exists!

There is one mobilization planner (who has no staff) in FEMA, now a part of the Department for Homeland Security (DHS). He is busy seeing the most important mobilization law and extant Executive Orders are kept up to date. These documents were written when the government took mobilization seriously. Since there have been no mobilization exercise for twenty-five years, people with mobilization responsibilities have not worked together for a quarter of a century.

We need to resurrect a mobilization planning office, today. Russia and China are expanding their military power, but Beijing poses the larger threat—it is  now the world’s second largest economy, which is growing at triple the rate of the United States. Both powers, especially Moscow, are openly threatening U.S. allies and partners.

I am not calling for a World War II mobilization-size organization, just for a post–Korean War mobilization planning entity. This office would be able to keep up with the defense industrial base, help arrange for materiel replacements, monitor raw material shortages, pay attention to demographics that could affect wartime capabilities, and exercise all of the offices in our vast government responsible for mobilization (at least) annually. Planning for mobilization is cheap, failing to do so could be outrageously expensive.

Dr. Alan Gropman is the Emeritus Professor of National Security Policy at National Defense University and an Adjunct Professor at George Mason. He accumulated four-thousand flying hours mostly in the C-130 and had two combat tours in Vietnam.