America Needs a Pushback Plan for Dealing With a Calculating China 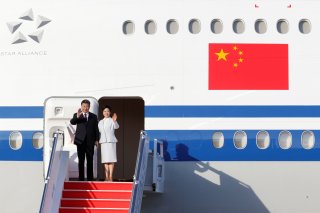 China is at war with America even if it doesn’t know that it is at war with China. Few of its citizens have connected the dots. China’s goal is to establish global economic supremacy by 2049. It is striving to displace the United States from global leadership and render other nations its economic tributaries. This war is not about the Chinese people. It’s about China’s authoritarian leadership, which is led by Xi Jinping.

China likely did not originally intend to engage in a war. But the coronavirus got away from them. Rattled by fears of losing legitimacy at home and credibility abroad, Xi pivoted from defense to offense. China allowed people to travel from the motherland to the West while imposing a quarantine at home. It closed its borders to foreigners as the crisis eased. It refused to timely share scientific data, hoarded medical supplies, and is now waging information war absolving itself from fault and blaming the West. Xi saw an opening and gambled. Perhaps he miscalculated the harm in letting the virus loose on the world. But as John Adams said, facts are stubborn things.

One must understand how China views warfare. Western notions are, as Grotius stated,  “a state of forcible contention; an armed contest between nations.” (Gro. de Jur. B. lib. 1, c. 1). China’s approach eschews armed conflict. Rooted in Sun Tzu, its Three Warfares concept and notion of unrestricted warfare embrace deception, diplomatic and economic pressure, and seek relative gain over an opponent. Its notion governs how we must judge its actions.

China seeks global economic supremacy. It has poured investment into the infrastructure of developed and developing economies to create dependence on, and subservience to, Chinese economic power. Its handling of the virus has escalated that pursuit from a competition for global influence to—applying its notion of warfare—a state of war. President Xi likely acted foolishly. China would have been better off showing transparency, sharing medical supplies, and helping the world. One wonders if his strategy will impair his credibility with the Politburo’s Standing Committee.

One cannot overstate the historic importance of Xi’s 2049 vision. It displaces the United States from global leadership. But if the United States wishes to be the global leader, then it must act like it is one. What should be done? Each action step would benefit from bipartisan buy-in and alliance with international partners. Presidents Abraham Lincoln and Franklin Roosevelt recognized that winning their wars required unity among Americans. President Donald Trump would benefit from doing the same, and he can make it happen. Americans are furious with China. The president has indicated an interest in ameliorating tensions with Russia. Russia is neither a friend nor ally. Still, on this issue, its security interests mirror America’s security interest. The 2049 Initiative gores its ox along with America’s. Invite it to the coalition. The coalition should act together, and as much as possible, with a unified voice.

America must make clear that China’s war is against the international community, not just the United States. The coronavirus has caused deaths, infections, and derailed economies everywhere. Let’s frame this war as China versus the world. Bipartisan buy-in and an international coalition would strengthen America’s credibility in making this case. Additionally, America must discredit and de-legitimize China’s 2049 vision by taking its behavior to the UN Security Council for action and calling it out everywhere. China would veto a resolution. But UNSC offers a great venue for exposing China’s pernicious vision and tactics and knocking it off the moral high ground. China’s leadership understands that the result will undercut its credibility and legitimacy.

The key elements of China’s strategy are its Belt and Road Initiative⁠—a debt-trap for unsuspecting nations⁠—and efforts to make Chinese components and technology like Huawei’s 5G the backbone of future technology. Both undercut the economic and political sovereignty of all other nations. Huawei’s technology has security vulnerabilities and spyware. The Chinese Communist Party’s goal is to control the infrastructure behind the global internet. That will put freedom and privacy at serious risk.

Plus, as Anne-Marie Brady’s White Paper shows, the scope and depth of China’s actions to suborn foreign media, officials and influentials runs deep. America needs to awaken nations to the grave threat. This is a story that the media has fumbled in reporting.

America needs to develop its own medical manufacturing capacity. It imports a high percentage of its antibiotics and medical compounds from China. That’s unacceptable, especially as in the past, China has threatened to weaponize its capability. Thus, America must become medically self-sufficient. Additionally, it must persuade companies and nations to refuse Chinese investment. Chinese money gains it entry into technology companies, enables intellectual property theft, and renders them dependent upon Chinese financing. In the longer term, the international community needs to disentangle its economies from China’s economy. After all, economic influence was what enabled China to pressure the European Union into softening criticism of its propaganda campaign.

America should establish a federal fund to provide grants or incentives to start new industries at home in vital economic sectors where the components currently come from China, removing the need to rely upon Chinese imports. America must demand that China shut down the sale of wildlife in its wet markets. In theory, it already supports the idea and could be prodded into enforcing tough bans. The current practice is a public health risk and slaughtering endangered species like Koala Bears and Pangolins for meat is morally outrageous. If internationally pressed, then China may well do this. The smart play would be for China to do it before being pressured into doing it⁠ and extend an aggressive ban to elephant tusks and rhino horns. If China wants a piece of moral high ground, then it needs to earn it.

America must also secure financial compensation. It should repeal the Foreign Sovereign Immunities Act to give companies ammunition when suing Chinese companies that breach contracts or inflict harm through defective products they sell. Chinese parties exploit America’s judicial processes to sue those it claims harmed it. When the tables are turned, those same parties invoke sovereign immunities laws to shield their own liability. That’s absurd. America should also require China to satisfy all outstanding court Judgments against its state-owned enterprises.

Other steps, such as possibly seizing the trillion dollars in Chinese-owned U.S. Treasury notes held by the Federal Reserve, may have highly undesirable knock-on consequences. Let’s think through carefully what works best and act with bi-partisan support. Action must be hard-nosed and tough but success seems more likely acting with allies in securing compensation and being prudent. How China’s actions are characterized—as war or something short of that—may govern what is most plausible.

America must calibrate its actions to provide positive and negative incentives for China’s leadership to behave responsibly in the future. Retribution is insufficient. Whatever has been done, has been done. History will judge the United States and the international community on what it does moving forward. The future of the planet is at stake.

James P. Farwell is a national security expert who has advised the U.S. SPECIAL OPERATIONS COMMAND. He is the author of Persuasion & Power (Washington: Georgetown U. Press, 2012) and The Pakistan Cauldron (Washington: Potomac Books, 2011). The opinions expressed are his own and not those of the U.S. Government, its departments, agencies, or COCOM.