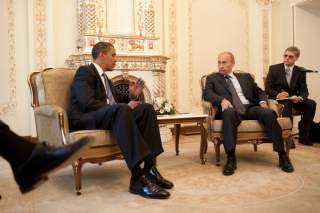 The outrage at Russia is more than sufficient. What Washington needs is a policy. Particularly in the aftermath of the MH17 tragedy, the drive to punish Russia, to raise the costs of its aggression against Ukraine by levying harsher sanctions and seeking to isolate it internationally, is understandable; it might also meet a profound psychological need to demonstrate that we are not indifferent to the loss of nearly 300 innocent lives. But punishing Russia falls short of a credible policy.

We need to ask hard questions about what we want to achieve, how we want to achieve it and the consequences of our actions. Today's turbulent world offers no easy answers or moral clarity. To protect and advance our interests, we will be compelled to make trade-offs that are less than fully morally satisfying. That is an inevitable part of statecraft.

Amidst the passions and calls for action against Russia, what do we need to consider?

First, sanctions. Whatever their effect in the long run, in the short run, they have only served to bolster Putin at home and energize ultranationalist forces, particularly prominent in the military and security forces. Although they may alter his tactics, they have not deterred Putin from pursuing what he sees as a vital Russian interest, securely anchoring Ukraine in Russia's sphere of influence. Despite international censure, Russia continues to send heavy equipment to the separatists in eastern Ukraine; fighting on the ground has intensified. If Putin yields to domestic pressure to send the troops across the border, what is the West prepared to do to defend Ukraine, especially since we have ruled out the use of force? Simply more sanctions?

Second, Ukraine. We want to encourage Ukraine to take a Western path, while defending its sovereignty and territorial integrity. But Ukraine is broken, politically and economically. Russian aggression has not created, but has highlighted the domestic fissures between East and West, between the elites and the rest of society, and among oligarchic clans that have bedeviled Ukraine since its independence. Even if the separatists are defeated, Ukraine will need a generation—and billions of dollars—to build a component state and repair the economy. Does the West have the patience and resources for such a task, given its own profound socioeconomic problems? The recent trials in agreeing on rescue packages for profligate European Union members would suggest that it does not. Moreover, how does the West plan to repair without Russian help an economy that is—and will long remain—dependent on Russia for energy and needs Russia as a market for its manufactured goods, which will not soon meet the EU's stringent standards?

Third, the Transatlantic Community. While everyone is mesmerized by Asia, it remains true that America's closest and best partner is Europe. We should be devoting considerable time and effort to restoring ties, especially with Germany, that have frayed because of neglect and more recently NSA-leaker Snowden's revelations. Concluding negotiations on the Transatlantic Trade and Investment Partnership (TTIP) should be a priority. But our rush to sanctions, our desire to lead the West, has only exposed further rifts between the United States and Europe and within Europe itself. Even after the MH17 tragedy, key European states are reluctant to adopt more stringent sanctions, because their deep commercial ties to Russia leave them much more vulnerable than the United States is to Russian retaliation at a time when they have not fully recovered from the global economic crisis of 2008-09. Europeans are not closing ranks under U.S. leadership.

In addition to sanctions, we are also pressing for revitalizing NATO against a resurgent Russia. To be sure, there is an urgent need to reassure the most vulnerable allies about our commitment to collective defense. But the Russian challenge is not so much a conventional military one (NATO has the superior forces) as a socioeconomic one, as its actions in Ukraine demonstrate. And NATO allies should not be focused so much on building up their capacity for conventional warfare or acquiring new capabilities as on tending to the internal problems that Russia might exploit, including the Baltic states' treatment of their ethnic Russian minorities, as well as the growing prominence of populist, anti-EU forces.

Fourth, China. One immediate consequence of our effort to isolate Russia has been Moscow's redoubled effort to enhance its ties with China. Putin made a huge show of his trip to China in May to celebrate, as the joint statement put it, "a new stage of comprehensive partnership and strategic cooperation." He made a special point of heralding progress toward the formation of a "Sino-Russian energy alliance," which he said would be a critical element of energy security throughout the Asia-Pacific region. The showpiece was the thirty-year, $400-billion gas deal. But Russia is no longer negotiating from a position of strength, and the current troubles with the West will only further weaken it. The Chinese will have no qualms about taking advantage of the Russians, even as they talk of partnership. As a result, in punishing Russia, which does not pose a strategic threat, we are easing the strategic calculus of China, our greatest strategic challenge.

Fifth, global economic governance. Economic sanctions appear to be a powerful instrument with which to check our opponents, while avoiding the risks of the use of military force. Whether or not that is indeed the case, we need to think about the long-term consequences of resorting to sanctions against a major economy for the global economic system we created after the Second World War and which has been a foundation of our prosperity and power ever since. Inevitably, other states will look for ways to defend themselves. The BRICS' recent decision to build alternatives to the IMF and World Bank and to clear more of their trade in their own currencies is a harbinger of things to come; even theirs looks like an uncertain enterprise at the moment.

Sixth, Russia. This is the most complicated piece in the strategic puzzle. While we want to contain Russian aggression in Europe, Russia could still prove to be a partner in managing the turmoil in the Middle East, resolving the Iranian nuclear issue, and containing instability in Afghanistan as U.S. forces withdraw. In the long run, it could serve as a useful hedge against China's rise. But treating Russia as an adversary and levying harsher sanctions threaten to excessively weaken a country that could be an important player in building and maintaining a global balance that advances American interests.

In the end, as much as many might prefer it to be otherwise, we will have to accommodate Russia to some extent, as we did the Soviet Union during the Cold War, for our own strategic purposes. We should be debating the nature and extent of that accommodation, not simply how we can punish Russia more severely. To that end, we need to establish our global priorities, be honest about the limits of our still formidable powers, and weigh the costs and benefits of possible trade-offs with Moscow. Moral outrage does not absolve us of the responsibility to think critically about the consequences of our actions and, with regard to Russia, develop an effective and sustainable policy.