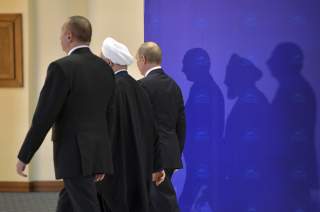 Azerbaijan, a small but important country located in the South Caucasus on the Caspian Sea, deserves more attention from U.S. policymakers.

U.S.-Azerbaijani relations date back to the Paris Peace Conference after World War I, during the early and short-lived days of the Azerbaijan Democratic Republic.

A few years after meeting with the Azerbaijani delegation at the peace conference, President Woodrow Wilson recounted the event during a speech delivered in San Francisco:

Much has changed in the world since then, but Azerbaijan remains an important partner for the United States for a number of reasons.

On the security front, Azerbaijan is making a meaningful contribution to the war on terrorism. It recently increased its troop presence in Afghanistan to 120 soldiers. While this might not sound like much, it exceeds the troop contributions of twenty-six other countries including NATO members like Spain, the Netherlands and Norway.

Azerbaijan is helpful on the diplomatic front, too. It will soon host the third high-level meeting between U.S. and Russian military leaders. Gen. Curtis Scaparrotti, the supreme allied commander of NATO, who also serves as the top U.S. military commander for Europe, will meet in Baku with Gen. Valery Gerasimov, the chief of staff of the Russian Armed Forces.

Such meetings are especially useful given the frosty state of U.S.-Russian relations. They present a nonpolitical opportunity for the United States to discuss, on a military-to-military level, issues such as how to prevent accidents in Syria where both the United States and Russia are militarily involved. Meetings like this led one veteran observer of the South Caucasus to ask: “Is Baku the new Caucasian Geneva?”

Azerbaijan has also proved to be a reliable U.S. partner regarding another sensitive geopolitical issue: Israel. Although Azerbaijan is a Muslim-majority country, it is a secular society and has a very close relationship with Israel. The Azerbaijani city of Qirmizi Qasaba is thought to be the world’s only all Jewish city in the world outside Israel. Azerbaijan also provides Israel with 40 percent of its oil.

America, too, has strong economic and energy ties to Azerbaijan. The largest port on the Caspian Sea, Baku is the transportation hub for goods shipped between Europe and Central Asia.

And since the first oil well was drilled just outside Baku in 1846, the city has been vital to the region’s oil and gas industry. American energy companies have been involved with oil and gas exploration and extraction in Azerbaijan since the 1990s. For Europe, Azerbaijan serves as a significant alternative to Russia for oil and gas supplies. This improves Europe’s security and, by association, the security of the United States.

Though more can be done, Azerbaijan has made meaningful progress in liberalizing its economy over the past two decades, even with the significant drop oil prices. In 1996, the first year that The Heritage Foundation included the country in its Index of Economic Freedom, Azerbaijan ranked 134th in the world in terms of economic freedom. Last year, the Index ranked Azerbaijan 68th, placing it ahead of Spain, Italy and France.

There remain sticking points in the U.S.-Azerbaijan relationship. Human-rights abuses have been a persistent problem. In recent years, concerns about press freedom have risen due to a number of high-profile arrests of prominent journalists.

On the latter front, at least, things may be looking up. Recently, the government dropped all charges against Mehman Aliyev, director of Azerbaijan’s independent Turan News Agency. Aliyev had been arrested and detained last summer over alleged tax fraud.

Shortly after the journalist’s release, Azerbaijani president Ilham Aliyev (no relation) sacked the country’s long-serving tax minister, Fazil Mammadov. Mammadov was thought to be responsible for the allegations against Mehman Aliyev. More needs to be done to improve press freedom in Azerbaijan, but the release of Mehman Aliyev and the firing of the tax minister are important steps in the right direction.

And while America should continue to press for improvements on human-rights issues, U.S. policymakers cannot allow that one issue to create a lopsided foreign policy that undercuts larger U.S. interests in the region.

Economically—and in the energy sector especially—Azerbaijan will continue to be an important regional player. As seen with the recent U.S.-Russian military meetings, it also plays an important role as an honest broker between West and East. America needs partners like Azerbaijan. If correct policies are pursued, U.S.- Azerbaijan relations can serve both countries equally and for the better.