Is America Negotiating with the Islamic State? 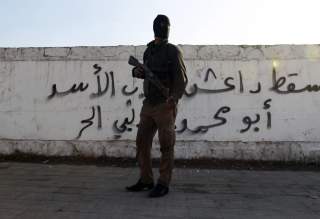 On January 28, 2017, months after then-candidate Donald Trump vowed to wipe the Islamic State off the face of the earth and bomb the group into smithereens, the businessman-turned-president issued a presidential memorandum ordering Secretary of Defense Jim Mattis, in consultation with other national security cabinet members, to submit to the White House a comprehensive war plan within thirty days. The president’s memo was as clear as a glass house: "It is the policy of the United States that ISIS be defeated.” It was the Pentagon’s duty to report back with a strategy that would accelerate the military campaign and bring the United States closer to that objective. While the memorandum was overshadowed a day later by Trump’s first travel ban, the January 27 executive order was nonetheless a public communication to the American people that the forty-fifth President of the United States would provide whatever resources the commanders needed to win the war.

War plans, however, have a habit of unravelling on the battlefield when exigent circumstances come up. Despite Defense Secretary Mattis’s pronouncement last spring that the U.S.-led international coalition would surround ISIS foreign fighters, strangle their freedom of movement, and kill each and every one of them before they had a chance to escape from Syria or Iraq, the reality of the situation is much hazier. On several occasions, ISIS foreign fighters have been allowed to evacuate with their families from besieged cities to safer terrain along the Syria-Iraq border. And in at least one case uncovered by the BBC and corroborated by Reuters last week, Washington not only knew about these evacuations plans, but allowed them to happen.

Pentagon officials strongly deny any suggestion that the United States negotiates with the Islamic State in any capacity. Officially, the war plan is the same as it was when Trump first took the presidential oath: suffocate ISIS militarily, combat its perverse ideology politically, weaken the power of its propaganda and incitement to violence on the internet and limit its funding streams. Yet there have been times this year when local power brokers on the ground, some of which have been supported by the United States, have struck agreements with tired and demoralized ISIS militants to vacate an area in exchange for assurances that it will not be attacked along the way.

In an exhaustive report filed by the BBC’s Quentin Sommerville and Riam Dalati last month, as many as 4,000 ISIS militants and their families were permitted to hop onto trucks out of the city of Raqqa and travel to ISIS territory in Deir ez-Zor. The fighters could bring their weapons with them, but they would be required to refrain from flying any ISIS flags on the convoys in order not to arouse suspicion. The two BBC correspondents interviewed the truck drivers who drove the convoy (which reportedly included fifty trucks, thirteen buses and more than 100 of the Islamic State group’s own vehicles with weapons piled in them), the shopkeeper in the desert who sold food to the fighters during their journey, the smugglers who snuck some into Turkey, and the U.S. military spokesman of the counter-ISIS military campaign who acknowledged that coalition warplanes were observing the convoy from above. One of the smugglers, a man named Imad, testified how he transported a number of foreign jihadists into Turkey, “Some...talking in French, others in English, others in some foreign language.”

Talal Silo, the former spokesman for the Syrian Democratic Forces, the main ground force assembled by the counter-ISIS coalition to retake territory from the jihadist group in northern and eastern Syria, told Reuters last week that a U.S. military official was in on the evacuation deal from the start. Journalists, he said, were kept out of the area on the prexet that heavy fighting against ISIS was continuing inside the city of Raqqa, when in reality the security measures were a ploy to ensure that exposure of the withdrawal agreement to the media was contained. U.S. military officials called Silo’s story "false and contrived,” but the narrative the former SDF spokesman offers is at least consistent with some of the BBC’s earlier reporting.

Whether or not Washington approved the staged ISIS withdrawal or not, the events that occurred towards the tail end of the Raqqa offensive is only one example of these kinds of tactical arrangements being made. Throughout Syria’s seven years of war, combatants from the Assad regime and Kurdish militias to Iranian-funded and organized Shia defense forces have found it in their interest to let their enemies go through a negotiated surrender rather than accomplish their objectives through military force.

Bashar al-Assad’s regime has used this tactic to make up for a lack of manpower on the ground. In what are accurately termed “starve or surrender sieges” on opposition-held neighborhoods, the Syrian army and their Shia militia supporters have specialized in literally starving civilians to death in order to break the will of insurgents fighting the government. Districts are surrounded and the people who live in them are unable to escape, humanitarian evacuations into the zones are denied, food, water and medical equipment are cut off, and bombings continue for as long as the besieged force contacts Damascus and agrees to surrender in exchange for a safe withdrawal to the part of the country. The Syrian regime calls these accord reconciliation agreements, but the term doesn’t fool anyone; in reality, they are forced and organized displacements of antigovernment fighters and civilians who are misfortunate enough to live with them.

In the Syria-Lebanon border area this summer, the Lebanese army, Hezbollah, the Syrian government and the Islamic State agreed to a similar arrangement. After months of being unable to dislodge jihadists from the mountainous territory along the Syria-Lebanon border, Beruit and Hezbollah accepted an idea proposed by the remaining ISIS fighters that would allow them to hop on buses and travel to Deir ez-Zor province. The Lebanese would receive their dead and any prisoners that ISIS captured during the course of the fighting. The deal was accepted, and hundreds of ISIS fighters made the trip. While the United States was deeply opposed to the plan and viewed it as an unfair and dangerous concession to a group that the region was supposedly trying to eliminate, U.S. military officials—at the request of Russia—chose not to bomb the convoy as it snaked its way across the Syrian desert (U.S. aircraft did, however make the route more difficult by bombing the main road).

The Syrian opposition units seeking to overthrow Bashar al-Assad are not immune from such deals either. In what has been referred to as the “four towns agreement,” Sunni jihadists, Hezbollah, and Syrian army units agreed to simultaneously evacuate Sunni civilians besieged in rebel-controlled towns of Madaya and Zabadani in return for an evacuation of Sunni civilians in the government-controlled towns of Fua and Kefraya. The United Nations blasted the population movements as forced and involuntary displacements that were likely against international law and the laws of war, even as the combatants calculated that this was the only way the men with guns could be expelled without more bloodshed and more casualties.

From the U.S. point of view, any withdrawal of ISIS from an area where the group is under extreme military pressure is far above and beyond inappropriate—it boils down to being a second life for men who a short three years ago enslaved Yazidi women, summarily killed minorities in Iraq, and beheaded several American journalists and western aid workers. And indeed, the arrangements in effect give ISIS an opportunity to escape and live to fight another day (and if some are resourceful enough, an opportunity to sneak across the border in Turkey). But for local forces on the frontline, these kinds of population transfers are better than launching an assault against an enemy that is well dug-in to their positions and determined to die rather than be taken prisoner.

As in life, where you stand is where you sit. Faced with a choice between dying a miserable and painful death and escaping with your life to recharge your batteries and plan for the future, even the Islamic State is not above a tactical negotiation at times.