America Is Not Ready for the Drone Threat 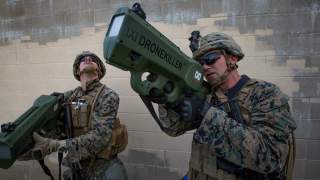 Drones are exploding in popularity, but if certain nefarious individuals have their way drones may soon be actually exploding. There is a real potential for enemies to use drones to harm Americans and damage our nation’s critical infrastructure.

Already, overseas terrorists are deploying drone bombers. Domestic criminals are also using drones to commit an array of crimes, including ferrying contraband into prisons, with disastrous consequences. Earlier this month, an FBI official reported that a drone swarm disrupted a hostage rescue operation by driving agents from their observation post.

Unfortunately, efforts to counter such threats are currently hamstrung by a series of federal laws that make it difficult, if not impossible, for law enforcement agencies to effectively interdict or engage a drone. The reason for this is because doing so would risk criminal prosecution for violating U.S. laws that make it a crime to damage or destroy an aircraft, hack a computer, or interfere with wireless communications, among others.

By all accounts, the criminal drone operations we have so far seen are the tip of the iceberg. Like the innovators and entrepreneurs who are constantly inventing new, lifesaving uses for small Unmanned Aircraft Systems ("UAS"), criminals are adapting drone technologies for their illicit aims.

Furthermore, just as market forces are driving exponential growth in lawful drone operations, so too are we likely to see more illegal UAS conduct.

That’s why the Heritage Foundation has written at length about the crucial need to develop a comprehensive legal framework for counter-drone operations, one that identifies and provides relief from the laws and regulations that today are hindering the development of counter-UAS (CUAS) platforms and capabilities.

Congress, it appears, also recognizes the urgency of this situation. In the National Defense Authorization Act (NDAA) of 2017, federal lawmakers gave the Departments of Defense and Energy limited CUAS authority to "[u]se reasonable force to disable, damage, or destroy" drones over select facilities, to, among other things, safeguard the nation's nuclear deterrent.

Congress then expanded that authority in the 2018 iteration of the NDAA, to give DOD additional authority to “[d]etect, identify, monitor, and track” UAS, as well as “[d]isrupt control of” or “seize” UAS.

To make that possible, Congress exempted DOD counter-drone operations from the aircraft piracy statute (49 U.S.C. § 46502), as well as the entirety of the U.S. criminal code (Title 18).

Such exemptions are needed in light of federal laws that currently prohibit specific technologies and tactics for hostile drone mitigation. For example, because the Federal Aviation Administration considers drones to be "aircraft" for purposes of federal law, without statutory exemptions, an attempt to seize control of or destroy a two-pound drone would—as bizarre as this may sound—run afoul of laws written to criminalize damaging or destroying manned aircraft.

The bill mirrors the approach taken with DOD in the NDAA—an approach advocated by Heritage analysts.

The bill would authorize DHS and DOJ personnel to identify, track, seize, seize control of, or “[u]se reasonable force” to disable or destroy drones in furtherance of their respective missions.

DHS, for example, would be empowered to protect the property and assets of the U.S. federal government. The Secret Service would be granted CUAS authority, as would the U.S. Coast Guard and Customs and Border Protection, a critical provision given the alarming uptick in the use of drones to ferry drugs into the U.S. from Mexico.

DOJ, meanwhile, could utilize CUAS equipment as part of its various missions. This equipment would include personnel protection to safeguard "Federal jurists, court officers, witnesses and other persons in the interests of justice." CUAS could also be used to halt illegal drone activity in the vicinity of federal prisons.

The bill would also authorize both DHS and DOJ to deploy CUAS equipment in the event of a national security threat, such as a potential terrorist attack undertaken via drone, or at National Special Security Events like presidential inaugurations or the Super Bowl.

All of these are highly positive and necessary policy developments and will make it possible for the federal government to begin to safeguard vulnerable targets and critical facilities.

Still, the Preventing Emerging Threats Act could be improved in several key areas.

First, more could be done to set the stage for state and local law enforcement to engage in CUAS activities, since it is ultimately local law enforcement that bears the most significant burden in safeguarding our communities. The bill proposes authorizing DOJ and DHS to provide federal CUAS assistance to state, local, and tribal law enforcement officials "upon the request of a State's governor or attorney general…where appropriate and within available resources." Given resource constraints and the sheer number of potential targets scattered throughout the United States, it is easy to see that this system could quickly become bogged down in unfulfilled requests.

At Heritage, we have outlined a potential path forward: the establishment of a pilot program, modeled after the existing DHS "287(g)" program, to select a diverse set of state and local agencies and deputize officers within those departments to engage in CUAS activities under federal guidelines and supervision. This type of program would balance the need to expand CUAS capabilities beyond the federal government with the need to ensure that these novel, and potentially disruptive technologies, are correctly deployed and used.

Second, the deployment of CUAS platforms and capabilities at the nation’s airports should be a priority. According to the FAA, pilot-reported sightings of drones in the first nine months of 2017 grew by 24.49 percent as compared to the same period the year before. Though only a scant portion of these sightings were genuine near-misses, the fact remains that drones are flown—whether negligently or deliberately—dangerously close to manned aircraft.

The Preventing Emerging Threats Act calls for a study within one year to evaluate the threat posed by UAS to “domestic large hub airports,” and “an evaluation of the knowledge of, efficiency of, and effectiveness of current procedures and resources available to owners of…domestic large hub airports when they believe a threat from unmanned aircraft systems is present.”

This bill is welcome, mainly since the study would also make recommendations to improve upon deficiencies. Nevertheless, given the clear and present threats posed by drones today, lawmakers would be wise to consider expanding CUAS authorities to include airports, as well.

It is increasingly clear that even as drones continue to prove themselves in new and lifesaving arenas, they can also be used by bad actors to cause harm. Americans have every right to expect that their law enforcement officials can effectively engage and interdict these new threats.

But the first move lies with lawmakers, who must clear up the legal tangle that is hindering the development and deployment of CUAS technologies. And although the Preventing Emerging Threats Act of 2018 could be improved, at least it would meaningfully advance crucial counter-UAS policy.

Jason Snead is a senior policy analyst at The Heritage Foundation (heritage.org).

John-Michael Seibler is a Legal Fellow in Heritage’s Meese Center for Legal and Judicial Studies.