Is America Preparing for Conflict with China? 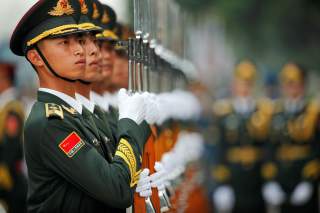 The delicate U.S.-China relationship survived President Donald Trump’s first year in office without too many surprises. However, at the start of his second year in the White House, some dark clouds are hovering over the relationship.

Recent developments in Washington make one wonder whether some people in the U.S. government are actively seeking confrontation with China. On January 9, 2018, the House of Representatives passed the Taiwan Travel Act, indicating that it wants the U.S. government to “encourage” visits between U.S. and Taiwanese officials “at all levels”—including officials from the State Department and Defense Department. If the Senate were to pass a similar act, and if President Trump were to sign it into law, then the unofficial U.S.-Taiwan relationship would be upgraded to an official level, which would surely send U.S.-China relations into a tailspin. The Taiwan Travel Act arguably violates the 1979 Taiwan Relations Act, a U.S. law which set up the American Institute in Taiwan as a “nongovernmental entity” to promote “commercial, cultural and other relations” between the United States and Taiwan.

The House passed “Taiwan Travel Act” on the heels of President Trump’s signing of the 2018 National Defense Authorization Act in December 2017. The act contains some important items related to Taiwan. For example, it suggests that the United States “should” invite Taiwan to joint military exercises with the U.S. military and consider the advisability and feasibility of reestablishing port of call exchanges between the U.S. and Taiwan navies. This undoubtedly raises a big red flag in U.S.-China relations.

Taiwan is not the only issue which the United States is using to irritate China now. While complaining about unfair Chinese trade practices and threatening a trade war with China, the Trump administration ignores the fact that the U.S. market is not completely open to China. Before Trump took office, he met in New York with Alibaba’s Jack Ma, who agreed to help Trump create jobs. However, earlier this month Ma’s Ant Financial was forced to withdraw its offer to buy money-transfer company MoneyGram. Ma reportedly lobbied Trump officials for months for this merger, pledging to create jobs in the United States, but some members of Congress expressed concerns that the Chinese government had a 15 percent stake in Ant, a claim that Ant denies. Consequently the Committee on Foreign Investment in the United States blocked the bid on national-security grounds. Last year, Congress advised the committee to further scrutinize acquisitions of U.S. assets by China’s state owned businesses or firms with ties to the Chinese government.

Other Chinese businesses such as Huawei and ZTE also hit the wall recently in their plan to expand business in the U.S. Huawei is a multinational telecommunications company but has had difficulty entering the U.S. market because its founder Ren Zhengfei was a former People’s Liberation Army soldier. No convincing evidence has been produced to show that Huawei has ties to the Chinese military.

Deep trouble is also spilling to the strategic field. The new National Defense Strategy that was released last Friday identifies China and Russia as America’s biggest threats, replacing terrorism for the first time since 9/11. The document points to China’s military actions in the South China Sea as evidence of Beijing’s aggressiveness. But China and other claimants in the region have been working to lower tensions, and most notably relations between China and the Philippines have greatly improved over the past couple of years.

In the Washington policy and think-tank circles, there used to be two camps regarding U.S. approach towards China: the “panda-huggers” who promote engagement and friendly relations between the two powers, and the “dragon-slayers,” who advocate tough handling of China through deterrence, sanctions and military confrontation. The existence of the two camps and their rational debate have been healthy for U.S. policymaking. Today “dragon slayers” are sharpening their knives while “panda-huggers” seem to have either been sidelined or gone hiding.

There is an urgent need to return to a sensible and pragmatic approach to China based on common interests that has guided U.S. policy since President Nixon’s visit to China in 1972. The rise of China and President Xi Jinping’s strong leadership certainly present a serious challenge for the United States. But is poking China in the eye on issues like Taiwan and trade the best way to deal with China? Lack of public debate on China may lead to a short-sighted policy that will hurt American interests in the long term.

Amidst the turbulences, Trump and Xi spoke on the phone last week, suggesting that the two leaders are still committed to maintaining a stable relationship and settling the disputes through dialogue. Is the rapport between Trump and Xi strong enough to smooth bilateral ties? Prudence must prevail when conducting this most important bilateral relationship because the stakes are too high for the two countries as well as the international community.

Zhiqun Zhu, PhD, is a professor of political science and international relations at Bucknell University. He is a member of the National Committee on U.S.-China Relations. The views here are his own.