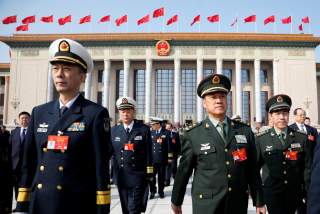 Calling China a “new hegemon,” the Economist recently declared that the “Chinese century is well under way.” It noted that Beijing accounts for roughly 45 percent of global economic growth since the onset of the 2008 financial crisis and 60 percent of the increase in global defense spending since 1990. The Trump administration has been increasingly aggressive in countering America’s putative replacement, imposing penalties ranging from 10 to 25 percent on $250 billion worth of Chinese exports; inking a trade agreement with Mexico and Canada that aims to prevent either one from pursuing a separate trade accord with China; and, more recently, banning Chinese chipmaker Fujian Jinhua Integrated Circuit Company from buying U.S. components without a special license from the Commerce Department. A growing cadre of U.S. observers holds that Washington has entered into a new Cold War with Beijing, with China representing a significantly more potent challenge than the Soviet Union ever did.

Michael Beckley is not among them. An assistant professor of political science at Tufts University, he argues not only that U.S. preeminence is safer than most contemporary commentary would have one believe, but also that it is more resilient: “Unipolarity is not guaranteed to endure,” he concludes, “but present trends strongly suggest that it will last for many decades.”

I was admittedly skeptical that Beckley’s Unrivaled: Why America Will Remain the World’s Sole Superpower would add much to contemporary debates over whether the United States is in decline and China is poised to succeed it—because, while the author is a distinguished scholar of international relations, the sheer volume of analysis on those judgments would almost seem to preclude the possibility of original thinking. Most debates offer some variant of a familiar exchange: anti-declinists cite the durability of U.S. power and the history of declinist predictions that proved premature; declinists contend that the present confluence of domestic dysfunction and external challenges is uniquely challenging. Beckley’s book is doubly surprising against this backdrop: a concise but detailed provocation, it breaks methodological ground to offer a novel assessment of America’s position in world affairs. One hopes that it finds a high-level audience in both Washington and Beijing: the United States would be less likely to succumb to fatalism were it to understand more thoroughly its bases of power and China’s corresponding points of weakness; China, in turn, would be less likely to succumb to hubris.

Expounding an essay that he published in International Security near the end of 2011, Beckley argues that a country’s aggregate power is better measured by its “net resources” than its “gross resources.” The latter, he explains, do not account for production costs, “the price a nation pays to generate wealth and military capabilities”; welfare costs, “the expenses a nation pays to keep its people alive”; and security costs, “the price a government pays to police and protect its citizens.” Because population size is the chief source of these costs, he derives a country’s net resources by multiplying GDP by GDP per capita. While his fellow political scientists will surely debate the utility of this metric—Beckley himself calls it a “primitive proxy”—his core insight—that net resources are a more accurate gauge of power than gross resources—is sound.

Beckley adduces an impressive amount and diversity of evidence in support of his argument. U.S. workers, for example, “generate roughly seven times the output of Chinese workers on average.” China’s total factor productivity growth rate, meanwhile, “has actually turned negative in recent years, meaning that China is producing less output per unit of input each year,” and “roughly one-third of China’s industrial production [goes] to waste.” In addition, “China would need to outspend the United States by substantial margins in the decades ahead just to start closing the gap in recently accumulated military capital,” and “at least 35 percent of China’s military budget goes to homeland security operations.”

In addition to demonstrating that America’s overall power remains substantially greater than China’s, Beckley notes that America’s geographical position, political institutions, and demographic outlook give it significant long-term advantages over China. He is probably right, in addition, that neither a Sino-Russian entente nor a “Western European superstate” will emerge to challenge U.S. preeminence, though what seems to be an incipient U.S. campaign of dual containment against Beijing and Moscow may increase the likelihood of the former’s materializing.

While Beckley makes a convincing case for the resilience of U.S. power, there might be at least two reasons to question the endurance of its influence—that is, its ability to harness its power to advance its national interests. First, perceptions inform realities, a distinction that the late Robert Gilpin articulated in his seminal 1981 book War and Change in World Politics: “Whereas power refers to the economic, military, and related capabilities of a state, prestige refers primarily to the perceptions of other states with respect to a state’s capacities and its ability and willingness to exercise power.” A median of 70 percent of respondents across twenty-five countries surveyed by the Pew Research Center last spring believes that China plays a more important role in world affairs than it did a decade ago; only 31 percent believe that the United States does. It is unlikely that most world leaders engage in the kind of methodical deconstruction of power that Beckley does when hedging their bets, unpacking the nuances and complexities of the kinds of top-line metrics that tend to capture inordinate attention. China is the world’s leading exporter and trading country, and its GDP is likely to exceed America’s well before the middle of the century. With a combination of national resolve (Xi Jinping heralds the arrival of “an era that sees China moving closer to center stage”), ambitious targets (China seeks to be the global leader in artificial intelligence by 2030), and geoeconomic initiatives (such as the Belt and Road), it has gone a long way towards entrenching the narrative that its centrality to globalization will inexorably continue to rise.

Second, the United States is pursuing many of the very policies that Beckley warns could undermine its preeminence. Rather than heeding the “virtues of strategic restraint,” for example, Washington often proceeds from what I have called a “do something now” doctrine, training its sights on theaters where its vital national interests are not at stake. It is expanding its military involvement in the Middle East, not reducing it, even though the past decade and a half has demonstrated both the acute limits of force and the unintended consequences of its application. Its “America First” policy is weakening its alliance network and compelling even long-standing friends to work more assiduously to circumvent the reach of its power, especially in the realms of trade and finance. Reacting in part to the disappointment that China’s growing integration into the world economy has failed to temper its illiberal tendencies, Washington increasingly appears to be preparing for an indefinite struggle against Beijing, regarding it as a multifaceted adversary rather than a complex partner with which it may yet be possible to forge a more expansive conception of world order. Finally, as Beckley laments, it is undercutting both its soft power and its economic interests by “reducing immigration, capping visas for high-skilled workers, and selecting immigrants primarily on family connections rather than merit or need.”

That the United States has a prodigious reservoir of power is beyond question. Whether it will apply that bounty prudently is less certain.