America and Russia Will Square off over New Sanctions 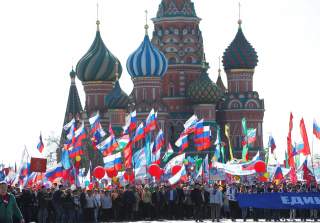 The Kremlin will likely respond to new U.S. sanctions that were recently imposed on Russia by asymmetric means.

From the Russian point of view, the new sanctions—which are codified by law—are essentially permanent, thus Moscow has little incentive to comply with American demands. Indeed, previous congressionally mandated sanctions, such as the Jackson-Vanik amendment of 1974, remained on the books long after their intended effects had come to pass. In fact, the Jackson-Vanik amendment remained in place long after the 1991 collapse of the Soviet Union until 2012 when it was replaced by the Magnitsky Act sanctions.

There is little Russia can do economically in retaliation to U.S. sanctions, but Moscow can act against American interests geopolitically. Moreover, if the United States starts to supply arms to Ukraine or launches a cyber attack against Russian infrastructure, Moscow, too, has means to make Washington’s life much more difficult.

Moreover, if reports that the Obama administration authorized the emplacement of cyberweapons in Russian infrastructure are correct, then the Russians are likely to retaliate against American infrastructure in similar ways. “It is very unlikely that the Russians would sit by passively,” Beebe said. “I think there is very likely going to be some sort of retaliation against our infrastructure, which I think is even more vulnerable than Russia’s infrastructure.”

The United States has made some critical diplomatic errors in the past several years—particularly in Ukraine. Daniel Russell, president of the U.S.-Russia Business Council and a former senior State Department official during the Obama administration, presented alongside Beebe. Russell said that instead of leaving diplomatic engagement on the Ukraine issue to France and Germany, the United States should have taken a more active diplomatic role. Moreover, Washington should step up its engagement with Moscow to resolve the Ukraine crisis.

“Part of it has to be more active diplomacy,” Russell said. “Some of us argued that the United States should have been more aggressive in trying to play a role in stopping the killing there rather than having the Normandy Format that was large a European-driven process.”

Even during the current impasse, there might be room to engage the Kremlin on Ukraine. “If you’re looking at Ukraine, certainly more active targeted diplomacy—high level diplomacy—if we really wanted to try and deal with that,” Russell said.

But if the United States continues to up the ante with measures such as arming the Ukrainian government, then the Russians are likely to make life difficult for Washington in other parts of the world. For example, Russia could provide arms to Iran, North Korea or potentially other regimes. “I think that would be justified in Russia’s mind as proportional,” Beebe said.

In some ways, the impasse with Russia is becoming an “escalatory spiral” as each side takes measures and countermeasures. “I don’t think we have reached the point of no return yet, but we’re very close to it,” Beebe said. “I think the dangers are very great that we can end up in a spiral where the domestic political factors in both Washington and Moscow will reinforce retaliatory steps and a get us into a crisis that will be very hard to control.”

In many ways, there is not much room for cooperation between the Russia and the United States under the current circumstances—even when their mutual interests align. Russell said that the White House cut off most government-to-government cooperation in 2014, which is a significant blow to any diplomatic cooperation.

“I think one thing that has happened since 2014 that has not been good in intergovernmental cooperation was the Obama administration’s decision to cut off all of the working groups at the Presidential Commission level and the day-to-day work between government agencies at the political level,” Russell said. “I don’t think that’s going to be easy to reconstitute.”

Nonetheless, there are potential areas where Moscow and Washington could cooperate. “There are areas in principle where there is some coincident to U.S. and Russian interests where ordinarily you would say, ‘Hey, those are areas where our interests align, and we should be able to cooperate,’” Beebe said. “The difficulty there is that the political environments in both capitals are going to make that cooperation very difficult.”

Thus, U.S.-Russian cooperation is not dead, but the impasse between Moscow and Washington is likely to continue for the foreseeable future.

Image: People walk with flags at Red Square during a May Day rally in Moscow, Russia, May 1, 2016. REUTERS/Maxim Zmeyev ​