America Is Sharing 'Peaceful' Nuclear Energy with the World. That's Asking for Trouble. 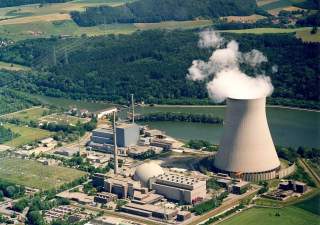 The new Trump administration will face a world in which the prospect of more countries joining the nuclear weapon ranks is greater than it has been for many years, and there are many signs that the taboos on the use of such weapons are weakening. In these circumstances, it makes sense to rethink our government’s rationale for exporting so-called civilian nuclear technology and for encouraging the worldwide expansion of nuclear energy.

Nuclear energy made its entry on the world stage with a bomb. At first we tried to restrict access to the technology to keep other countries from getting bombs. In 1954 we went to the other extreme under President Eisenhower’s Atoms for Peace program; we encouraged the spread of nuclear energy technology worldwide with the idea that “peaceful uses” would take countries’ minds off weapons. The underlying security rationale was that “safeguarding” by International Atomic Energy Agency (IAEA) inspectors would protect against any attempts to divert nuclear energy facilities and materials to weapons production.

It became obvious after the 1974 Indian bomb test that a country with pure plutonium or highly enriched uranium could make bombs faster than the IAEA could put out an alert. Since all reactors produced plutonium, and the technology to separate it was accessible, the safeguarding of nuclear energy facilities was thrown into question. The nuclear industry groups responded by arguing that the plutonium from fuel used in U.S.-type power reactors (“light water reactors”) was unusable for bombs, so there was nothing to worry about in selling these all over the world.

When that also was shown not to be true—essentially all plutonium is usable for bombs—the nuclear industry and its captured Department of Energy reversed their previous arguments in defense of spreading nuclear power around the world. Gone is the pretense that the technology is intrinsically “peaceful.” Thus, a former deputy defense secretary, speaking in Japan on a U.S. nuclear industry/government mission to support Japan’s nuclear energy program, started by acknowledging that: “Nuclear power from the very beginning was...a source of great threat because nuclear power electric generation is also the base for making nuclear weapons, and it’s a great risk to the world to have commercial nuclear power plants because there is a possibility of diverting the material and turning it into weapons.”

But the changed assessment of the dangers did not change the conclusion. The new awareness of the danger meant, the U.S. mission told the Japanese, that they and we must vigorously participate in nuclear commerce so that we can be leaders in the “international system to monitor and control the use of commercial nuclear energy.” The message, in short, is that to deal with nuclear proliferation we have to spread nuclear technology worldwide. This is, to say the least, more than a little counterintuitive.

Another twist to the new line of argument shows up in a 2013 Center for Strategic and International Studies report, Restoring U.S. Leadership in Nuclear Energy: A National Security Imperative: “A healthy domestic nuclear infrastructure also serves our national security interests by supporting the nuclear propulsion program of the U.S. Navy.” That is true, but the same would be true for foreign navies. Consider the uranium enrichment facilities that are critical for producing naval reactor fuel. The implied argument validating these will not be lost on other countries, which are very much aware that such facilities could equally well produce explosives for bombs.

The argument linking the military and civilian aspects of nuclear energy was taken one step further in a December 2016 blog from the heavily-funded, nuclear-boosting ClearPath organization: “The nuclear energy industry was born out of our WWII nuclear weapons program...Nuclear for energy and nuclear for national defense have been tied together ever since. There are a bunch of overlaps which will not change.” It points out, for example, that the tritium needed for U.S. nuclear weapons is produced in a civilian TVA power reactor. Unlike the United States, ClearPath says, China and Russia are forging ahead with nuclear energy generation and thereby strengthening their weapons side as well.

If civilian nuclear energy use provides vital support for nuclear navies and for the nuclear weapons themselves, do we really want to offer a leg up to states overseas that would like to have them? What this message from the industry admits, albeit inadvertently, is that in pushing increased dependence on nuclear power abroad, we are facilitating nuclear proliferation.

During the election campaign, Mr. Trump made a number of statements on nuclear issues. One thing stood out—he didn’t want to encourage the spread of nuclear weapons. If we face up to the links between nuclear energy for peace and war, we would at the very least want to cut back subsidies for U.S. nuclear exports, such as those provided by the Export-Import Bank. It would also call into question the Energy Department’s involvement of numerous foreign partners in nuclear reactor projects that depend on the commercial separation of plutonium from spent nuclear fuel—the very technology that brings countries within arm’s reach of a bomb. And we should take a hard look at the IAEA, which is still too much of a nuclear promotional agency, especially in its relations with developing countries, which it steers toward dependence on nuclear technologies.

The fundamental security question that the government has evaded for decades and needs to be addressed is: If the civilian and military aspects of nuclear energy are tied together, does our unquestioning support for nuclear energy for the entire globe make sense?