America Should Not Fall for North Korea's Belligerence 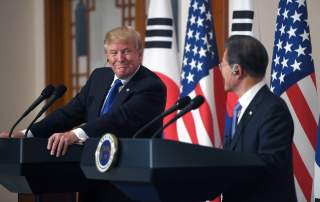 It’s been nearly a year since Donald Trump became president of the United States—and in that time, he’s managed to dangerously escalate tensions between the U.S. and North Korea, demonstrating a readiness for military action that is alarming to many. Last April, the president warned that “major, major conflict” with North Korea could be possible—and earlier this month, he sent out a tweet regarding the nuclear capabilities of the United States, and his readiness to use them.

In contrast, South Korean president Moon Jae-in has pursued a very different strategy in his dealings with his country’s neighbor. During his New Year’s speech, North Korean leader Kim Jong-un used surprisingly conciliatory language regarding South Korea, noting that he wanted to talk “as soon as possible” with the neighboring nation. He also expressed hope that North Korean athletes might participate in the upcoming Pyeongchang Winter Olympic games. South Korea’s political leaders immediately responded with positive affirmation: last week, the two countries re-established contact using a hotline that had been dormant for nearly two years, engaging in talks for twenty minutes.

This week, the two countries met at the border village of Pammunjom, and North Korea agreed to send a delegation to Pyeongchang. It will be the first time in eight years the North Koreans have participated in the Olympics.

“The restoration of the communication channels means a lot,” presidential press secretary Yoon Young-chan said in a statement last week. “It is assessed that [we] are headed to setting up a structure through which contacts can be made on a regular basis.”

President Moon has often expressed his unhappiness with Trump’s belligerent rhetoric regarding North Korea and has repeatedly urged inter-Korean peace and reconciliation. While Trump often treats Pyongyang as a threat to U.S. power or safety, it’s South Korea, Guam and Japan that would likely feel the immediate impact of preventive war with North Korea.

South Korea has also served as a more immediate witness to the plight of North Korean citizens, and has a deeper understanding of the likely humanitarian impact of military conflict. South Korea has served as a haven for many North Korean refugees—beleaguered and impoverished citizens who have fled their country in an attempt to begin a new life. South Korea fully appreciates the costs of preventive war, even if some elites in Washington do not. The potential for deepened tensions (if not conflict) with China, for violence and destruction in and with surrounding countries, and for a massive refugee crisis throughout East Asia cannot be understated.

As MIT political science professor and author Barry Posen wrote recently for the New York Times, even a successful American attack on North Korea would give Kim Jong-un “the opportunity to retaliate with conventional forces against unprepared soldiers and civilians in South Korea. In most scenarios, it is all but inevitable that many thousands of civilians, and American and South Korean soldiers, would die.”

Some U.S. officials fear that Kim Jong-un’s recent communication efforts with South Korea are merely a guise in order to buy time and stall sanctions, putting forth a show of docility that enables him to avoid making any real concessions to the United States or South Korea. But the United States and South Korea are both prepared for such a possibility: Our military presence in the Korean Peninsula and surrounding region is substantial. North Korea is an impoverished and weak country. The United States is immensely stronger and more powerful; letting Kim Jong-un goad or frighten us into war would be a perilous mistake—one that could strain or destroy our relationship with South Korea and put us on a dangerous footing with China, which does not want war in the region.

We needn’t fear Kim Jong-un’s posturing or dishonesty—we should trust U.S. power and strength to successfully deter North Korea, just like we deter Russia and China.

In response to the opened channel between North and South Korea last week, Chinese political spokesman Geng Shuang told reporters at a news conference that “China would like to play a constructive and positive role in bringing this situation back to the right track of peaceful settlement, work for the denuclearization of the peninsula and long-term peace and stability on the peninsula.”

Everyone, it seems, wants to cultivate reconciliation—but is that something that President Trump and his top security officials truly want?

In an act of immense hubris, the president tweeted on Thursday that talks between North Korea and South Korea would not be happening at present “if I wasn’t firm, strong and willing to commit our total ‘might’ against the North.” But it seems the opposite may be true: while Kim Jong-un’s language toward South Korea and President Moon was conciliatory in his New Year’s speech, the North Korean leader told the Trump administration that “he had a nuclear button on his desk and that the entire United States was within range of his weapons—but he also vowed not to attack unless threatened.” Meanwhile, some have pointed out the tension Trump’s hard line stance has put on Moon, who must now attempt to foster further talks with North Korea without challenging or undermining his key ally.

Trump’s latest tweets strikingly put the U.S. at odds with South Korea’s willingness to pursue talks and a sustainable political end state with North Korea—even though, as their ally, we are supposed to support and defend them and their interests in the region. Just as alarming, Trump’s insistence on threatening language seems to be urging North Korea to respond in kind, even as the country seems willing to pursue a more peaceful tactic in dealings with their southern neighbor.

The White House should follow South Korea’s lead in regards to North Korea: Instead of constantly employing threats and aggressive rhetoric, matching Kim Jong-un’s belligerence tit for tat, we ought to walk softly and carry a big stick. It’s important that North Korea’s nuclear weapons never become a serious threat to the United States—but this goal is most ably achieved via deterrence and diplomacy, without our political leaders and military risking countless lives in the process. South Korea’s olive branch over the Olympic games fosters a crucial opportunity for negotiations with North Korea in the future. That’s an opportunity Trump and his administration should applaud, not undermine.

As Sen. Tim Kaine (D-VA) wrote Wednesday, “We have seen the painful consequences of unnecessary war, and we risk stumbling into another one if President Trump doesn't get serious about diplomacy with North Korea.” The American people do not want another costly and devastating war—and neither does our ally, South Korea, who would face the guaranteed retaliation following any attempt at a U.S. “military solution.” It’s time for the Trump administration to listen to those they are meant to defend and represent.

Gracy Olmstead is a writer and journalist located outside Washington, DC. In addition to The American Conservative, she has written for The Washington Times, the Idaho Press Tribune, The Federalist and Acculturated. Follow Gracy on Twitter @GracyOlmstead.