America Should Not Overcommit Forces in North Africa 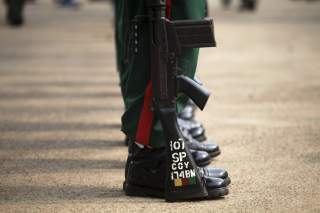 Nearly two months after four American servicemen were killed by terrorists affiliated with the Islamic State in Niger, there is a growing concern among counterterrorism experts that the collapse of ISIS in the Middle East will result in the group shifting its focus to Africa. An area of particular concern is the Sahel, a semi-arid region south of the Sahara spanning from Mauritania and Senegal in the west to Eritrea in the east, and dipping as far south as Nigeria. While the urge for the American military to pursue ISIS into Africa is heavily embedded within the fabric of its counterinsurgency playbook, the United States would be wise in exercising restraint by not committing significant resources towards targeting terrorists in the Sahel. If the United States is concerned with the rise of terrorism in the Sahel and wants to allocate military resources to the region, Washington should instead adopt a strategy designed to positively empower regional allies while eliminating the systemic problems that create the conditions for terrorism to thrive in the first place.

There are a number of factors that make the Sahel particularly ripe for the Islamic State’s brand of terrorism. Countries such as Mali, Niger, Chad, and Nigeria have long suffered from internal ethnic, religious, and tribal fractures that ISIS has previously exploited to its advantage and incite local Muslim populations to violence. Furthermore, the Sahel is littered with Tuareg and Arab militias who have already proven effective in utilizing their ISIS-friendly interpretations of Salafism as a call to arms, and could follow the lead of Boko Haram and other groups in aligning themselves with ISIS. Finally, the Sahel is home to over forty-one-million people under the age of twenty-five who face significant economic hardship which, combined with growing frustrations towards ineffective and corrupt local governments, could motivate them towards radicalization.

These trends suggest that ISIS may be poised to establish a greater foothold in the Sahel, and it seems as though the United States has taken notice. Not only has the United States already stationed nearly 800 military personnel on the ground throughout the region, but Washington has also recently committed $60 million towards the creation of a UN-backed counterterrorism force in the Sahel—even as it proposes $3 billion cuts in humanitarian aid to Africa. Additionally, the United States has active drone bases in Chad and Niger that are dedicated to American counterterror efforts, and has plans to deploy MQ9 Reaper drones in Niger. These efforts were in place before American troops were killed in Niger, and will likely be accelerated in its aftermath. Sen. Lindsay Graham’s recent comments reinforced the push for  expanding the war on terror to new battlefronts, warning that, “we don’t want the next 9/11 to come from Niger.”

Unfortunately, it is unlikely that expanding American counterterror operations in the Sahel will meaningfully reduce the risk of such an attack. As the past sixteen years of the war on terror have illustrated, combating a force as nebulous as “terrorism” is exceptionally difficult, particularly when both the ideology and practitioners of this form of warfare are so easily transferable across international lines. Just as the defeat of Al Qaeda in Iraq saw many of the group’s members transition their allegiance to the Islamic State, the disruption of terror cells in Mali and Libya has seen members of those groups migrate throughout the Sahel and embed themselves within other extremist groups in the region. Defeating ISIS in the Middle East did not stop them from re-emerging in the Sahel, and there is little reason to believe that disrupting ISIS’ operations in Africa will prevent them from successfully migrating elsewhere.

The problem of migration is particularly pronounced in the Sahel. Millions of Africans cross through the region’s porous borders every year, and local governments have proven largely incapable of providing meaningful border security. The Sahel is not only perfectly designed to facilitate the spread of jihadist fighters from east to west, but, should ISIS gain control of the valuable gold and uranium deposits throughout the region, it could also allow the organization to easily funnel the resources it extracts and sell them in exchange for weapons. The United States, which has historically faced great difficulty in combating terrorist groups operating in the borderlands between Afghanistan and Pakistan, would face similar challenges in the Sahel, which would be exacerbated by our well-documented struggles in sharing critical intelligence with regional partners.

Additionally, the problems facing American cooperation with regional allies go far beyond poor intelligence sharing. Soldiers from Mali and Burkina Faso were accused of torturing and executing civilians while conducting counterterror operations, while Nigeria left over 100 civilian casualties after it accidentally bombed a refugee camp it mistook for Boko Haram insurgents. These heavy-handed tactics have been criticized for bolstering extremist organizations instead of disrupting them, and the United States has thus far proven unable or unwilling to effectively corral its regional partners. Despite the multinational coalition of forces that have spent years targeting Boko Haram, the region has seen a marked increase in the number of suicide attacks committed by the group this year.

Most importantly, a significant American military presence is more likely to embed terrorism within the fabric of the Sahel than it is to successfully root it out. Opposition to perceived or literal occupation by a foreign power has historically been a leading driver in terrorist recruitment that can spark both nationalist and religious opposition against the occupier—this principle certainly applies to the Sahel. In its founding statements, Al-Murabitun, an ISIS-affiliated militia operating in Mali and Niger, called for the expulsion of the western imperialists that seek to subjugate Muslim lands and cited the need to attack French interests, “wherever they may be found.” The French presence in Mali, the U.S.-led coalition to topple Muammar el-Qaddafi in Libya and existing American military presence in the continent have all served to drive terrorist recruitment in Africa. Increased American counterterror operations would only exacerbate this trend. This is particularly true in light of recent revelations that American drone strikes have resulted in far more civilian casualties than originally thought, indicating that even a limited military intervention would likely result in blowback as civilian casualties mount.

One possible solution for resolving this occupier’s dilemma involves bombarding terrorists with overwhelming military force to significantly disrupt enemy operations, a strategy which was partially responsible for the initial defeat of Al Qaeda in Iraq. However, such an operation would require a massive, sustained deployment of ground troops to adequately secure such a large region and would certainly come with a lofty price tag—neither of which the war-weary American public would likely accept. Additionally, the rise of ISIS after the departure of American troops from Iraq calls into question the long-term effectiveness of such a strategy, as such a significant military presence does little to dissuade the narrative of America as an occupying army.

If America is interested in limiting the spread of terrorism in the Sahel region, it should instead adopt a strategy aimed at addressing the systemic, structural factors that contribute to the rise of terrorism, while assisting regional partners in doing the same. Instead of cutting economic and development aid, the United States should invest in the economic future of the Sahel by providing financial and humanitarian assistance designed to improve the opportunities of local populations. Combined with a reversal of the trend towards a military-first strategy, such a move could combat the image of the United States as a hostile force while giving disaffected communities a viable alternative to terror groups Additionally, the United States should continue to work with local partners and international organizations to address issues such as corruption and the use of overly aggressive counterterror tactics. America has helped Nigeria and Burkina Faso address deep-seeded issues like government accountability and promoting similar initiatives in the region could increase civic participation among local groups and give them a greater stake in the preservation of an improving status quo.

America’s short-term success in uprooting ISIS in the Middle East may give policymakers and generals in Washington the confidence to pursue the organization as it migrates to Africa—but following these impulses would be a significant mistake. The very conditions that make the Sahel ripe for expansion by ISIS will make it extremely difficult for the United States to achieve a decisive victory. America’s desire to stymie the Islamic State’s spread in Africa is admirable, but a concerted effort to address the conditions that allow terrorism to thrive through economic assistance, humanitarian aid, and civil society development programs is far more likely to produce a positive outcome than the expansion of the war on terror to the Sahel.