America Should Not Play Smallball at the Singapore Summit 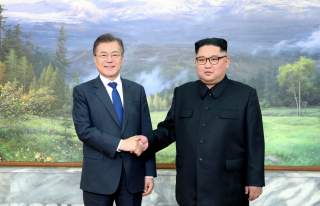 Many in Washington and around the Asia-Pacific would have been substantially relieved had the Singapore summit actually been cancelled. After all, peace talks are complicated and they do not quite fit with the nifty paradigm of accelerating great-power competition within a New Cold War that takes us back to the “good old days” of the early 1980s. Those content with that framework—putting all eggs in the deterrence basket and hoping for the best in the resultant crises and rivalries—may wish to stop reading at this point.

Had the summit been cancelled, then there are indeed many members of the “blob” who could take ownership of this new failure of American diplomacy. On the right, of course, there are those who will not be satisfied until all Communist and/or noncompliant states are either wiped out or at least rendered prostrate. There is the nefarious tendency of leaders on that side of the political spectrum to try to prove that they are more hawkish than the next commentator, leading to a vicious cycle of bellicose blather (e.g. the “Libya model”). To state the obvious, moreover, the untimely dissolution of the JCPOA or “Iran Deal” has hardly inspired confidence that Washington will keep its word on complex international agreements focusing on nuclear proliferation. One might even reasonably wonder if the commander-in-chief, who perhaps very recently seemed to enjoy speculation over whether he might receive a Nobel Peace Prize, was fully briefed regarding the pattern of military exercises scheduled for the Korean Peninsula in the run-up to the planned Singapore Summit. Then, there are the string of right-wing commentators standing by to explain, in the event of failure, why Trump was foolish to ever “give peace a chance” on the Korean Peninsula.

And yet the other side of the political spectrum has also not entirely embraced a Kim-Trump summit either. Many liberal commentators viewed Trump’s agreement to meet with Kim as dangerously naïve and expected that the meeting would confer greater legitimacy on the regime in Pyongyang. Certainly, the Obama administration never seriously entertained that possibility with its aloof strategy of “strategic patience.” Progressive media and scholars have hardly been generating much in the way of creative solutions and proposals to defuse the crisis. Then, there was the “most dangerous” possibility noted by a Brookings scholar that a deal over denuclearization could result in the reform of the U.S.-ROK Alliance or even a reduction of the U.S. troops based on the peninsula.

Actually, when it was revealed in early May that President Donald Trump ordered the U.S. Defense Department to consider reductions to U.S. forces based in South Korea, the reaction of the “blob” was swift. The New York Times reported: “The directive has rattled officials at the Pentagon and other agencies, who worry that any reduction could weaken the American alliance with South Korea and raise fears in neighboring Japan.” While the “carrots” discussion—what little has taken place to date—tended to focus on economic incentives and future investment opportunities, that approach may have been somewhat misguided (likely by mirror-imaging) and ignored basic psychological factors in Kim Jong-un’s calculations. He does not wish to be viewed as a pathetic supplicant asking for food, energy and infrastructure handouts. Rather, the focus, at least at this initial stage, should have been on according the North Korean leader some substantial prestige benefits, as well as pointing out pragmatic approaches that urgently avoid humiliation to accomplish denuclearization and verification.

Even as the tireless advocates for the status quo ROK-U.S. alliance will howl mightily, let us consider the possible upsides of a moderate U.S. troop withdrawal from South Korea and how that incentive could refocus negotiations on the goal of North Korean denuclearization. Yes, there are many upsides, even if they were left wholly unexplored in the New York Times article cited above. Let’s momentarily put aside the fact that U.S. soldiers are asked to serve so far from home and their families for the most part; that they could train more effectively on much larger and less restrictive ranges in the United States; and then there is that rather unnerving fact that their bases (e.g. Osan) in South Korea would likely be the very first targets of North Korean missiles (which might well be nuclear-armed). We will discuss these potential benefits and some others too below, but the main reason to consider a substantial (but not total) U.S. withdrawal from the Korean Peninsula is so blindingly obvious (though rarely discussed overtly) that it should be put in flashing lights: Kim Jong-un is not likely to genuinely undertake denuclearization unless he perceives that North Korea will be substantially better off. In other words, there has to be a fat and juicy carrot for Pyongyang in any future negotiation in place of vague security assurances or nebulous promises of “prosperity.” And the main benefit to North Korean security of this particular carrot would emphatically not be that it alters the military situation as it really would not, but that it simply would offer Kim a way to “save face” and “claim victory.” After all, if Washington continuously plays small ball in these negotiations (as it has in times past) and makes them all about verification procedures and timelines, then a perilous breakdown in the near future is all but inevitable.

Over the course of many columns in this Dragon Eye series, I have tried to demonstrate that China can play a very significant and positive role in denuclearization discussions and resolution frameworks. Beijing could obviously turn the economic screws on Pyongyang tighter or looser with major impacts depending on DPRK adherence to a prospective negotiated agreement. China can additionally offer crucial verification expertise and capabilities, as well as the potential to extend enhanced security guarantees that ease the security dilemma on the Korean Peninsula. The prospect of thousands of IAEA inspectors crawling around caves in the North Korean countryside may well have spooked the Pyongyang security elite as they began to consider the possibilities over the last few weeks. A rather more realistic plan might be organized by Beijing with most of the inspectors themselves consisting of Chinese (and Russian) arms control experts. Likewise, the scenario in which Pyongyang was to dismantle its missile, TELs, and warheads, placing them meticulously on American ships seemed bizarre and whimsical even before the tumult over the last weeks. However, the idea of rolling these sensitive items (in stages of course) into large storage warehouses just over the Yalu on Chinese territory to be jointly monitored by North Korean and Chinese personnel could still garner support in Pyongyang possibly. Meanwhile, a sweetener of perhaps a few battalions of new Chinese T-96 tanks (polished up for the parade ground naturally enough and given as a gift from China to the DPRK) could flow south to join Kim’s rather beleaguered conventional forces as compensation for Pyongyang’s step-by-step denuclearization. Indeed, such solutions “with Chinese characteristics” should be fully explored as a possible remedy to the vast gulf that has seemed to separate the United States and North Korean negotiating teams in the run up to a potentially history-making summit.

The main contribution of this Dragon Eye series is to garner insights from Chinese-language sources, such as monitoring Chinese-language coverage of the Xi-Kim summits. In keeping with that tradition, let us underscore the gravity of the upcoming talks by returning very briefly to that frigid and ominous winter of 1950–51. That moment in history is completely pivotal to the contemporary PRC and also the evolving PLA. No wonder almost every issue of the Chinese military journal Military History [军事历史] has one or two articles at least on the “War to Resist America and Aid North Korea [抗美援朝].” A mid-2017 article, for instance, by a researcher from the Chinese Military Academy of Sciences explores the impact of the “geographic factor [地理因素]” on the Korean War. Korean geography is generally mountainous, but with significant variation and suggests the conditions are summarized by the curt phrase that “the north is high, the south is low, while the east is high and the west is low [北高南低东高西低].” It is explained that the PLA used this geography to its advantage during the early phase of the Chinese intervention, since “mountainous areas are not conducive to the use of mechanized military operations, but rather appropriate for more flexible infantry for attack and defense combat [山区不利于机械化军队行动便于灵活的步兵进行地面攻防作战].” It is further explained that the exceedingly mountainous terrain of northern Korea enabled the success of initial Chinese attacks since the UN forces were isolated and could not support one another effectively.

Still, this rendering also relates significant problems encountered by the PLA due to Korea’s geography. Most fundamentally, the analysis emphasizes that since “the Korean Peninsula is surrounded by sea areas on three sides, this was advantageous for the UN forces with their naval and air forces [三面环海利于联合国军海空优势].” Indeed, China’s “paucity of naval and airpower meant that the ability of the PLA volunteers to control their flanks was dangerously weak [由于缺乏海空力量志愿军作战空间的两翼控制能力级弱].” The piece describes Chinese advances that outran their supply lines, as well as the “significant role of frostbite in thinning the ranks [冻伤减员严重]” of the PLA contingent in Korea. The challenging geography made coordination difficult among far-flung Chinese units and this analysis relates that Chinese soldiers were outgunned by superior U.S. artillery and also tanks in the less mountainous western area of military operations. The piece relates with evident pride how PLA soldiers learned to survive in the face of ominous American firepower by digging foxholes that were .8 meters wide and more than one meter in depth. Likewise, the PLA began to develop anti-tank tactics and it is asserted that during a three day period in October 1951 that the PLA destroyed eighteen U.S. tanks and damaged eight more. No doubt, the war proved useful for honing Chinese military “innovation and . . . combat command skills [创造性 . . . 战争领导艺术]. Indeed, the PLA’s contemporary prowess in logistics, engineering, winter warfare and air defense is most likely directly attributable to lessons learned in the Korean War. The strong contemporary focus on developing air and naval forces could also be partly attributable to this initial and bloody “trial by fire” in Korea.