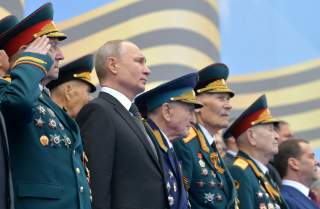 Next year marks the seventy-fifth anniversary of the victory over the Nazi Germany. While meeting young Americans during various events in universities and seminars, I noticed that they not only remember this fast approaching date, but they also discussed how to use the historical experience to overcome current tensions and enhance Russia-U.S. relations.

Overall, the new generation in the United States knows that Soviet and American soldiers and officers were brothers-in-arms during World War II, that it was the Red Army that made the decisive contribution to the defeat of the Nazi hordes. On our part, we recount that Russia values the allied contribution and remembers hundreds of thousands of fallen Americans.

There are many places in the United States that remind us about our fight against the Nazis. During my recent visit to Alaska in June, I was honored to attend a consecration ceremony of new tombstones placed at the graves of the Soviet pilots in Anchorage. Russian embassy diplomats paid tribute to the Soviet, American, British and Canadian soldiers resting together. Those pilots ferried planes much needed by the Red Army over the most dangerous route—from Alaska to Siberia. Together with the Mayor of Fairbanks we laid a wreath to a great but yet the only memorial in the United States dedicated to our alliance. We hope that one day a monument to heroic pilots will be erected on the East Coast—in Elizabeth City, North Carolina—as well. That was the place, from which American flying boats with mixed crews began their flight to the USSR.

Every year on April 25—the day of the encounter between the Soviet and American troops in Germany in the victorious year of 1945—a heartwarming ceremony takes place at Arlington National Cemetery. Diplomats from the Commonwealth of Independent States’ embassies and their American colleagues from the State Department lay wreaths at the “Spirit of the Elbe” memorial sign. Words of gratitude go out to honor the present veterans—the true winners of the war. This day is solemnly celebrated in Moscow as well.

Another remarkable tradition which is gaining momentum is the “Immortal Regiment” march, timed to the Victory (in Europe) Day on May 9. Descendants of the Red Army soldiers who live in the United States walk through the streets of American cities with portraits of their fathers and grandfathers. They proudly remember those who did not spare themselves in the fight against the brown plague and conquered it. It is peculiar that every year more and more Americans join the marches.

We cannot but remember the victims of the bloodiest war in the entire human history. It claimed the lives of twenty-seven million people in the Soviet Union alone. In memory of the fallen, our compatriots in the United States, together with concerned U.S. citizens are holding the “Candle of Memory” ceremony on June 22, which is the day that the Great Patriotic War broke out.

Russia has always reacted strongly to attempts to rewrite history and glorify Nazism and will continue to do so. The Russian Foreign Ministry has prepared a report on the global situation in the area of fighting the glorification of Nazism. In the twenty-first century, such a shameful phenomenon, such as marches of Nazis and their collaborators on the streets of European cities, cannot be allowed to exist. It is important to stop the demolition of monuments dedicated to anti-fascist warriors in Ukraine, the Baltic countries and Poland. The policy of tolerance towards neo-Nazis is unacceptable.

It is deeply disappointing that neo-Nazi organizations “hiding” behind the First Amendment in the United States freely operate and erect monuments to “heroes” of ethnic cleansings, Nazi collaborators involved in the Holocaust (Roman Shukhevych , Stephen Bandera, Adolfas Ramanauskas and so forth).

Every year Russia submits a United Nations resolution on the fight against the glorification of Nazism, neo-Nazism and other practices that contribute to the escalation of contemporary forms of racism, racial discrimination, xenophobia and related intolerance. In the entire international community there are only two countries that still vote against it—the United States and Ukraine. Canada found strength to reconsider its position, now it is Washington’s turn.

Shared history should play a unifying role. We should never forget what our peoples fought together for during World War II, the memory of the victims of Nazism should forever stay in the hearts and minds of future generations. We will be happy to celebrate the seventy-fifth anniversary of the Victory on May 9, 2020, together with the Americans. The Russian president Vladimir Putin invited President Donald Trump to Moscow to celebrate this festive event.

In the face of the common threat the Soviet Union and the United States, states with different social systems, were able to forget about political differences. In the anti-Hitler coalition we were united by an enemy that posed a threat to the entire world. There are no ideological contradictions between us anymore. But there are new global challenges, the historical experience of alliance and a responsibility to all mankind.