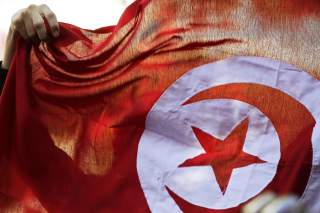 As America prepares to celebrate the anniversary of its independence, escalating fears surrounding potential armed conflict with Iran—along with ongoing conflicts in Libya, Yemen, and Syria—have dominated recent headlines. But there’s another country in the Middle East and North Africa that not only provides a sharp contrast to such negative current events, but also shares a set of common democratic values with the United States: Tunisia. While former Tunisian president Zine El Abidine Ben Ali may not have ruled his country as egregiously as King George III treated the American colonies, many of his abuses would sound familiar to our revolutionary ancestors. Ben Ali, like George III, prevented democratic elections and interfered with the judiciary, and neither the Tunisian despot nor the British king enjoyed the “consent of the governed.”

It has been eight years since massive demonstrations caused Ben Ali to flee the country. By happy coincidence, the U.S.-Tunisia Strategic Dialogue was scheduled to take place on July 2, the same date that the Continental Congress declared independence from Britain.  The session has been postponed due to the June 28 bombings in Tunis and the hospitalization the same day of the country's president, who will turn 93 in November.  But the United States can honor the ideals of our Founders by supporting the Tunisian transition, and Secretary of State Mike Pompeo can help ensure the success of the rescheduled dialogue, by announcing several concrete initiatives.

When I concluded my tour as the U.S. ambassador to Tunisia in 2012, we judged that the country’s transition toward more inclusive political and economic systems depended on progress in two specific areas: security and job creation. The following three years were marred by acts of political violence, culminating in 2015 when terrorists murdered dozens of foreign tourists at the Bardo Museum in March and at a beach hotel in June. Notwithstanding the June 28 bombings, the security situation in Tunisia has improved significantly, in large part because of robust U.S. security assistance. American military support increased from $12 million in 2012 to $119 million in 2017. As the current U.S. ambassador to Tunisia, Don Blome, said recently, “Tunisia has come a long way in ensuring the safety of its citizens, and the U.S. will remain a steadfast partner in this endeavor.” Tunisia is a major non-NATO ally and Secretary Pompeo should use the Strategic Dialogue to reiterate the U.S. commitment to Tunisian security by announcing that the administration’s next budget request will include healthy levels of funding for Tunisia’s military.

As the Trump administration focuses its efforts to enhance prosperity to boost chances for peace between Israelis and Palestinians, it should also look to reinforce bilateral economic cooperation with Tunisia, a country whose economic challenges contain the seeds of opportunity for progress. Unemployment and uneven economic development were among the primary drivers of the Tunisian revolution, and the unemployment rate remains stubbornly high at 15 percent, according to World Bank statistics. If the administration wants to both expand opportunities for U.S. businesses and promote development within Tunisia, Secretary Pompeo should announce that the United States is willing to initiate negotiations for a bilateral Free Trade Agreement.

According to the Office of the U.S. Trade Representative, two-way trade in goods reached $1.2 billion in 2018—more than three times the level it was back in 2000. A bilateral Trade and Investment Framework Agreement was signed in 2002, and negotiations for a Free Trade Agreement represent the logical next step in the economic relationship between our two countries.

As Russian interference in the U.S. elections in 2016 makes painfully clear, challenges confront democracies in the United States, Tunisia, and elsewhere. Tunisia has seen peaceful transitions of power following free and fair national elections in 2011 and 2014; its Freedom House status is “free.” Parliamentary elections are scheduled for October 6, 2019, and presidential elections for November 17, 2019. At the Strategic Dialogue, Secretary Pompeo should underscore that the United States will help support these elections (just as it did in 2011 and 2014) through democracy and governance grants to expert non-governmental organizations such as the National Democratic Institute and the International Republican Institute. Secretary Pompeo should also announce that President Donald Trump will invite the newly-elected Tunisian president to Washington in early 2020. Doing so would send an important signal—not just to Tunisia, but to the people of North Africa, the Middle East, and beyond—of U.S. confidence in the democratic process.

Tunisia may not be the largest, most powerful, or richest country in Africa or the Middle East, but America has a strong interest in ensuring its continued success as it completes its transition from decades of authoritarian rule to an inclusive democratic system. A lack of economic opportunity in the region and a civil war in neighboring Libya have led to a sustained increase in refugees seeking to reach Europe; many seek to do so via Tunisia, which has a longer Mediterranean coastline than France. The United States can do its part to help protect the southern flank of NATO by continuing its efforts to provide Tunisia with security assistance and to help economic investment and job creation.

On a visit to Tunisia soon after the revolution, Sen. John McCain astutely observed to me that “if it can’t succeed here, it can’t succeed anywhere.” The measures I have proposed do not entail large expenditures of taxpayer funds and would promote U.S. security and commercial interests. Most importantly, U.S. support for the Tunisian revolution is a natural application of the principles our Founders articulated so eloquently in the Declaration of Independence.

Gordon Gray is the chief operating officer at the Center for American Progress. He was a career foreign service officer and served as U.S. ambassador to Tunisia at the start of the Arab Spring, and as Deputy Assistant Secretary of State for Near Eastern Affairs.