America Shouldn’t Turn Its Back on Afghan Civilians 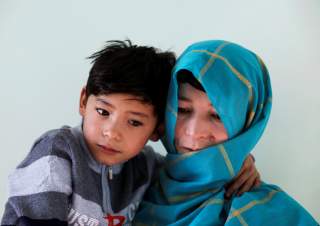 Light is finally appearing at the end of an eighteen-year-long tunnel, as there are reports that the Afghanistan war, or at least the United States’ involvement in it, could soon come to an end. U.S. envoy Zalmay Khalilzad has said that a peace deal has been agreed to in principle between America and the Taliban. In exchange for a full pullout of American troops, the Taliban has pledged to not allow Afghanistan to become a safe haven for terrorist operators. But any peace process is long and cumbersome and could fall apart for a myriad of reasons. This one is no different.

The United States is insistent that any finalized deal include face-to-face talks between the Taliban and the current Afghan government, which the Taliban has thus far refused to do. If these talks fail, America should still proceed with an exit plan. President Donald Trump is reportedly ordering the Pentagon to move ahead with a 50 percent troop reduction, as the first step of an eventual full withdrawal. This is the right decision—America hasn’t been able to fix Afghanistan in seventeen years, and there’s no reason to believe that will change. But there are significant concerns about an Afghanistan without U.S. support that can’t be swept under the rug: the fate of civilian Afghans, particularly women, under a new era of possible Taliban rule. The answer is to let them come to America.

There is plenty of reason to be skeptical of this new round of negotiations between the United States and the Taliban. Leaked reports indicate that America is pushing for an interim government that includes representation for the Taliban, but Afghan President Ashraf Ghani has repeatedly rejected that idea. “Afghans do not accept an interim government—not today, not tomorrow, not in a hundred years,” he said.

Given this conflict of vision, there is a risk that Afghanistan will once again be subject to the terror of Taliban governance. The current Afghan government and its security forces are incredibly weak. Their military boasts an annual desertion rate of 30 percent. By contrast, the Taliban has proven themselves resilient—not strong enough to win outright but strong enough to not lose. But this is in the context of American and North Atlantic Treaty Organization support for the Afghan regime. Take that away, as President Trump seems willing to do, and the government would in all likelihood crumble with the Taliban stepping into its place.

This means a possible return to the horrible social conditions on the 1990s, where women were flogged, tortured, or executed (often in public) for crimes such as wearing nail varnish, running an informal school out of the home, or fleeing domestic abuse. The U.S. military can’t stay in Afghanistan forever, so we need to provide accessible exit options for those who would wish to leave.

America played a big part in the destabilization that allowed the Taliban to emerge in the first place. During the Cold War, the U.S. funneled money and weapons into Afghanistan in the 1980s to the anti-Soviet mujahidin. When the Soviet Union finally pulled out in 1989, the regime it had previously propped up dissolved and the country devolved into a civil war between the mujahidin and remnants of the old regime army.

These factions fought and destroyed their country with many weapons paid for and provided by the United States, who had washed their hands of the country after the Soviets left. It was in this atmosphere that the Taliban emerged, with support from Pakistan, combating the rampant warlordism, believing their ultraconservative strain of Islam was an antidote to the disorder.

Now, America has spent the previous two decades leveling this country only to most likely hand it back over to this same group of repressive, religious zealots. Because America helped create the conditions that led to their rise in the first place, Americans owe the Afghan people other options—in the form of resettlement programs to the United States.

Some will object to the cost of admitting refugees. In 2014, the United States spent $1.1 billion on refugee resettlement, at an average of roughly $15,000 per person. That would mean a hypothetical five million Afghan refugees would cost around $75 billion. Yet America has spent more than a trillion dollars overall in Afghanistan and wasted hundreds of millions on failed reconstruction projects. At the high point of the war from 2010-2012, the United States was spending more than $100 billion a year. We can make room for refugees in the budget.

The United States should still militarily withdraw from Afghanistan, but Washington shouldn’t turn its back on its civilians as America did in the early 1990s. There is no perfect substitute for being allowed to live peacefully in your homeland, but multiple countries have made that impossible for Afghanistan.

If and when the United States retreats from Afghanistan, America should bring any willing Afghan family along with it. Most would likely not come. But for those that would, the least the United States can offer after the previous four decades of war and extraordinary discord is a shot at an ordinary, peaceful life.