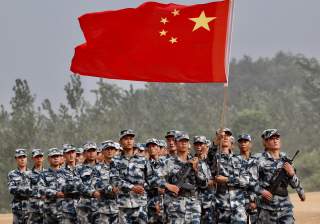 The United States can afford to ignore Venezuela, as long as there’s no direct Chinese interference. Any Chinese involvement would change the calculus, and policymakers should be ready for that contingency.

All warfare, Sun Tzu wrote, is based on deception. He wrote: “When we are able to attack, we must seem unable; when using our forces, we must appear inactive; when we are near, we must make the enemy believe we are far away.” Deception has been a defining policy of Chinese leadership ever since Mao occupied Tibet and went to war with India in 1962, as the world was busy with the Cuban missile crisis. Beijing’s preference for deception continued with Deng Xiaoping’s policy of biding time, becoming a member of the World Trade Organization and increasing China’s manufacturing base, at the expense of other Western powers. This includes salami slicing of South China Sea and buying up much of Africa. Regardless of token platitude towards a cliched Marxist-Leninist internationalist future, Chinese grand strategy and foreign-policy decisionmaking had always been remarkably feudal, hierarchical and nationalist.

In light of that, the curious recent visit of Venezuelan autocrat Nicholas Maduro to request for Chinese help is of immense geopolitical significance—a development that got lost amidst the news cycle. Maduro met with Chinese President Xi Jinping and Premier Li Keqiang and requested help for his oil-rich but cash poor and inflation-ravaged country. In turn, the Chinese side, which is at this current point of time one of Venezuela’s biggest creditor, said that China is ready to help Venezuela and provide whatever Beijing can offer as a means of support. Maduro’s sudden lurch and dash to Beijing naturally raised eyebrows, as he asked for a new loan of five billion dollars, as well as an extension of credit lines and grace periods. China remains one of the largest creditors of Venezuela with over fifty billion dollars handed over for a decade, a lot of which remains to be repaid. Moreover, it is unlikely Venezuela is going to pay China back anytime soon, which means, in all practicality, Venezuela remains in debt of China.

What is behind this sudden drive towards Beijing? Venezuela—traditionally mismanaged, centralized and corrupt despite massive oil resources—is now suffering from a terrible credit crunch and inflation. One can imagine the primary motive of Venezuela’s rush to China would be economic. After all, Venezuela needs Chinese help and Chinese money. With the vast ongoing recession, Maduro was forced to take radical measures, like increasing a new currency and minimum wage by 3000 percent, but the recent data from IMF suggests that Venezuela will remain in debt and inflation and it will only increase. Given that scenario, Maduro is selling 9.9 stakes of the Sinovensa joint venture, as reported by Reuters, where China National Petroleum Corporation already has a 40 percent share, to China. The Venezuelan people, on the other hand, are starving and eating rotten animals, with refugees flocking to neighboring countries.

But economics isn’t the only issue. There’s a deeper geostrategic consideration for reaching out to China. Venezuela is on the brink, and Maduro fears a U.S. intervention, and a Chinese presence in any form will be an instant deterrence and will be considered a balancing move. Only recently, there have been reports in CNN of all places that some segments of the Venezuelan armed forces were in talks with the American government to replace Maduro. The authenticity of the report is, of course, debatable, but if it is true, it is an interesting development for a region which is used to look at the United States from a cold war lens of interference and coups.

Likewise, President Luis Almagro of the Organization of American States warned that due to the severe strain on the finances of the neighboring countries, the chances of a joint military intervention is not out of the question. “With respect to a military intervention to overthrow Nicolas Maduro’s regime, I don’t think any option should be ruled out,” Almagro was quoted to have said, in perhaps the first ever direct threat of an intervention in the troubled South American nation. Previously, Republican Sen. Marco Rubio favored an intervention, so has a Venezuelan-born Harvard professor and liberal pundits in the pages of Foreign Policy. This current dash to China, frantically looking for an ally and support is, therefore, a calculated move by Maduro. Venezuela always relied on Cuba for mutually assured military support. However, with the steady collapse of the economy in both the countries, that is now unfeasible. Hence, China. Chinese investment, Chinese presence, Chinese assets, and if possible, Chinese military deterrence is, therefore, the ultimate geopolitical gamble in Latin America. With Trump poised to ratchet up the ongoing trade war, Chinese investment in Latin American oil would mean an offset of Beijing's losses from Iran sanctions and embargo. Additionally, Venezuelan oil would provide relief to an energy and resource hungry Chinese economy, all the while attempting to balance the United States militarily. Balancing America is the primary intention of Beijing as tensions continue to grow between the two great power rivals.

The prospect of military intervention in Venezuela is, however, complicated and risky, and conservatives are instinctively opposed to it, after the last seventeen years of war in the Middle East. The invasion itself wouldn’t be possible without the active and tacit support of Venezuela’s neighboring countries, some of who remain skeptical of American interference. There is no question that the American military can bring about a regime change in Venezuela in no time. However, the history of regime changes in the middle east should give Washington pause.

There is no end game, timetable, or direct geostrategic interest in Venezuela. And the number of refugees who will flock to the United States will make the European migration crisis look like an evening stroll in a small-town park in comparison, as there would be no way to judge on the Mexican-American border who is a Venezuelan and who is not. As for strategic resources, Venezuelan oil isn’t a primary American consideration, nor is Venezuela a growing military threat. There is a valid humanitarian concern, but the American public overwhelmingly opposes any further military adventurism for humanitarian purposes, paid by American blood and treasure. Part of the reason for Bernie Sander’s appeal, as well as Donald Trump’s win, was because both the candidates opposed the mainstream foreign-policy idea of humanitarian interventionism, nation-building, and spending taxpayers’ money on “foolish wars.”

But what if tomorrow there’s a scenario where China owns most of Venezuela’s resources and Venezuela effectively turns to a Chinese platform in Latin America? Evidence so far suggests China is trying to take a more balanced and prudent approach, without rocking the boat too much. For instance, Beijing’s guarantees were not explicit, and there’s no signal that China is willing to militarily protect any Latin American country in a region which is frankly not in any direct geostrategic interest of Beijing. But Beijing’s continuous economic investment in Venezuela however, is a possible win-win for China’s economy and geostrategy.

It will also change the calculation of American policymakers.

America can afford to hope or work for a coup with like-minded Venezuelan partners in the military. Washington could also back regional powers who decide to intervene, or even simply look away as Venezuela and other Latin American leftist regimes burn due to their own inadequate policies, as long as they don’t pose any direct geostrategic threat. But whenever a great foreign power hovers around, it is a new national-security calculus and is in contradiction to traditional American strategy of regional hegemony since the time of the Monroe Doctrine. It is perhaps too early, but American policymakers should keep the China threat in mind.

Sumantra Maitra is a doctoral researcher at the University of Nottingham, UK. His research is in great power politics and Neorealism. You can find him on Twitter @MrMaitra.