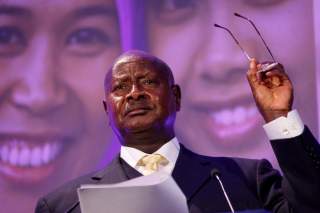 The United States has a dilemma in dealing with a certain category of elected governments. These are those countries in which leaders essentially seek to mutate the democracy that made them president to a one-man show, using subsequent elections to pursue something resembling presidency for life. (And to date, it is indeed a man problem; I don't know of any cases yet involving women.)

The dilemma is most serious in Central Africa today—acutely in the Democratic Republic of Congo, where two-term president Joseph Kabila is seeking to delay elections that would require him, due to constitutional stipulations that preclude a third consecutive presidential term, to step down. Although the DRC ambassador to the United States just denied it in a public event at the Brookings Institution on August 15, suspicions abound that President Kabila seeks to change the constitution to allow at least three consecutive terms.

Analogous approaches have been taken by President Yoweri Museveni in Uganda, President Paul Kagame in Rwanda and President Pierre Nkurunziza in Burundi. Vladimir Putin acted similarly in Russia, stepping down from the presidency in 2008 after two terms—but then taking advantage of the fact that the Russian constitution only places restrictions on consecutive terms to run again in 2012. By modifying the constitution, he then created the possibility of staying in office until the middle of the next decade. Watching all of this with great interest, quite likely, is Hamid Karzai of Afghanistan, who stepped down after the equivalent of 2.5 terms in 2014, as the Constitution of Afghanistan required, but who is suspected of wanting to encourage a revision to that constitution that would allow him to run again in 2019. Other leaders, like President Robert Mugabe of Zimbabwe, use the facade of elections that everyone knows to be rigged to preserve a virtually endless hold on power—but the problem is serious even in less egregious cases. The conundrum is most serious in presidential systems; it is not clear that similar term limits are required on prime ministers in parliamentary systems.

What to do in these situations? Today, the United States struggles to make policy on a case-by-case basis. In some ways, that is natural. There is, after all, a huge difference between a Kagame who saves his country from genocide and inherits a broken society, and a Putin or a Nkurunziza. Similarly, Museveni has been a reasonably effective leader of Uganda—far, far better than his predecessors Idi Amin and Milton Obote—but now that he has reached thirty years in office, the notion of calling him a democratically elected leader is becoming farcical.

The United States cannot tolerate an attitude among such leaders of “l’etat, c’est moi.” Usually, when presidents conflate their countries' best interests with their own indefinite holds on power, the quality of governance declines. Inevitably, the succession question then becomes far more problematic, since at some point even these leaders will die (whether they admit it or not). The United States’ special envoy for the Great Lakes region of Africa, Thomas Perriello, recently summarized a study done for his office estimating the chances of instability as being five times greater when presidents try to hang on unnaturally long, relative to other countries.

Democracy, to be robust, requires protection of minority and individual rights, a free press and vigorous civil society, competitive political parties or other organizations, as well as checks and balances on the use of state power. Few elected presidents in their third terms in office, and virtually none in their fourth or fifth, have in the history of the modern world managed to strengthen their country's democracy throughout their tenure in office.

We Americans understand the temptation to keep a strong leader in office during a period of national crisis, because we voted for Franklin Delano Roosevelt four times during the Great Depression and World War II. Many of the above leaders will argue, sometimes with partial validity, that their countries have faced periods of comparable peril before or during their rule. But the FDR experience taught us a valuable lesson about avoiding dependence on one person, and the Twenty-Second Amendment to the U.S. Constitution resulted shortly after FDR’s death.

Admittedly, circumstances matter, and they vary from country to country. And, admittedly, there are worse forms of government in the world than some three-term presidencies. As such, any comprehensive U.S. policy for promoting term limits abroad requires a certain degree of flexibility. But it should not be based on case-by-case improvisation. That approach produces little leverage at the crucial moment when leaders are contemplating whether to attempt a third, or fourth, or fifth or sixth term. In short, the world needs a stronger norm in favor of a strict adherence to a two-term lifetime presidential limit, and at a minimum a two-consecutive-term limit. Exceptions to this norm should be very rare.

A clear doctrine will not automatically produce the results we seek, of course. A certain class of leaders will always seek to maximize individual power, viewing democratic constraints and norms as obstacles to be overcome rather than as judicious standards of proper behavior. Moreover, the tools at our disposal to pressure would-be autocrats to respect democracy will often provide limited impact on their decision calculus; it would hardly make sense to use force or even extreme economic pressure to give teeth to this policy.

But it does seem very reasonable to consider passing a U.S. law that would deny any country in which a president seeks a third term, or certainly a fourth, most forms of American economic assistance. Most-favored-nation trading status might also be brought into play; countries with such rights could have them suspended in the event of electoral misbehavior. Waivers could of course be allowed on national-security grounds, but the expectation should be that any president seeking a third straight term abroad should not count on business as usual with America. Some kinds of sanctions authorities are already in place, such as those being applied now against certain individuals in the DRC suspected of deliberately delaying or otherwise obfuscating the scheduled 2016 elections, but these existing authorities do not go far enough.

If such rules were already in effect, President Kabila in the DRC would know that any protracted delay in elections would likely cause a cutoff in U.S. aid; perhaps other donor nations would follow suit. A clear marker would be established for President Karzai in Afghanistan as well, yet without the downsides of personalizing the issue in a way that might antagonize him and increase the odds of his seeking a third term. Paul Kagame would know that, once this term in office ends, it could be time to think about a much-deserved retirement (for now, the waiver might be invoked to grant a graceful transition). Other leaders would see lines in the sand, even if not red lines, drawn more clearly as well.

For an American foreign-policy establishment struggling with how to promote democracy in a difficult era, this new policy could provide a paradigm for a specific, yet quite important, category of cases.