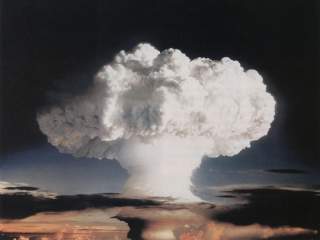 In recent weeks, nuclear abolitionists have taken to the pages of the nation’s newspapers and online publications in a concerted effort to shape President Obama’s nuclear agenda during his last year in office. These critics of modernization challenge the utility of all efforts to build new delivery systems or modernize nuclear weapons. The problem with their arguments, however, is that they begin with a number of foundational assumptions that are false.

While it is tempting to address the specific assertions they make in their efforts to encourage President Obama to cancel the U.S. Air Force’s replacement nuclear cruise missile (LRSO), their attempts to cancel the Air Force’s replacement intercontinental ballistic missile (GBSD) or their criticism of the long-range strike bomber, that is not the focus of this article. Previous articles have explained why the LRSO and the GBSD are important.

Instead, my concern is the more foundational assumptions that underlie the majority of arguments made by abolitionists.

When Obama delivered his historic Hradcany Square on April 5, 2009, in which he laid out his vision for a nuclear weapons free world, the president said,

“So today, I state clearly and with conviction America’s commitment to seek the peace and security of a world without nuclear weapons. I’m not naive. This goal will not be reached quickly—perhaps not in my lifetime. It will take patience and persistence. But now we, too, must ignore the voices who tell us that the world cannot change. We have to insist, ‘Yes, we can.’”

Unfortunately, the strategic environment changed dramatically in the following years.

The largely benign security environment, posing no real threats to American sovereignty, made it possible for the United States to dramatically reduce the size of its arsenal all while fighting violent Islamic fundamentalists. In recent years, however, a resurgent Russia decided to reestablish its control over its “near abroad,” which involved a dramatic modernization of the Russian nuclear force—including delivery systems and warheads. China also grew increasingly assertive in the South and East China Seas, while building, for the first time, an effective nuclear triad.

Such developments are leaving many defense and security analysts to wonder if we are now entering a post-post–Cold War world.

This rather dramatic deterioration in the geostrategic security environment has not, however, deterred nuclear abolitionists from keeping up a steady drumbeat for eliminating the intercontinental ballistic missile (ICBM) force, cancelling the long-range standoff missile (LRSO) and further reducing the size and capability of America’s nuclear arsenal. One might wonder if these specific objections culminate in a broader strategy to eliminate our deterrent. Such a strategy would rely on the good intentions of the Russians and Chinese.

In article after article, former government officials who supported the nation’s nuclear programs during the Cold War are now calling for an American arsenal that is smaller and less capable than at any point in the last sixty years.

One of the most fundamental arguments advanced by abolitionists is the notion that the military seeks to modernize the nuclear triad because military leaders are stuck in a “Cold War mindset.” This assertion is somewhat strange, given that one abolitionist recently remarked that the military lacks Cold War experience. Assuming it is not possible to have it both ways, this argument is invalid.

Considering that the United States has spent the last fifteen years reducing the size of the nuclear arsenal and the influence of the people within it, all while the nation turned to fighting violent Islamic fundamentalism, arguing that the military is trapped in a Cold War mindset is a stretch. If the Air Force and Navy were surveyed today, you would find a service with far greater experience in the Middle East than in nuclear operations. This was not so during the Cold War. Both services then clearly understood the dynamics of nuclear conflict.

To underscore this point, it is worth noting that less than one percent of today’s military was in uniform when the Soviet Union collapsed. Our modern military personnel have little Cold War experience and cannot be stuck in a mindset they never experienced. And because of the rapid rise of violent Islamic fundamentalism, there was little opportunity for a Cold War hangover to influence the thinking of the current force.

Abolitionists also argue that deterrence can be maintained with a smaller and less capable force, but such arguments rarely offer any rigorous analysis to support them. In reality, the military employs a rather complex system to determine required warfighting capabilities. If credibility equals capability plus will, we should not be surprised that the Air Force and Navy think about actually employing nuclear weapons rather than keeping them on the shelf and assuming that will be sufficient for deterrence.

To determine the capabilities required to both maintain effective deterrence and defeat an adversary should deterrence fail, the military uses a combination of exercises, experiments and war games. Exercises examine today’s capabilities and are focused on effectively employing what we have, building proficiency and gaining operational experience. Global Thunder is one example of such an exercise. Here, current forces practice operating in a given scenario, all while identifying areas that need improvement.

Experiments determine near-term capabilities and explore the feasibility of what we could do—what is practical and of value. Many of the weapons systems in the arsenal today started out as experiments with the goal of determining the realm of the possible. Experiments are also important because they help the military think through the effects of a possible capability and determine whether it should be developed and brought into the arsenal—and what we must do should an adversary develop such a weapon.

Meanwhile, war games look to the mid and far-term, and seek to examine what might be—that is, exploring the possible. They seek to understand the conceptual value of capabilities and approaches to defeating an adversary. While they are an approximation of a future reality, they are imperfect in their ability to predict the future. They do, however, follow Winston Churchill’s famous admonishment, “Gentlemen, we have run out of money; now we have to think.” Perhaps the best historical example of the role war games can play in building for the future is drawn from the Naval War College’s pre–World War II war games, which played an important role in preparing the U.S. Navy for its war against the Japanese in the Pacific.

Over the past decade, the Navy, Air Force and U.S. Strategic Command have conducted a series of war games known as the DEGRE and Strategic Vigilance games. These war games are held on an annual and biannual basis, respectively, and utilize scenarios that look into the future and pair current or expected American nuclear and conventional forces against possible adversaries. Experts from across the political and warfighting spectrum are brought in from the military, intelligence agencies and policy making community to play the blue and red teams.

The validated outcomes of these war games are then fed into the larger planning system as a way of informing decision makers of the possible strengths and weaknesses of American capabilities. While the results of these war games are classified, it is possible to say that the results and, more importantly, the lessons learned do not follow any predesignated path. In fact, the expected outcome going into the game is often disconfirmed. In other words, there is a great deal of learning that occurs as the players work through how best to address given scenarios—which are specifically designed to allow for the use of existing or expected capabilities.

The broader point here is that the military employs a number of tools to determine what nuclear capabilities are required to meet future threats. Whether it is exercises, experiments or war games, these attempts to ascertain requirements are by no means stuck in the Cold War or captured by a Cold War mindset.

In fact, the results of many war games suggest that today’s military and political leaders are stuck in a post–Cold War mindset, where conventional precision guided munitions are seen as a panacea that can deter any adversary and win any war, conventional or nuclear.

One final point is worth discussing because it is so fundamental to the nuclear weapons debate. Abolitionists maintain a steady drumbeat that the cost of nuclear weapons is too high for its returns. For example, former Defense Secretary William Perry commented to the Defense Writers Group suggesting that the United States is entering an arms race that will cost more than the Cold War nuclear arsenal. Such an assertion is completely wrong.

The simple fact is, the United States plans to spend $30 billion a year over the next three decades to modernize the nuclear arsenal. This will account for less than 5 percent of the defense budget and 0.01 percent of the federal budget. At the height of the Cold War, nuclear weapons accounted for the majority of the defense budget and were the single largest expenditure of the federal government. It is also important to remember that the Cold War nuclear arms race included an ever-increasing number of nuclear weapons. Such is not the case today.