America, Turkey and Iran Could Be Headed Toward a Showdown 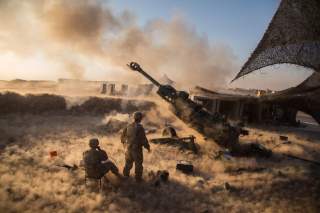 Interests of Washington, Ankara and Tehran are on trajectories suggesting accelerating clashes within and among the three states. President Trump made a congratulatory call to Turkish president Recep Tayyip Erdoğan after a controversial vote on a referendum then invited him to the White House, prompting a plethora of bipartisan criticism; also, Tehran’s agents assassinated an Iranian businessman in Ankara—Saeed Karimian, founder of Gem TV, who had previously been tried in absentia by an Iranian court.

It’s no surprise Ankara is playing down the possibility of an Iranian hit team operating on Turkish soil. Hinting it was an Islamic Revolutionary Guard Corps (IRGC) team would anger some politicians in Tehran, and what is left of the Turkish opposition media will note Erdogan’s sacking of thousands of police and security forces has left Turkey vulnerable to terrorist attacks. With the IRGC in a spat with one of the approved candidates (First Vice President Eshagh Jahangiri) in the Iranian elections this month, now is not the time the IRGC needs negative publicity about being involved in an assassination abroad.

With this breaking news in mind, consider how Washington, Ankara and Tehran are on trajectories suggesting accelerating clashes.

On April 25, 2017, Turkish planes carried out airstrikes against suspected Kurdish rebel positions in northern Iraq and in northeastern Syria, killing elements of the Syrian Kurds’ militia, known as the People’s Protection Units, or YPG, and, with errant fire, elements of the Iraqi Kurdish Regional Government’s peshmerga. The Turkish military said its goal was to prevent Kurds from smuggling fighters and weapons into Turkey. Ankara accuses members of the outlawed Kurdistan Workers’ Party (PKK) of conducting terrorist attacks in Turkey from neighboring Iraq and Syria. It considers the YPG an affiliate of the PKK. Washington expressed concerns that this action was not properly coordinated, potentially imperiling U.S. military personnel in Syria fighting alongside Syrian anti-Islamic State forces.

Washington agrees the PKK is a terrorist organization, but disputes the conclusion that YPG is a group that all parties to the Syrian conflict concur is a terrorist organization in word and deed, in part due to its membership in the American-led international coalition against the Islamic State. The Islamic State seized large parts of Syria and Iraq in 2014. Since then, the coalition has made significant gains against the terror group. Coalition forces have been relying on the ground forces of the American-backed and YPG-dominated Syrian Democratic Forces (SDF) and are closing in on the de facto capital of the Islamic State, the city of Raqqa, Syria.

Iran and Turkey share with the United States opposition to the Islamic State and to increased Kurdish autonomy—an independent Kurdish state is, for Tehran and Ankara, unimaginable. Still, they approach each other warily in cooperation against Islamic State and Kurdish rebels—more frenemies than partners. This situation is partially due to widely different relations of the state to religion in each country: in Turkey, the elected president dominates religious leaders; in Iran, the Ayatollahs dominate the political leaders. Washington’s approach to how Iran and Turkey conduct their respective military operations in Iraq and Syria needs to reflect the joint and competing interests of the two coalitions in northern Iraq and in northeastern Syria.

An example of the accelerating clash of American and Iranian interests in Iraq is praise Iraqi president Fuad Masum gave to Iran. Per MEMRI on March 28, 2017, Masoum “hailed Iran for the effectual supports [sic] it has provided for the Arab country in the fight against terrorism [and stressed] that . . . Iran’s Islamic Revolutionary Guard Corps (IRGC) commander Gen. Qasem Soleimani is in Iraq as part of Baghdad’s plan to get help from foreign-military advisors.” Then, on February 7, 2017, to counter Iran, the Trump administration is considering designating the entire IRGC as a Foreign Terrorist Organization, rather than only individuals or units, some of which are currently designated, according to Reuters.

Note that Turkey is not a member of the U.S. coalition fighting the Islamic State in Iraq, though Ankara is a member in Syria. Turkey’s Special Forces present in northern Iraq to counter PKK and Turkmen population from Mosul and immediate vicinity thereof give Turkey incentives for coordinating with the anti-Islamic State coalition in northern Iraq. President Erdogan expressed regret for the peshmerga fighters killed when Turkish warplanes bombed Kurdish fighters in Iraq and Syria on April 25. This forceful operation exacerbated the complications for the U.S military campaign against the Islamic State, revealing difficulties inherent in the three-way competition among Ankara, Tehran and Washington.

On March 8, 2017, Hashem al-Mousawi, spokesman for the Iranian-backed Iraqi Shia militia al-Nujaba, gave an interview to Iran’s Tasnim News Agency. He highlighted the militia’s activities in Iraq and Syria. The spokesman accused Riyadh and Washington of being responsible for operations of the Islamic State. He said his militia would not permit foreign forces to remain in Mosul and accused the Trump administration of pressuring Baghdad to prevent the Shia Popular Mobilization Units (PMU) militia from entering Sunni cities liberated from the Islamic State.

In Al Monitor, on March 20, 2017, Zakiyeh Yazdanshenas penned a post, “The coming Iran-U.S. confrontation in Iraq.” In it he asked, “One key question is who will step in to fill the power vacuum in post-Islamic State Mosul. Will the United States revert to its previous retreat from the Middle East, or will it opt to reassure its regional allies by keeping at least a part of its current forces in Iraq? Will Iran seek to establish a presence in northern Iraq, either directly or through its allies?” The answer is that having withdrawn in late 2011, Washington is, and should be once again, militarily engaged in Iraq and Syria, deploying over five thousand troops and special forces, as well as spending over $10 billion combating Islamic State in Iraq and Syria.

Indeed, per Politico, on April 5, 2017, the number of U.S. forces in northern Syria has doubled since March. There are four hundred U.S. Marines and Army rangers joining the five hundred U.S. Special Forces deployed by Obama; reports suggest the Pentagon may soon request even more forces to support the assault on Raqqa. In Iraq, hundreds of American soldiers have been deployed to reinforce the assault on the Islamic State in Mosul, with more waiting in Kuwait.

Because Tehran supports large parts of the PMU militarily and financially, a PMU presence in Mosul is creating consternation in Washington about the possible expansion of Iran’s influence in Iraq.

The upshot of the militia’s allegations is that they accentuate clashes of interests by adding militias under Iran’s control to the mix. Baghdad’s oil fields are clustered in the south around the city of Basra and in various northern areas. These are regions where Iran has been expanding its military and economic influence, per Ellen Wald. Indeed, the combined power of the oil of Iran and Iraq could soon rival Riyadh’s in production capacity and total resources.

A Washington Institute for Near East Policy report of April 2011 states Iraq’s reemergence as a major oil exporter, probably at Iran’s expense, will most likely heighten tensions between the two oil-exporting nations.

First, diminish the role of Tehran by aiding development of Iraq’s oil and energy sectors. Trump seems to focus less on soft power and more on hard power. The two, however, can be combined. Trump comes from business and Tillerson is an alum of ExxonMobil; hence, they might be amenable to weave soft power and hard power together in a winning counter to Tehran.

Second, lower the temperature between Ankara and the American-supported Kurds and raise the heat on Iran. Persuade both of its allies they have more to gain as partners than adversaries, counseling restraint on each party in pursuing its interests within the struggle against the Islamic State in the Syrian Civil War. Continue to support Syrian Democratic Forces while advising the YPG not to pursue military conquests in Syria with the goal of creating an autonomous Kurdish region by force of arms; remind the Turks NATO Allies consult with each other when their personnel are close to particular targets.

Third, explore with Turkey and Russia the establishment of a demilitarized and internationally protected “safe zone” in northern Syria along the border with Turkey to relieve refugee flow and prevent bad actors under cover of refugee movement from moving into Turkey. In an interview with BBC on Apr. 28, Turkish prime minister Binali Yildirim said a resolution of the Syrian situation required efforts of “Turkey, the U.S., Russia—perhaps Iran.” Such relegation of Iran to an afterthought reveals Turkey’s understanding that its interests in Syria do not align with those of Iran—a misalignment Washington should strive to intensify.

Finally, designating the entire IRGC as one of the Foreign Terrorist Organizations, rather than only individuals or units, pushes back against Tehran. In this way, Washington sends a message to Iran that the phrase “on notice” extends beyond missile tests to armed and hostile IRGC speedboats approaching U.S. warships in the Gulf.